Pick of the week: Michelle Williams in "Meek's Cutoff"

Pick of the week: The actress stars in "Meek's Cutoff," about sexual and racial conflict on the Oregon Trail 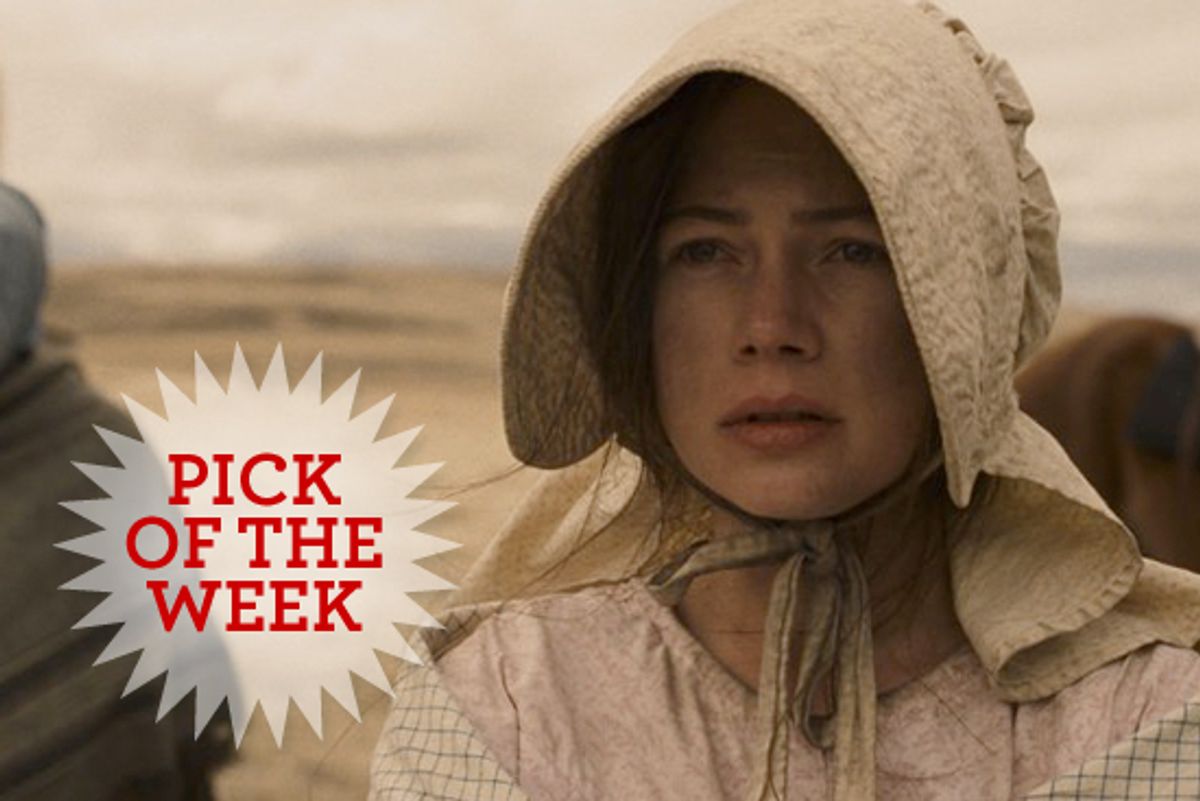 "Meek's Cutoff" is one of those movies that you're going to make a decision about within the first minute. You're either in or you're out, and you'll know which. As an opening credit stitched in embroidery tells us -- and it really is embroidery, not some digital facsimile -- we're on the Oregon Trail, in 1845. Director Kelly Reichardt's opening shot lasts at least a minute, and shows us a group of nearly indistinguishable men and women in the middle distance, wearing the shabby clothes of 19th-century emigrants, as they get their cattle and wagons across a chest-deep river. (The striking, square-screen cinematography is by Chris Blauvelt.)

There isn't any talking for several more minutes, and when we finally hear a human voice, it belongs to a small boy reading aloud from the Book of Genesis. You could say that's allegorical -- reading the Old Testament while you wander through the desert -- but it also isn't. That's very likely the only book his family brought along. "Meek's Cutoff" feels from the beginning like one of those slow-developing, deep-focus American landscape movies, of the kind identified with director Terrence Malick ("Badlands," "Days of Heaven"). It is, but it also isn't. In this quiet, beautiful and terrifying fable about a group of lost pioneers, Reichardt combines epic ambition with a focus on intimate, personal detail. While Reichardt and screenwriter Jonathan Raymond (who also co-wrote her films "Old Joy" and "Wendy and Lucy") are borrowing some real history, the events we see in the movie are only loosely based on the real-life pioneer history of Stephen Meek and his purported pioneer shortcut. (For one thing, Meek's historical group was much larger than the small band of travelers we see in the film.)

That embroidery at the beginning is no accident. As those figures we saw fording the river gradually move into the foreground and become characters, Reichardt begins to show us the domestic realities of life on the trail. This is a world where men make the decisions, at least officially. When it's a question of which direction to travel or what to do with a captured Indian or whether or not to abandon Meek (Bruce Greenwood), the grizzled and sinister mountain man who seems to have led the group hopelessly astray in the Great Basin, the wives of the three emigrant families are not consulted. But of course they're the ones who cook and share out the food, care for the sick, mend the clothes and ruthlessly dump treasured items in the arid eastern Oregon desert, as needed.

It's not like Reichardt and Raymond have set out to craft some feminist diatribe about Western history. There isn't enough talking for that, and anyway Reichardt is always more concerned with focusing on the details right than with sending a message. Emily Tetherow, the young wife played by Michelle Williams who is more or less our leading character, unself-consciously describes the group of wives as "working like niggers" -- which I guess is a political insight of a certain kind -- and views the captive Cayuse Indian (Rod Rondeaux) coerced into being their guide with as much distaste and mistrust as everyone else does. But Emily's decision to offer the Cayuse man some ordinary, practical help carries more moral weight in the film than the men's debates about whether or not to shoot him.

If you've never heard of Kelly Reichardt, that's really not your fault. She's been making movies since the early '90s, and getting better at it the whole time, but her minimalist, radically unfashionable style simply isn't going to be a hot commodity in an era of perpetual distraction. In "Meek's Cutoff" she displays a whole new level of ambition, making a period piece with an ensemble cast that features Paul Dano, Zoe Kazan and Will Patton alongside Williams, who manages to look luminous while covered in grime and wearing a yellow bonnet.

Beyond that, "Meek's Cutoff" is a film that works masterfully with space, time and history. You could call it a thriller or horror movie in extreme slow motion, or a parable that's more about America in 2011 than it is about America in 1845. At various moments it recalls Bernardo Bertolucci's "The Sheltering Sky," Erich von Stroheim's "Greed" and those verses from the Old Testament. No doubt it will bore many people silly, but its mood of desolation, danger and desperate faith affected me more powerfully than anything else I saw amid the onslaught of cinema at Toronto this year.