Both sides win when funding for women's health becomes the issue, instead of the size of government 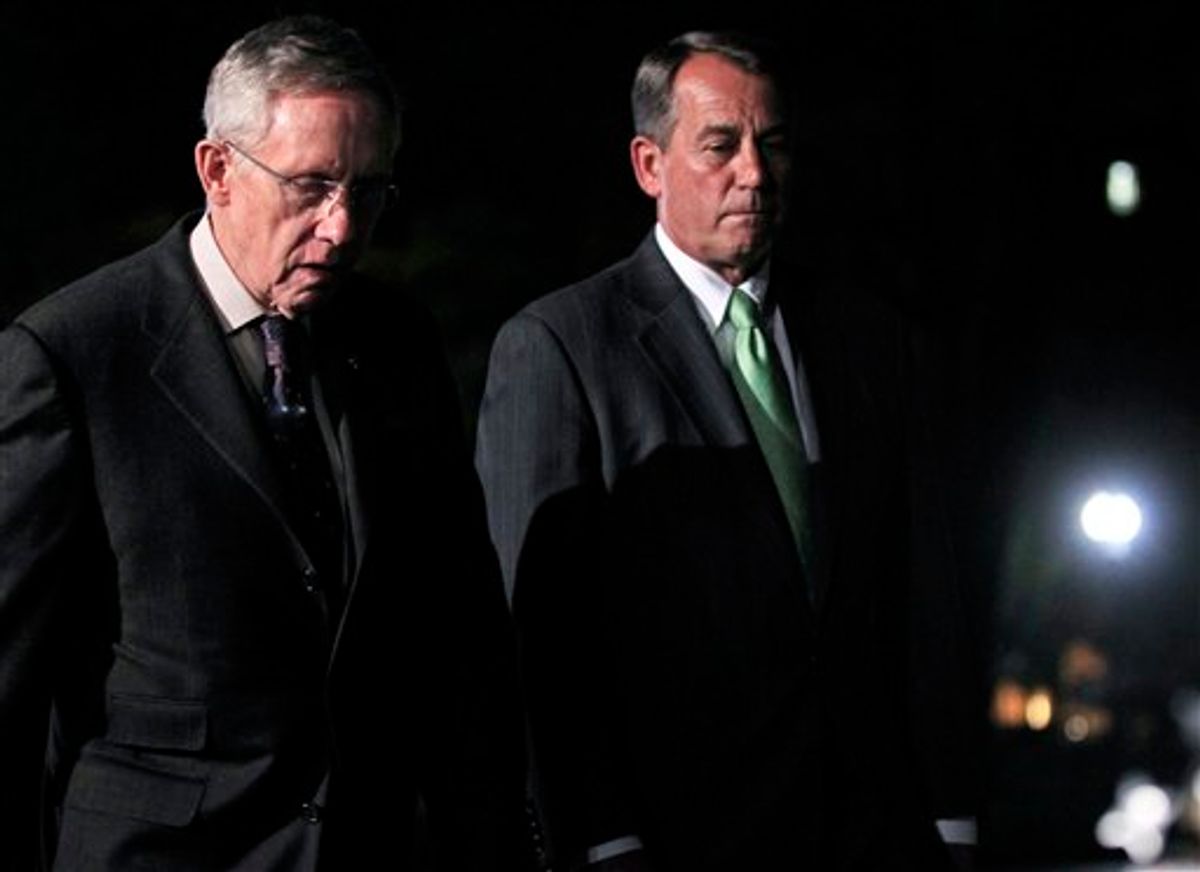 House Speaker John Boehner, R-Ohio, and Senate Majority Leader Harry Reid, D-Nev., walk out to speak to reporters after their meeting at the White House in Washington with President Obama regarding the budget and possible government shutdown, Wednesday, April 6, 2011. (AP Photo/Charles Dharapak) (AP)
--

Judging by news coverage, blog posts and my government-shutdown obsessed Twitter stream, the question of whether the U.S. government stays open for business after midnight Friday seems to have something to do with Planned Parenthood.

At least that's what Senate Majority Leader Harry Reid is telling us. By Reid's account, Democrats have agreed to an additional $38 billion worth of cuts (which, in a normal political universe, would amount to a huge Republican victory). But one major sticking point remains: the GOP's supposed insistence on cutting $300 million in funding for Planned Parenthood.

It's a good story for Reid to tell. A majority of Americans don't want a government shutdown. If Republicans end up forcing a shutdown for social policy reasons, they will suffer serious political fallout.

But it's also a convenient story for Reid to tell. By pointing to Planned Parenthood as the obstacle to a budget agreement, he sets up the distinct possibility of a last-minute face-saving deal, in which Democrats agree to even more spending cuts, but keep funding for Planned Parenthood in the budget. Democrats can then go their base and claim to have held the line on the culture war.

Plenty of Republicans do want to slash Planned Parenthood. But as Friday wears on, we're hearing a growing number of signals from Republican lawmakers suggesting that it may not actually be necessary to include cuts to Planned Parenthood in a budget deal. There's also some real question as to whether the Tea Party freshman Republicans are as gung ho for social policy cuts as they are for simple spending cuts. When Speaker of the House John Boehner disagrees with Reid, and declares that the real issue is "spending," he could well be telling the truth, because his paramount goal is to maximize the total amount of spending cuts incorporated in the deal without actually forcing a government shutdown. But what he isn't saying is that it also is fine with him if Democrats pretend that Planned Parenthood is a big problem, because that gives him an obvious negotiating chip.

Here's how the calculus works for Boehner.

1) No deal because Democrats won't agree to social policy-based cuts; government shuts down. Republicans get blamed.

2) Deal struck, but cuts aren't big enough to satisfy House Republicans, resulting in a shutdown. Republicans get blamed, Boehner probably faces a challenge to his leadership.

3) Deal struck, either tonight, or in an abbreviated time frame that minimizes the length of a government shutdown, and is approved by the House because the numbers are big enough. Republicans score a fiscal win, and are primed for the next battle.

So what's the best way for Boehner to ensure option No. 3? How about insisting, for as long as possible, on cuts to things like Planned Parenthood that Democrats will never agree to, before giving in at the last minute in return for another few billion in cuts?

Planned Parenthood is not really going to be responsible for a government shutdown. But it suits both sides to make it seem like Planned Parenthood is a big deal, because then Democrats can claim to have saved it, while Republicans get what they really want, which is the biggest spending cuts possible.