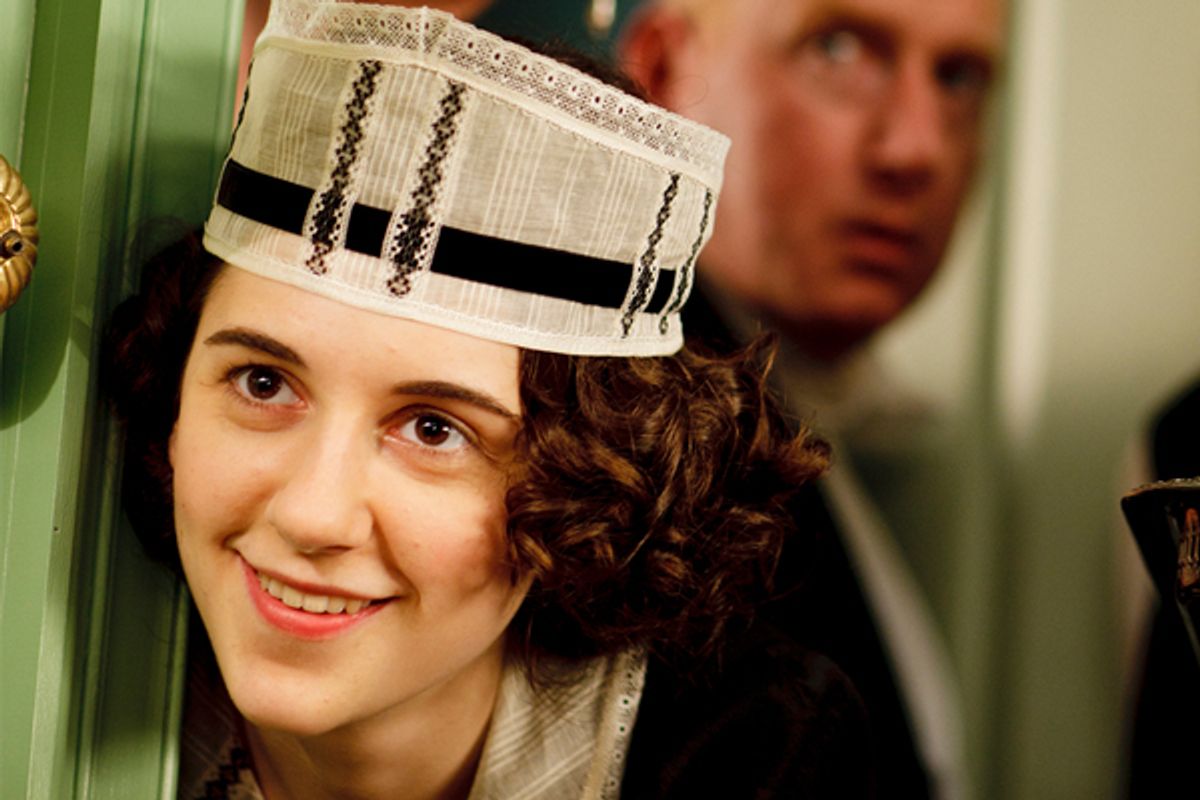 Before praising the fine writing, acting and direction on the new "Upstairs Downstairs" (Sundays April 10, 17 and 22, 9 p.m./8 Central) on PBS' "Masterpiece," can we all take a moment to acknowledge that Americans' continued fascination with this sort of story is more than a little bit sick? It's English class system melodrama as comfort food.

I love the idea of an intimate epic about masters and servants living in the same house -- especially one that gives their stories more or less equal screen time, and that deftly transitions between them to suggest that when you factor out class differences, we're all driven by the same things. But in rewatching parts of the first series and the first three episodes of this new one, the overriding sense of warmth, nostalgia and comfort started to gnaw at me. Much more so than the original, this very belated, three-part update is a somewhat too enamored portrait of a stratified society that the United States supposedly fought a bloody revolutionary war to escape.  All of which means that, like its predecessors, "Upstairs Downstairs" will no doubt be a ratings bonanza for PBS, which was so unabashedly Anglophilic in its early years that its name might have been an acronym for Prefers British Stuff.  (That said, I wonder if the January 2011 stateside premiere of the very similar "Downton Abbey" -- by Julian Fellowes, who won an Oscar for writing the very "Upstairs Downstairs"-like "Gosford Park" -- might not have stolen some of its thunder.)

Set chronologically from Edwardian times through 1930, the original chapters of "Upstairs Downstairs" wove their events into history (three characters in the second series died in the sinking of the Titanic) and ended with a domestic/economic meltdown that didn't so much segue out of the narrative as obliterate it. These three new episodes, which premiered in Britain last year, are engaging, tasteful and very well-made. The production values are leagues beyond anything seen in the previous show. With its faster cutting, elegant camera moves and lavish production values (there's even a bit of CGI in the exteriors) what's on-screen looks, feels and moves more like a feature film than the original, which had the long-take, no-frills style of a live TV drama. I'm not over the moon about it; my preference in master-servant stories runs more toward "The Remains of the Day" and "Gosford Park," which have a more prankish and sometimes bitter undertow. But as a production, it's tops; your mileage, as I like to say, will vary.

The new cast is headed by two new aristocrat characters, newlyweds Hiram Holland (Ed Stoppard, son of Tom) and Lady Alice Holland (Keeley Hawes). Sunday's premiere is set in 1936, six years after the end of the last batch of chapters. It feels less like a continuation than a reboot; it starts with Lord and Lady Holland moving into the now-empty 165 Eaton Place, knocking the dust out, hiring a new staff and setting about reestablishing the place (and establishing themselves) on London's diplomatic party circuit.

Like "The Remains of the Day," this one delves into the uneasy domestic politics of the period. In addition to the expected references to Wallis Simpson and King Edward VIII, these three chapters get into the U.K.'s flirtation with Hitler and the effect of Oswald Mosley and the British Union of Fascists on domestic politics; the second episode revolves around the arrival of a Jewish maid who fled the hell of Germany. Joachim von Ribbentrop is a significant minor character, and throughout, there's a tension between the Hollands' desire to shine as party hosts and their need to be on the side of moral right.

Eileen Atkins (of the original series) returns playing Lord Holland's globetrotting, fearsomely judgmental and interfering mother, who takes advantage of a clause in her last husband's will promising that her son will take care of her. She brings her Indian servant, Amanjit (Art Malik), plus a small monkey that scampers all over everything. When Alice asks her husband why he never stands up to her, he replies, "I was raised to be polite to strangers."

On the servant side, we have Rose Buck (Jean Marsh), another of the stars and  co-creators of the original series. Now she's in charge of the house's internal workings; it's fun to see her try not to be aghast at the Holland's naive and often penny-pinching staffing decisions, given all her hard-won experience.  There's a sexy and somewhat goofy housemade named Ivy Morris (Ellie Kendrick), a super-competent but very anxious butler named Mr. Pritchard (Adrian Scarborough, a "Gosford Park" veteran), an unflappable cook named Mrs. Thackeray (Anne Reid), a dashing chauffeur named Harry Spargo (Neil Jackson), and a likable but troubled footman named Johnny Proude (Nico Mirallegro) who has, well, secrets.

As was often the case before, this side of the story is earthier and livelier than the aristocrat side of things. There's a really sexy (if chaste) bit near the end of the first episode involving a couple of characters flirting with each other through the slot at the base of a bedroom door, and wonderful details that will come in handy if you ever need a way to, say, chase off an undesirable houseguest while maintaining plausible deniability.  It's all damnably delightful in the way that only English narratives about the inevitability and easy familiarity of the class system can be. In an interview, Marsh said that they only made three episodes as a test, and that more would be produced if the public liked what it saw.

That's understated English humility if I ever heard it. Even if these new episodes were terrible, they'd find an audience at home and in the former British colonies; over here, we talk about a classless society, but we love us some master-servant relation stories, especially ones where the subtext is that things are the way they are for a reason, and you mess with protocol at your peril. Sunday's premiere has a scene that boils the essence of "Upstairs Downstairs" down to a single line: Lady Persephone "Persie" Towyn (Claire Foy), Lady Agnes' kid sister, is going for a ride in a limo, and hops right into the passenger seat next to the chauffeur, Harry. He refuses to move until she sits in back, and before they pull out, he tells her, "The thing is, Lady Persie, there are rules, and you've got to stick to them as much as us."