The essential guide to "Game of Thrones"

As HBO's entertaining new miniseries approaches, here's what you need to know about the books that inspired it 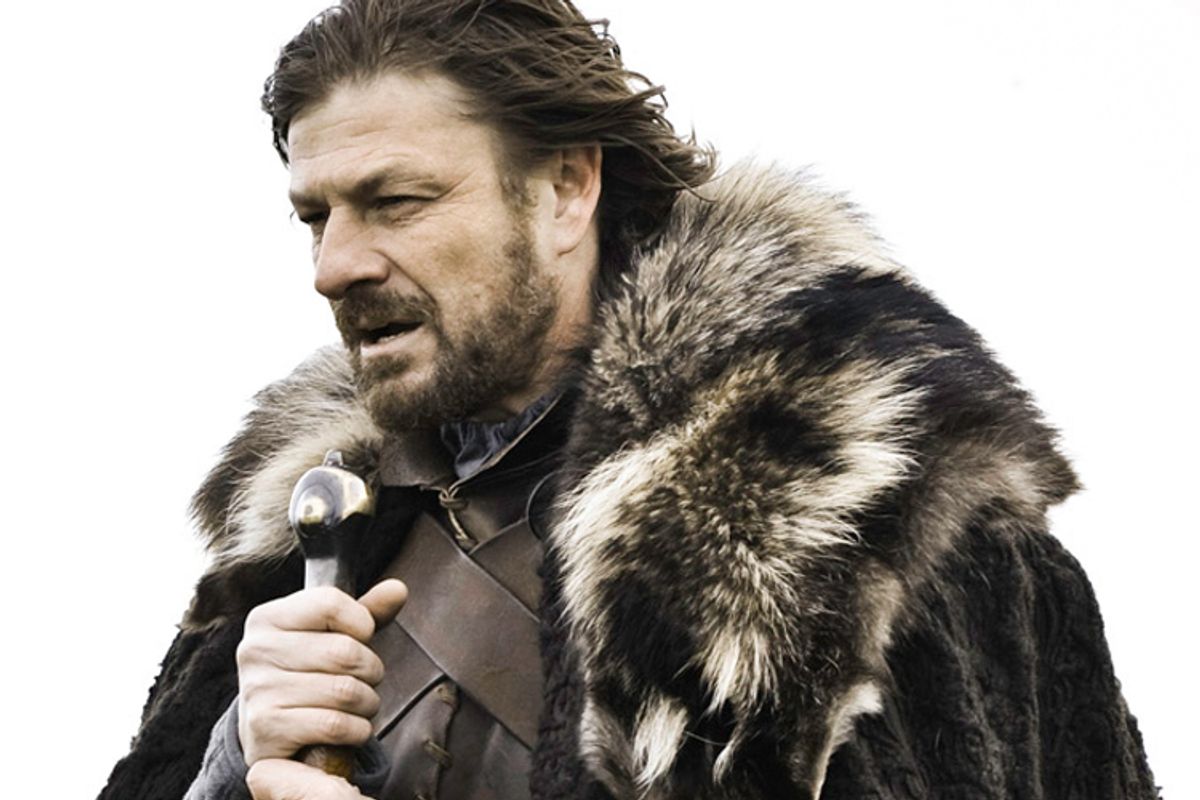 If ever there was a fantasy series ripe for HBO's plucking, it would have to be George R. R. Martin's "A Song of Ice and Fire," set to debut April 17 on the cable network as "Game of Thrones.") The first four volumes of "A Song of Ice and Fire" -- ("A Game of Thrones," "A Clash of Kings," "A Storm of Swords" and "A Feast for Crows") overflow with gratuitous sex and violence -- just the kind of fare we've come to expect from the small-screen boundary-pushers who gave us "Rome," "Deadwood" and "True Blood." Brothels, dragons and more decapitations than you can count: What more could a jaded television audience possibly want?

It's certainly no shocker to note that the fantasy genre has come a long way since "The Lord of the Rings"; the quantity of graphic sex and violence in your typical adult-targeted sword-and-sorcery extravaganza has risen steadily for decades. But Martin's fantasy saga demands a literary classification almost all its own -- call it, for better or worse, realist fantasy.

"A Song of Ice And Fire" is to normal fantasy what "The Wire" was to typical cops-and-robbers drama, packed with grit, complexity and flawed human beings making their way through a corrupt and intimidating world. Heroes die, villains triumph, peasants and slaves suffer horribly and knights are as likely to be plate-metal-encased thugs and hoodlums as they are noble icons of chivalry. Loosely modeled on a medieval-era England ravaged by the Wars of the Roses, Martin's world does not gloss over the starvation, rape and murder that follow in the wake of war. The class stratification and brute injustice of feudal society screams out of nearly every page. The HBO catchphrase for the series is "Game of Thrones: You Win or You Die," but the truth is that the vast majority lose when the mighty roll the dice.

Martin's plotting is intricate, compelling and full of surprises -- and, if you're not keeping close track, at times it can be completely bewildering. The paperback edition of the fourth volume, "A Feast for Crows," includes a list of characters that's 70 pages long! Since, judging by an advance look at the first handful of episodes, HBO's treatment of the text is scrupulously faithful -- and terrifically entertaining in the best HBO high drama tradition -- newcomers to the story are likely to have some trouble figuring out just what the heck is going on.

But have no fear, Salon can help! If you're not afraid of massive spoilers, here's a quick guide -- in the vein of what we've done for "Inception," "The Wire" and "Battlestar Galactica" -- to the history, major characters and key plot points of "Game of Thrones."

The vast majority of action in "A Song of Ice and Fire" takes place on the continent of Westeros, which can be imagined as a loose analogue to Britain, only larger.

For thousands of years, Westeros has been divided up into a handful of small feudal kingdoms constantly warring with each other, except when joining forces to combat a mysterious enemy in the far North known only by the scariest of postmodern constructions: "the Others."

But the Others have been absent from the scene for millennia. Three hundred years before the present day (that is, when the story line of "Game of Thrones" commences), Westeros is conquered from an entirely different direction. Swooping down from the sky on fire-breathing dragons, Aegon Targaryen the Conqueror and his two sisters, Rhaenys and Visenya, lead an invading army that crushes the indigenous resistance. The new Targaryen dynasty fits neatly on top of the exiting feudal order -- think Plantagenets, except with dragons.

To keep "the blood of the dragon pure" the Targaryen royal family follow the Egyptian Pharaonic habit of requiring intermarriage between sister and brother. A couple of centuries later, the inbreeding delivers predictable outbreaks of physical deformity and mental illness. The last ruling Targaryen -- "Mad King Aerys" -- is so over the top in his Caligula-like insanity that he provokes a successful rebellion led by three of the most prominent families of the pre-Targaryen era -- the Baratheons, Starks and Lannisters. (By this point, the family dragons have all died out, which greatly simplifies the uprising process.)

Our story begins about 15 years after the rebellion that overthrew the Targaryens. Robert Baratheon is king, married to Cersei Lannister. His close ally and friend, Ned Stark, resides in the castle of Winterfell in the harsh North, not far from a magnificent Wall carved out of ice many centuries earlier to protect the lower kingdoms from the depredations of the Others. The last surviving members of the Targaryen family, Aerys' heirs, the none-too-stable Viserys and his blond teenage bombshell sister Daenerys, have been smuggled to another continent, where they seek allies who will help them regain their kingdom from the Baratheon usurper.

Got that? Evil to the north (along with giants and woolly mammoths), revenge-minded Targaryens (and dragons!) waiting in the wings across the sea, and total chaos in the old kingdom as an anarchically shifting assembly of factions battle each other in a frantic, endlessly destructive struggle to seize and hold power.

Hereditary rulers in the north out of their castle Winterfell, the Starks provide the moral and dramatic center of "A Song of Ice and Fire."

How popular is "A Song of Ice and Fire" really? And why?

Bantam, George R. R. Martin's publisher, reports that 4.5 million copies of the first four volumes are currently in print. Martin noted on his blog last October that the paperback edition of the first volume, "A Game of Thrones," was in its 34th printing and had surpassed the 1 million mark. Volume 4, "A Feast of Crows," went directly to the top of the New York Times fiction bestseller list after publication in 2005. Presumably boosted by the publicity associated with the HBO series, "A Game of Thrones" appeared on the paperback fiction bestseller list two weeks ago, and is currently in the 12th position.

The success is all the more remarkable because when the series debuted in 1996, it did so without mass market publicity or any kind of buzz in the fantasy/SF scene. George R. R. Martin earned his following the hard way, by word of mouth, by hooking his characters into the psyche of his readers to an extent that most writers of fantasy only dream of.

Bad things happen in "A Song of Ice and Fire" -- but maybe that offers a clue as to why readers seem to care so much. We don't know what's going to happen next, which makes us even more desperate to turn the page. As Laura Miller reports in the New Yorker, Martin has taken so long writing the fifth volume, "A Dance of Dragons" (due out this summer), that some of his fans have turned against him, angry at what they see as his breach of authorly duty to their obsessions. Could there be any greater affirmation about how deep a chord Martin has struck?