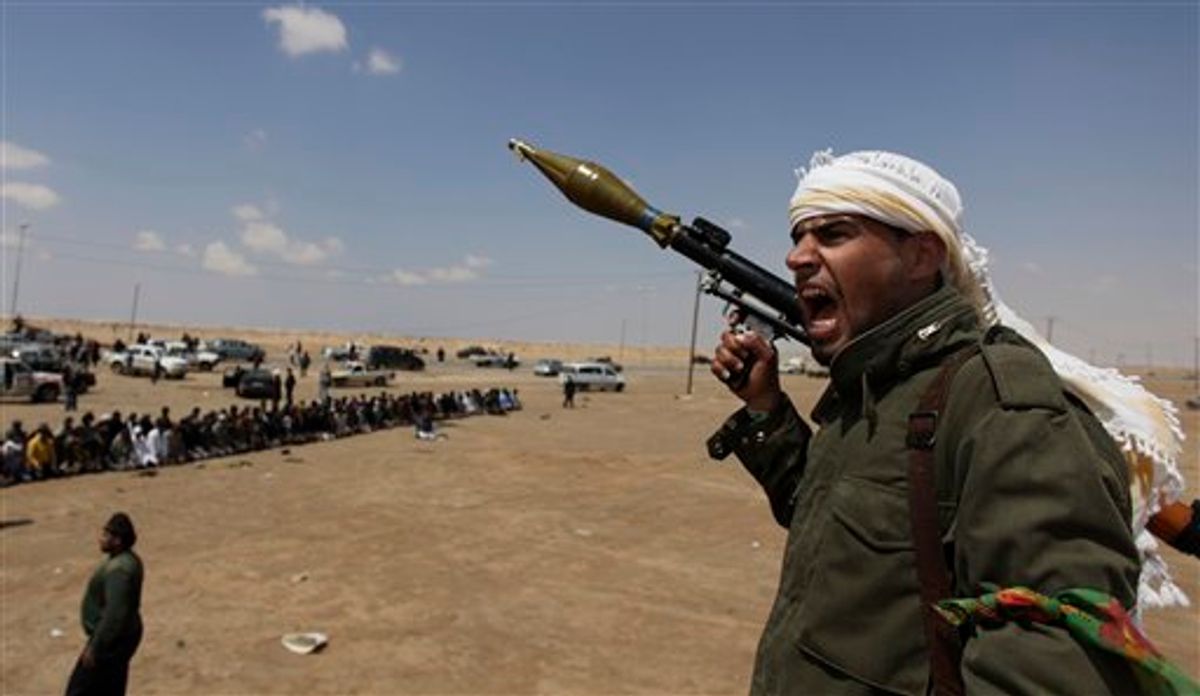 Libyan government troops shelled rebels' main front-line outpost and advanced in guerrilla-style units Saturday, killing at least three opposition fighters in what appeared to be their most serious push into the heart of rebel territory since international airstrikes began.

NATO responded to the advance on the eastern city of Ajdabiya with an airstrike that kicked up a huge mushroom cloud. Government troops' intense shelling dropped off after that, but soldiers moved into the town in civilian cars and trucks in an apparent effort to foil NATO pilots.

Recapturing Ajdabiya would give the Libyan military a key staging ground to attack the rebels' de facto capital, Benghazi, about 100 miles (160 kilometers) farther east along the coastal highway. Moammar Gadhafi's forces were approaching Benghazi when they were driven back by the international air campaign launched last month to protect civilians and ground Gadhafi's aircraft.

The push into Ajdabiya was launched even as international envoys opened fresh initiatives for a peace deal. The African Union said it planned to send a team to Libya on Sunday to begin meetings with the government and rebel leaders.

In the capital Tripoli, meanwhile, Gadhafi made his first public appearance in weeks with a visit to a school. Children went into a frenzy to welcome him, jumping on desks and giving fist-pumping chants: "The people want Moammar the leader!"

Gadhafi -- wearing large black sunglasses and a brown turban and robe -- made no public comments, according to the account on state TV. Gadhafi has remained mostly in hiding since the airstrikes began, preferring to communicate by telephone to government-run television.

The rebels have maintained control of much of the eastern half of Libya since early in the uprising, while Gadhafi has clung to much of the west. Gadhafi has been putting out feelers for a cease-fire but he refuses to step down as rebels demand.

A NATO official in Naples, Italy -- the headquarters for the Libyan mission -- said the airstrike near Ajdabiya was launched to try to halt the shelling of the city, which had about 150,000 residents before many fled for safer areas. The official spoke on condition of anonymity under standing regulations.

The NATO-led airstrikes, authorized by a U.N. resolution, have neutralized Gadhafi's air force and pummeled his ground forces, but the opposition remains outnumbered and outgunned. The alliance has been defending itself against rebel complaints that its attacks are too slow and imprecise.

In London, the British military said its warplanes hit seven tanks around Ajdabiya and the rebel-held city of Misrata in western Libya on Friday as part of the NATO-led mission.

A rebel fighter, Salah Ali, said Gadhafi's forces were "spreading out inside Ajdabiya" with weapons including heavy machine guns and grenade launchers.

Rebels returned fire with rockets and machine guns after retreating to the outskirts. Some rebel reinforcements arrived at sunset.

The supervisor at Ajdabiya hospital, Mohammed Idris, said at least five rebels were killed and six people were injured, including a civilian.

The pro-Gadhafi offensive marked a quick turn of fortunes for the rebels.

Just hours earlier, they had pushed deeper toward Brega, a town west of Ajdabiya that has been a key prize in the back-and-forth battles with government forces. Rebels say they took two prisoners after a clash with soldiers near Brega's Bright Star University, outside government-controlled oil facilities.