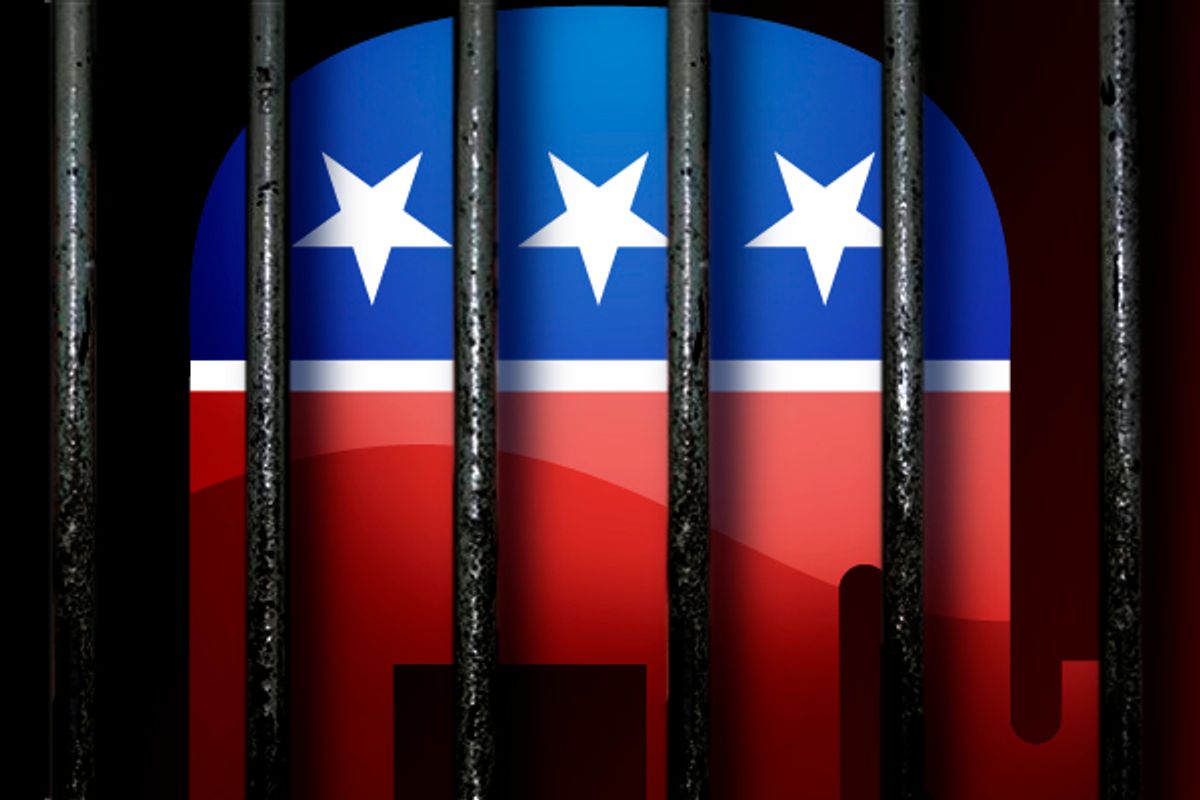 Last week, disgraced former congressman Duke Cunningham wrote a letter to several media outlets from the federal penitentiary where he has resided since 2006. In it, Cunningham, a conservative Republican who pleaded guilty in a public corruption case in 2005, waxed eloquent about an unlikely topic: prison reform.

"The United States has more more men & women in prison than any other nation including Russia and China," he wrote. "The largest growing number of prisoners, women -- 1-34 Americans are either on probation or in prison. The 95% conviction rate reached by threats of long sentences, intimidation, lies and prosecutorial abuse has got to be reckoned with now, not later." Cunningham also promised he would dedicate his life to prison reform.

We've seen transformations like this before. Cunningham is the latest in a string of conservative political figures to see the light on prison reform following a stint behind bars.

Right-wing media mogul Conrad Black, for example, did two years' hard time after being convicted in a 2007 fraud case. Following his release in 2010, Black has written passionately about prison reform.

While incarcerated, he learned "of the realities of street level American race relations; of the pathology of incorrigible criminals; and of the wasted opportunities for the reintegration of many of these people into society. I saw at close range the failure of the U.S. War on Drugs, with absurd sentences, (including 20 years for marijuana offences, although 42% of Americans have used marijuana and it is the greatest cash crop in California.)."

And, of course, Nixon aide Charles Colson devoted his life to criminal justice reform -- and spreading Christianity among prisoners -- after serving seven months in 1974 for obstruction of justice in a Watergate-related case. Colson's Justice Fellowship organization lobbies for better conditions in prisons and reform of sentencing and the criminal code. The head of Justice Fellowship is Pat Nolan, a former conservative law-and-order Republican in the California assembly who devoted himself to prison reform after serving 29 months for corruption in the 1990s.

To learn more about this trend -- as well as the more general role of the right in prison reform efforts -- I spoke with Douglas Berman, a professor at Ohio State's Moritz College of Law and the proprietor of the Sentencing Law Blog. The following transcript of our conversation has been edited for length and clarity.

What explains the phenomenon of conservatives who have gone to prison and come out as prison reform advocates?

I think it's a combination of the discovery that prison is harsher and starker than they have anticipated, and their personal experiences going through the system -- getting sentenced to prison and experiencing the humanity that's there. It makes them appreciate that the good vs. evil dichotomy doesn't capture the nuanced reality of prison. There are some good people that get sent to prison, and some evil people who don't. It's essential to the usual conservative ideology that's tough on crime to think, "There are the good people that the politicians need to protect from the bad people. And the bad people go to jail." Going to prison and experiencing that nothing is ever that black and white plays a significant role in conservatives coming out and becoming reform advocates.

What about religion; how much of a role does it play in these conversions?

I think for a certain set of religiously oriented conservatives, in particular for evangelicals, the notion of redemption or the possibility of restoration plays a big role. Even if we do have an instinct that "some people are just evil," that doesn't undermine their belief that even evil people can be redeemed and change their ways. The religious overtones also inform the instinct that society and individuals are judged not by how they treat the best off, but by how they treat the worst off. That's another discovery for anybody who spends time with people who get caught up in the criminal justice system. Disproportionately, it's folks who suffer from poverty and less education and addictions and mental health issues. A spiritual or religious commitment to have society take care of those who are least able to take care of themselves can kick in as well.

Does political support for prison reform tend to break down along traditional left-right lines?

Historically there were certainly periods when prison reform became very much a left-right issue. But there have also been periods when Democrats concluded they couldn't afford to be portrayed as soft on crime. Bill Clinton pioneered this two decades ago at the presidential level. At that time, Democrats began talking the tough game and beating their chests. The death penalty indirectly played a role in this when, in the 1988 campaign, Dukakis was portrayed as soft on crime and that seemed to resonate. Clinton, in running in 1992, along with some other more conservative-leaning Democrats, recognized that crime was particularly problematic as a social issue for Democrats. The Clinton administration was among the toughest not just for Democrats, but in general. That runs the gamut from death penalty to mandatory minimum sentencing to other issues.

The first set of tough-on-crime reforms in the federal system goes back to the mid-'80s and the Reagan administration. But in that era Democrats controlled both houses of Congress. So really by the mid- to late-'80s -- partially because of increasing crime rates -- Democrats were growing less and less sympathetic to progressive approaches to crime and punishment. That's when, under both parties, the increase in the prison population started to take off. That accelerated and really has led to what's now known as "mass incarceration" -- a truly stunning percentage of Americans locked behind bars. Both parties came to view that getting tougher and tougher on crime produced political benefits. That's why this issue can rarely be simplified in left-right terms.

What are the major issues in the arena of prison reform right now?

There are three enduring issues that are on everyone's mind right now. First is the costs and use of imprisonment. There has often been concern about using prison for low-level offenders because of human costs. But in times of recession, the economic costs of prisons are true budget-busters, particularly for states. The NAACP just released a report emphasizing that as states have spent more dollars on prison systems, they've had less money to spend on education and other social services. Just about every state legislature across the country -- particularly those that have been distinctly tough in the past -- is struggling with how to afford to continue to incarcerate so many people. They're asking, "How can we sensibly let some folks off or try different approaches?"

That leads to another enduring issue: What is the efficacy of imprisonment relative to alternative sanctions? There's always buzz about using community treatment centers instead of prisons for drug offenders, for example. When it's addiction or related social problems that are driving people into crime, should we be attacking those social problems instead of falsely hoping those problems will go away if we lock someone up in a prison cell? There's some new research about how we can use "smart on crime" or evidence-based policies to figure out which people are at the highest risk to be violent or commit crimes in the future.

The third enduring issue is the way in which race and class and gender impact the operation of criminal justice systems. There's absolutely no doubt that minorities are disproportionately incarcerated -- and disproportionately incarcerated for long periods of time. Some people will say that's mostly a function of offending rates. But a sophisticated analysis shows that, no, it's really a byproduct of society's willingness to imprison for longer periods those offenses that are associated with minorities. There's the long-standing debate about crack sentencing versus powder cocaine sentencing, but that's just the tip of a broader iceberg.

So is this a hopeful moment for advocates of prison reform?

Yes, I think it very much is.

And is it coming primarily from left or right?

Both. The bills have come due. There were a lot of laws where legislators got the political benefit of saying, "I'm increasing sentences" -- and the costs don't come until a decade later when the sentences are increased and the prison populations are bursting. On both the left and the right, there's a recognition that the rhetoric and demagoguery about "tough on crime" can no longer be done without an extraordinary expense. That said, the politics are still tough. It's awfully hard for a legislator or president or governor to say, "It's important to change the way we deal with crack dealers or sex offenders or violent criminals." While it's as hopeful a moment as we've had in recent decades -- and that's added to by the fact that crime rates are at historically low levels -- it's awfully easy to get the very forces that led to the enactment of these severe laws revved up again. So my optimism is always tempered by the fact that the political forces that drove mass incarceration are always lurking.