What Charlie Sheen could learn from Dennis Quaid

In Newsweek, the actor writes about his experiences using cocaine -- and the downside to being a famous bad boy 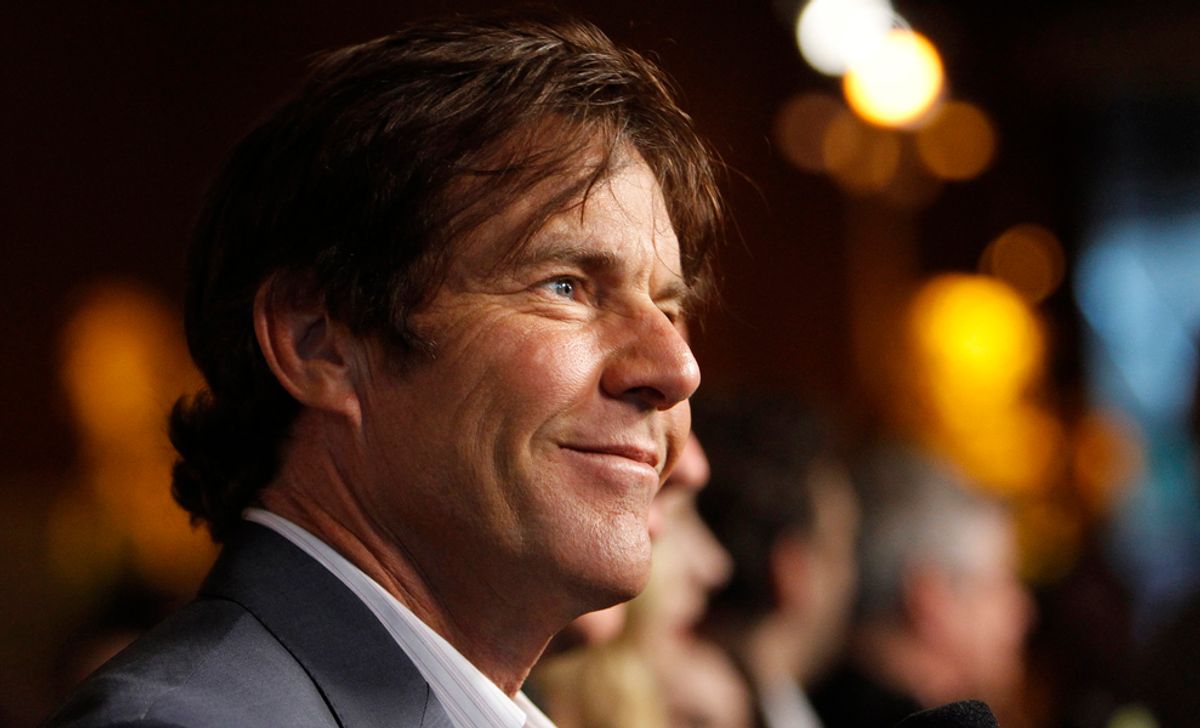 Cast member Dennis Quaid is interviewed at the premiere of the movie "The Special Relationship" at the Director's Guild of America in Los Angeles May 19, 2010. REUTERS/Mario Anzuoni (UNITED STATES - Tags: ENTERTAINMENT) (Â© Mario Anzuoni / Reuters)
--

"I had a reputation for being a 'bad boy,' which seemed like a good thing, but basically I just had my head stuck up my ass." Is this a quote from Charlie Sheen, circa 2035? No, it's a not-so-surprising admission from another notorious Hollywood partier, Dennis Quaid, in a short essay called "My Favorite Mistake" for this week's Newsweek.

The timing of Quaid's candid confession is surely not random -- he's got a new movie, "Soul Surfer," to promote, and a few well-timed anecdotes from one's more hell-raising days can never hurt a guy in drumming up a little interest. What else do "20/20" interviews exist if not to give celebrities a platform for which to reveal their expensive, debauched old habits, their brave struggles, their fresh hopes, and their new movies -- opening this week in theaters nationwide, so check your local listings?

Quaid's Newsweek story is unique in its utter lack of "as told to" polish. Just three paragraphs long, it reads more like an off-the-cuff AA qualification than an eloquent back page essay. It's an unusual piece of writing to wind up in a major magazine – not many Columbia J-school grads could construct a sentence like: "Coming from where I came from—lower-middle-class life, from Houston into Hollywood—and all of a sudden this success starts happening to you, I just didn’t know how to handle that."

But that amateurishness gives Quaid's words a refreshingly unvetted authenticity. It may not seem especially daring for a man who went into rehab back 1990 to spill his anecdotes of being on movie sets where cocaine was part of the "petty cash" budget, or  feeling like a "a little squirrel on one of those treadmills" (maybe you'd have to be a cokehead to understand), Quaid nevertheless has the recovering addict's gift for making the experience seem as fresh in his mind as the day he quit.

And he very tellingly reveals one of the great inconvenient truths of recovery – that the whole "it gets better" thing isn't an overnight piece of magic. "No, it got worse!" he admits, referring to the professional nosedive his life took in the early nineties. "Wilder Napalm," anyone? You want to know why, aside from the obvious issues of physical and emotional dependence, someone would resist getting help for a life-threatening drug or alcohol problem? Because, as Quaid's saga shows, it rarely looks like a whole lot of fun. What if you give up your vices and it turns out nobody's interested in a former hellion?

Quaid's trip to rehab may have been 21 years ago, but that potential stigma, the possibility of failure, is just as real an issue now – even bigger. Careers continue to be built of the image of the out-of-control party monster – what incentive does Charlie Sheen have to be normal, now that crazy's become his industry? How would anybody get on reality television without drunkenness, addiction, and inappropriate behavior? Vice may ravage the brain and the bank account, may inspire one to do what Quaid calls his "best imitation of an asshole," but there's always a market for assholes.

In Newsweek, the actor says that getting straight taught him "humility," a quality neither commonly found nor highly prized in the entertainment industry. And he admits he doesn't know if he'd still be acting at all if he hadn't cleaned up. Quitting drugs isn't glamorous or exciting or easy, and Quaid will never sell out Radio City on the strength of ego and incoherence. But he's got two decades of being healthy enough to raise his kid and do some amazing work in movies like "Far From Heaven." He's got two decades he might not otherwise have had, period. And while he isn't the greatest freelance writer Newsweek ever hired, that nevertheless makes his story one of its most eloquently persuasive.