A grand finale for "Mildred Pierce" 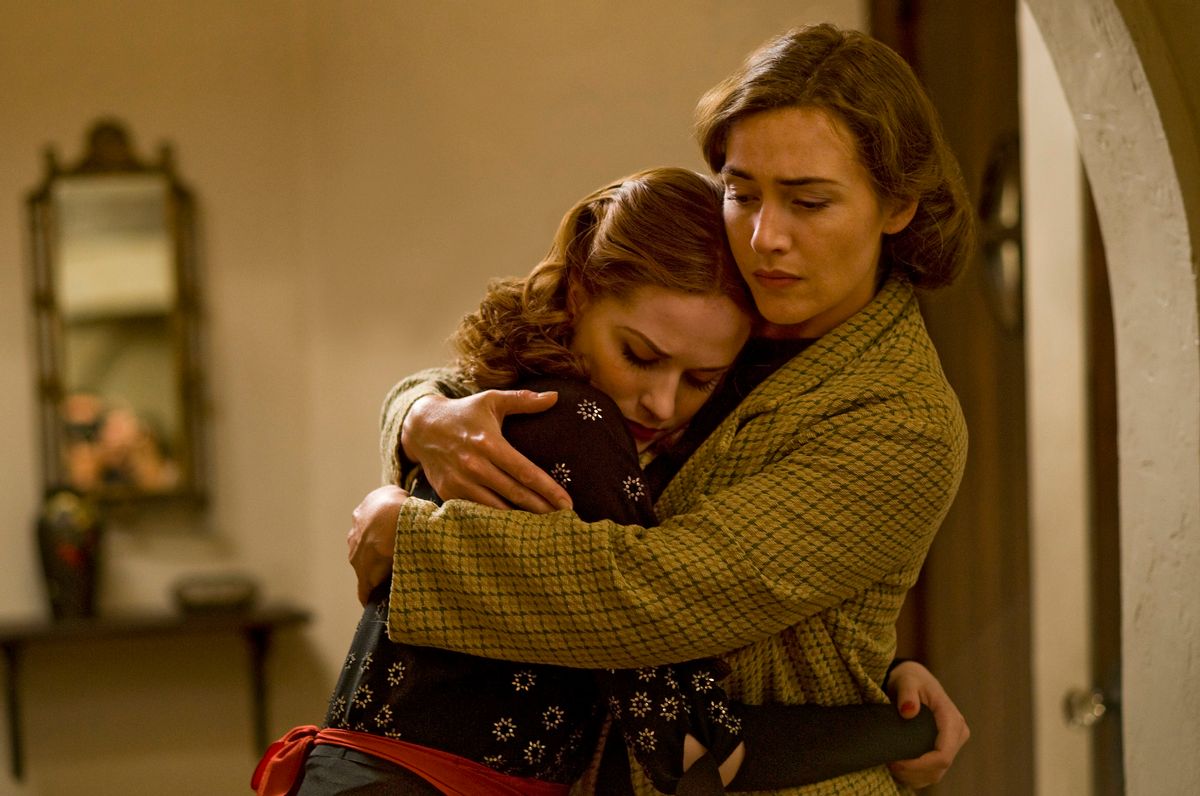 There was so much great filmmaking in last night's "Mildred Pierce" finale that I could spend all morning appreciating it, but for illustration's sake, I'll let one example suffice: the scene where Mildred (Kate Winslet) and Bert (Bryan O'Byrne) eat at the new seaside restaurant and hear the voice of Veda (now an opera singer and played by Evan Rachel Wood) coming through the radio. Director Todd Haynes, his cinematographer Ed Lachman, and the actors are at peak strength. I love the shot over Mildred and Bert's shoulders of the radio broadcasting the music (it has talismanic power), and the close-up of Mildred staring at the radio and listening to it, half the frame blocked out by the back of the radio. I love the long tracking shot of the stunned Mildred walking to the seaside. Most of all I love that final profile shot of Mildred staring out at the sea at night, after which the camera tracks right. The screen fills up with blackness that expresses the void Veda's absence created in her mother; there's also a concurrent sense that Mildred's emotions are casting themselves out into the blackness, or onto the ocean, in a kind of cosmic reaching-out.

I said it before and I'll say it again: This miniseries is a masterpiece.

And as we gather for the third and final meeting of The Mildred Pierce Club, I am aware that this is a minority opinion. There doesn't seem to be much middleground in responding to "Mildred Pierce." Most of my critical colleagues were impressed-but-not-moved or else downright dismissive. The word I keep seeing over and over and over -- not just in their reviews but in comments threads  -- is "slow."

What did you think, readers? I didn't think it was slow, not at all; I thought the pacing was perfect. I'd use the word "deliberate" rather than slow (though this might be a distinction without a difference). I suppose there are a lot of places where Haynes and company could have picked up the pace, or gotten to the point faster. But I didn't want them to. For me the filmmaking was mostly precise and meticulous and sometimes (as in that seaside scene) majestic, operatic -- almost decadent in its willingness to go inside a moment, linger there, and let you experience Mildred's shifts in emotion as they happened. That moment at the seaside, for instance, could have been wrapped up in about two minutes. But it went on much longer, and I was glad it did. It had an operatic power, not just because of the glorious music coming out of the radio, but because it was all about what we might call "the musicality of the moment."

What did you think of the central relationship, Mildred and Veda? I had an interesting conversation with a friend last night who said he didn't understand the constant obsession (among critics and viewers) with whether or not Veda was a "believable" character or whether Mildred and Veda's interaction was "realistic." "She is not supposed to be taken literally, if you know what I mean," he said. "The way Haynes envisions her, she's almost like this manifestion of all of Mildred's fears. She doesn't talk like anybody else in the miniseries. Everything she says sounds like it could be Mildred's insecurity talking. When they talk to each other it's almost like Mildred is talking to herself."

I think that's spot on; in these final two episodes, particularly, Veda reminded me (in a strange way) of Iago in William Shakespeare's "Othello." There's nothing "real" about Iago. He's a demonic force whose sole purpose is to torment Othello. "I hate the Moor" is the only thing Shakespeare gives us in the way of psychological exploration, or explanation. Iago isn't explicable -- he just is. Every other character in that play seems real, by which I mean psychologically plausible, except Iago; a monster is coexisting in this play with real people and we don't question it. So why should there be such tremendous cognitive dissonance about Veda here? (That's the point of the scene with Veda's opera teacher telling Mildred that Veda is like a snake -- how biblical is that?-- and that a person should go see the snake at the zoo, marvel at it, and not try to take it home.)

Which isn't to say that I find Veda wholly plausible or implausible. As is the case with Iago, this is not an either-or proposition. She's simultaneously real and unreal -- a flesh-and-blood symbol. (She's brilliantly played by Wood, who puts flesh and feeling on a somewhat abstract conception.) I have unfortunately known a number of parent-child relationships where one party seems intent on undermining or destroying the other, with such concentrated malevolence that if you saw the situation depicted on film you'd think it was exaggerated. The real-life tormenters don't have Veda's phenomenal, innate talent (that's another subject this "Mildred Pierce" delves into -- the uncanny, inexplicable appearance of genius in a family that has never shown any evidence of it before). But they have her malignant narcissism -- her inability to see other human beings as anything but extensions of herself and means to her end. By which I mean that Veda is a rhetorical device, as my friend said, but she's also a character, one that seems horribly, at times pathetically human. There were a few points in the final two hours where I felt sorry for Veda, because she is obviously a deeply, perhaps chronically unhappy person.

I also felt for Veda in the scene towards the beginning of the fourth hour, where her new teacher (the one who will eventually become her voice coach) quetly and definitively shuts the piano while she's showing what she's got. If you have never considered the difference between talent and genius, Veda's rant might seem unjustified here. But artists feel this level of insecurity all the time, and it is rare to see it articulated with such furious eloquence. Veda is right: every town the size of Glendale has at least one Veda, meaning a young woman or man who seems phenomenally talented to everyone else, but who is really just very, very good, not a genius. That seems like it should be than enough to make a person feel wholly satisfied in life, but it's not enough for Veda, because she knows enough to know what she doesn't know, and it's driving her crazy. (When she discovers that she is a genius -- with her voice, not with the piano keyboard -- it doesn't merely fullfill her, it somehow makes her angrier, crueler, more evil.)

The scene where Mildred discovers that Veda has slept with Monty (Guy Pearce) is one of the most chilling moments I've ever witnessed on television, not because of the act itself, but because of Veda's unrepentant, even coldly delighted reaction to Mildred's distress. It's as if she's fulfilled by Mildred's agonized reaction -- as if it meant more to her than the tryst itself, which of course it did. (The concert scene where Veda sings her mother's favorite song to her seems, in retrospect, like a setup for the moment where Mildred discovers Veda in that bed -- the kiss before the kill.)

Veda loves sticking figurative knives in her mother's gut or back and then twisting them. Some people are like that; they're usually not as talented as Veda, or as much of a self-dramatizing chatterbox, but they do exist. And I think this miniseries has given us a definitive fictional model to measure them against.  This "Mildred Pierce" is about hating someone who loves you (Veda's reaction to Mildred) and loving somone who hates you (Mildred's reaction to Veda). It's a painful thing to experience, and painful to watch, too. But if it's captured with intelligence and empathy, as it is here, it's a lovely and horrifying spectacle, misery transformed into art.