An unlikely player in the war on cowboy poetry

Conservative media are turning a Texas festival into a punchline. But Tea Partier Rick Perry has long been a fan 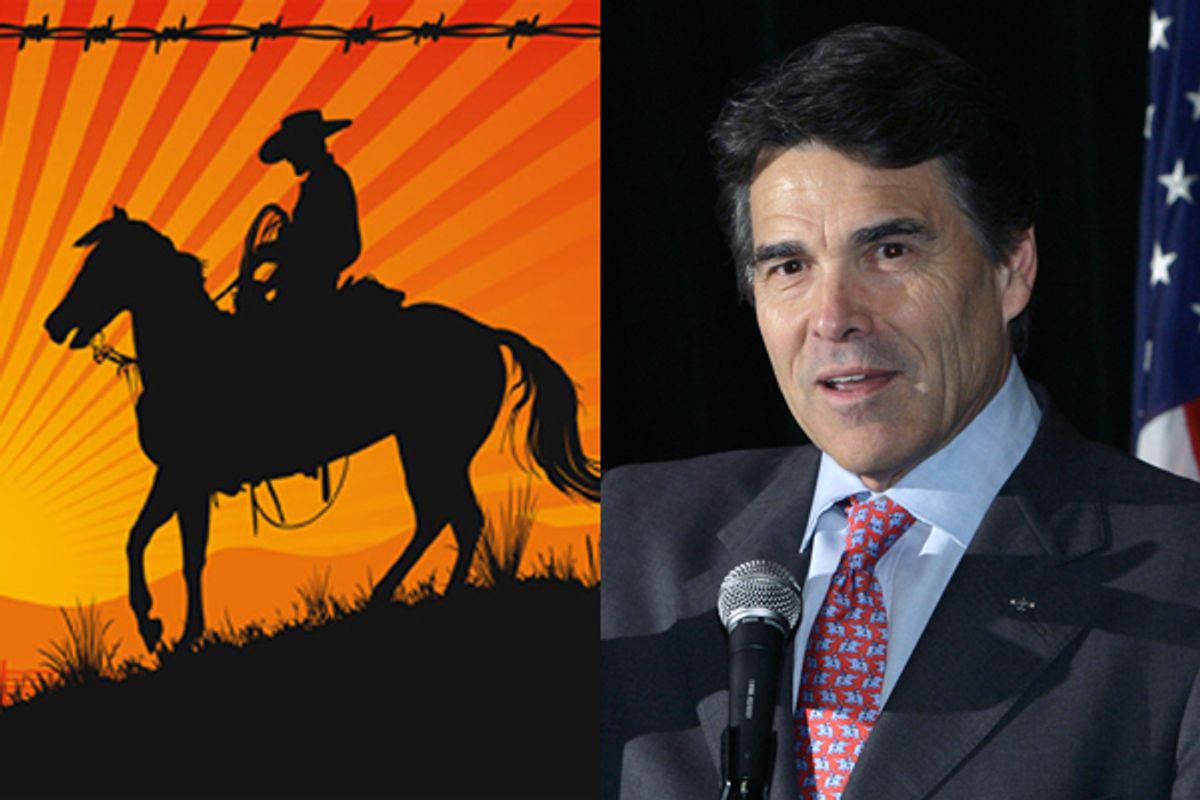 "The National Endowment of the Humanities is the reason we have in northern Nevada every January a cowboy poetry festival. Had that program not been around, the tens of thousands of people who come there every year would not exist."

The media jumped on this quote immediately, turning the phrase "cowboy poetry festival" into a lightening rod phrase during these budget cut debates. And on the surface, it does seem like a ridiculous choice to single out: After all, whoever heard of cowboys being poets? Apparently the only cowboys who are poets are the gay ones, according to how many "Brokeback Mountain" references have been made by conservative blogs like MoonBattery  and Townhall, the latter of which quoted a new parody song by Mark Steyn in their analysis:

An ol’ cowpoke went ridin’ out one dark and windy day

Upon a ridge he rested as he went along his way

When all at once he spied a posse from the GOP

But an ol’ paint can’t outride a trillion-dollar deficit

Even Politico snickered, with a post titled, "Reid: Save Federal Funding for Cowboy Poets!"

But it's Reid who may ultimately have the last laugh. After all, it's not just Nevada who celebrates the poems of the Wild West: Texas has its own Cowboy Poetry Week, which Tea Party governor Rick Perry has given glowing proclamations for since 2006.

Perry, the man who once said:

"Texans…elect folks like me. You know the type, the kind of guy who goes jogging in the morning, packing a Ruger .380 with laser sights and loaded with hollow-point bullets, and shoots a coyote that is threatening his daughter’s dog."

… is the same governor who just last month wrote this missive about his state's own Cowboy Poetry Week:

Through cowboy poetry, we can gain insight into the emotions and thoughts of those who made history and those who continue to live and work in the cowboy culture today. Alternately silly, sardonic and tender, cowboy poetry gives us access to life on the range with all its accompanying excitement, hardships, and dreams.

To emphasize the importance of cowboy poetry to western culture and education campaign being conducted during the week of April. I encourage all Texans to participate and join in celebration. By encouraging a love of history, reading, and storytelling through cowboy poetry, we highlight the best of Texas.

So sneer at Harry Reid all you want, and keep making those "I don't know how to quit you" jokes: You're just proving his point. If cowboy poetry is supposedly so important to Rick Perry -- the definition of a gun-slinging conservative Tea Partier -- then by mocking its existence you're just bring more daylight between John Boehner's Washington Republicans and their own constituents, exposing the true hypocrisy in their leadership with the H.R. 1 bill.

At the time of this article, Governor Perry's office has yet to answer our requests for a statement regarding his stance on the importance of cowboy poetry.