The president who cried wolf on taxes

Obama says it's time to roll back Bush's tax cuts for the wealthy. And we should believe him this time because ...? 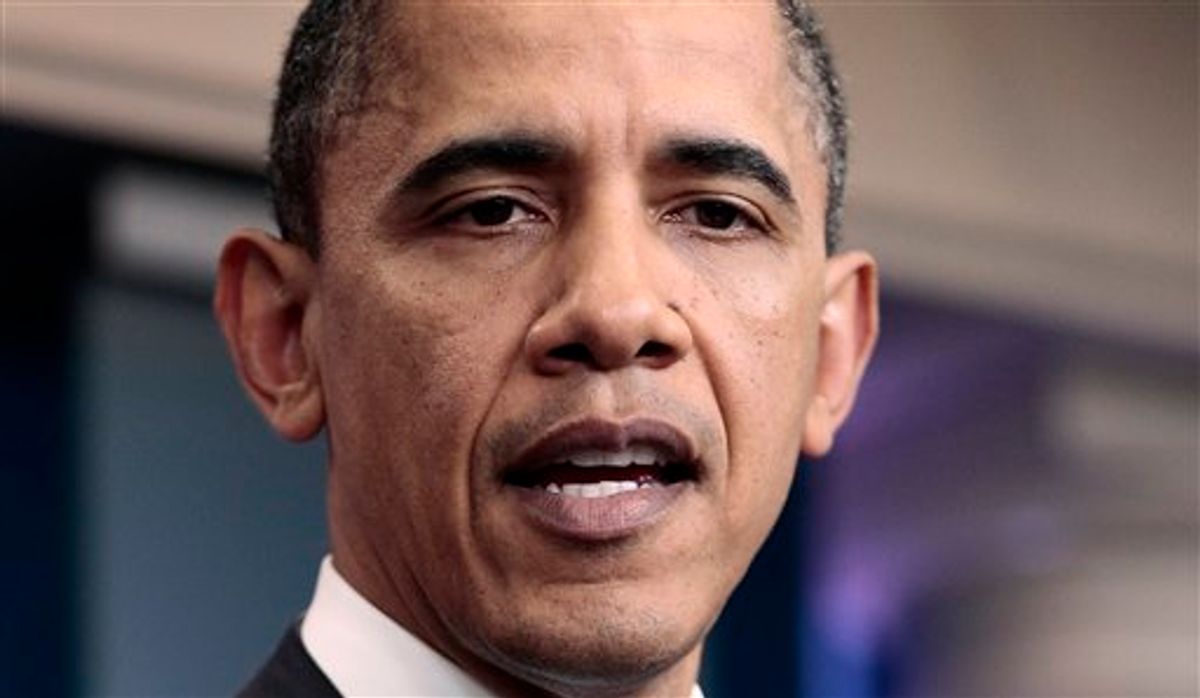 On Sunday's "Meet the Press," senior White House advisor David Plouffe declared that, as part of the president's new deficit reduction plan, to be unveiled later this week, Obama plans to call for ending the Bush tax cuts on Americans who earn more than $250,000 a year.

[The president] has said he believes taxes on the higher income, people over $250,000, should eventually go up. ... I think the president's goal, and he's been clear about this, is to protect the middle class as we move forward here. So people like him, as he'll say, who've been very fortunate in life, have the ability to pay a little bit more. Now, under the Republican Congressional plan, people over $250,000 get over a trillion in tax relief. So this is the important thing, you're making a choice. You're asking seniors and the middle class to pay more. You wouldn't be having to do that if you weren't giving the very, very wealthiest in this country just enormous tax relief.

Stop me if you've heard this before. "Rolling back" the Bush tax cuts on the wealthy was an oft-repeated line in Obama's 2008 campaign stump speech. And as recently as September 2010, Obama gave a speech in Cleveland in which he savaged Republican support for the cuts.

Make no mistake: [Boehner] and his party believe we should also give a permanent tax cut to the wealthiest two percent of Americans. With all the other budgetary pressures we have -- with all the Republicans' talk about wanting to shrink the deficit -- they would have us borrow $700 billion over the next ten years to give a tax cut of about $100,000 to folks who are already millionaires. These are among the only folks who saw their incomes rise when Republicans were in charge. And these are folks who are less likely to spend the money, which is why economists don't think tax breaks for the wealthy would do much to boost the economy.

One midterm election later, and Obama's determination to "roll back" the tax cuts vanished. Now, supposedly, it's back.

Let's set aside the political difficulties inherent in ending the Bush tax cuts for the wealthy when they expire in 2012 -- just after the next presidential election. Given the current climate in Washington, it is extraordinarily difficult to imagine what Obama could offer Republicans to get passage in the House, or 60 votes in the Senate. There's no bend in the GOP on this issue -- indeed, it's difficult to think of any other cause that the Republican Party holds more dear than the holy crusade to keep the tax burden on the richest Americans as low as possible.

But more to the point, why should we believe that Obama means it? Obviously, the White House is aware that taxing the rich is an issue that polls well. So Obama isn't going out on a limb at all when he suggests it. It's a good idea.

But I suspect the public relations value of endorsing higher taxes for the rich has depreciated a fair bit since 2008 and the fall of 2010. If Obama isn't going to put any effort into raising taxes on the wealthiest Americans, why should we pay attention to his rhetoric? Will the president threaten a veto if the next budget deal doesn't include higher taxes for the rich? Will he risk a debt ceiling default by requiring that any "grand bargain" on a deficit-reduction deal tied to a vote to raise the ceiling incorporate a rollback?

Judging by his record so far in his term, the answer to those questions has to be no. The only loophole I can see is the possibility that the economy recovers enough over the next two years that it becomes feasible to build a consensus behind the idea that a tax hike is finally the appropriate, fiscally prudent thing to do. But that's going to take a lot of work, and, dare we say, leadership.