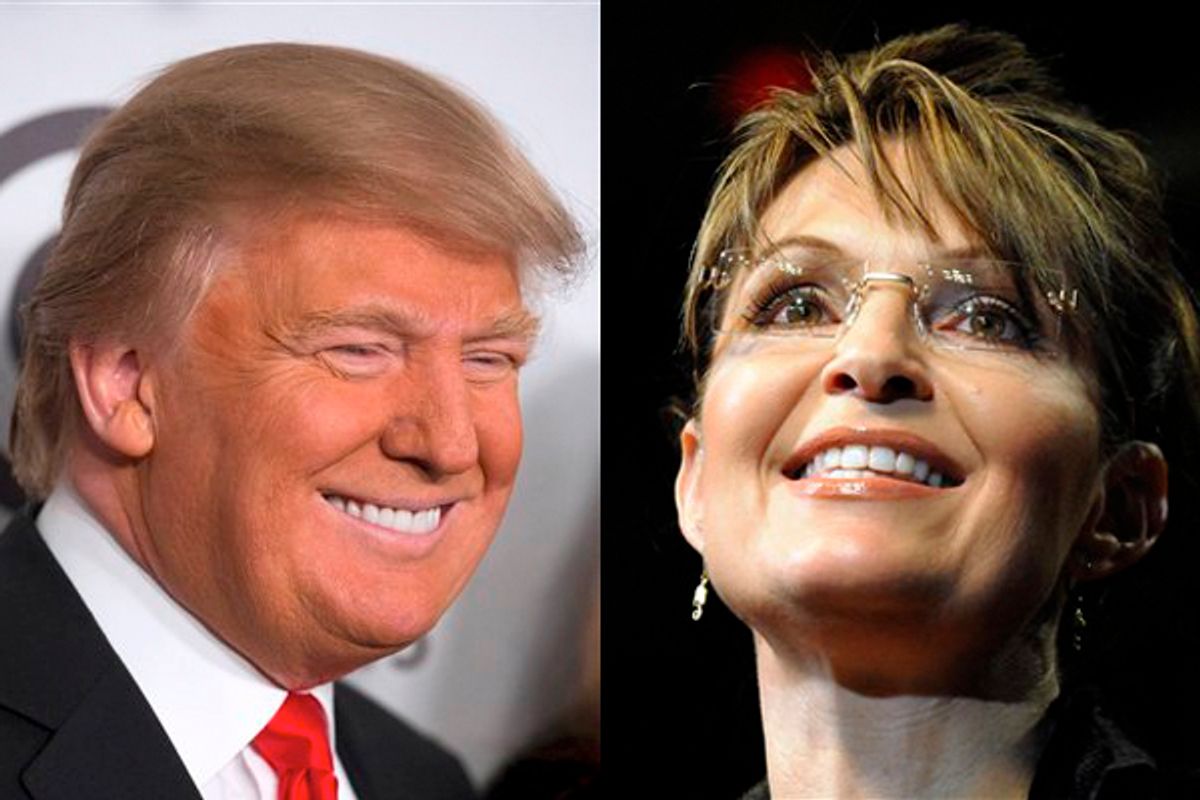 UPDATE 4/13/11: WorldNetDaily's Joseph Farah has now responded to my piece here. My take on Farah and why WND is discredited is here.

One of the latest claims made by Donald Trump -- now joined by Sarah Palin -- is that President Obama has spent $2 million in legal fees to keep his birth certificate secret. Predictably, this figure is based on shoddy reporting by a discredited birther website and lacks any evidence to back it up.

On CNN on Sunday, Trump rolled out the "$2 million" figure as one piece of evidence that Obama was not born in the U.S.

"I just say very simply why doesn't he show his birth certificate?" Trump asked. "Why has he spent over $2 million in legal fees to keep this quiet and to keep this silent?" Sarah Palin used a similar formulation on Fox on Saturday, applauding Trump for investigating "why President Obama would've spent $2 million to not show his birth certificate."

Here's the back story on this particular piece of birther mythology.

While the $2 million figure has now been invoked thousands of times around the Web, it appears to have originated on WorldNetDaily, a right-wing news website that conducts original (and often unreliable) reporting on a variety of conspiracy theories.

I asked Orly Taitz, the leading California-based birther attorney and dentist, where the $2 million figure comes from. "There was an article in WorldNetDaily a while ago," she said. "I believe Trump is correct."

Bill Keller, a Florida evangelical pastor who starred in the first birther infomercial, has also invoked the $2 million figure. I asked Keller his source for the number. "WorldNetDaily has done tons of reporting on this issue," he wrote in an email.

Specifically, WND's Chelsea Schilling wrote a series of articles on the legal bills in 2009. See here, here and here. According to the WND articles, the Obama campaign paid $1.7 million in fees to the law firm Perkins Coie between October 2008 and October 2009.

Perkins Coie's Bob Bauer, who is now White House counsel, represented Obama in at least one birther lawsuit that WND has also written about. In 2009, Bauer fired off a brief letter to an attorney who brought a case questioning Obama's eligibility to be president. Bauer warned the attorney that the case was frivolous and asked him to stop pursuing it. (The case is called Hollister v. Soetoro -- with Soetoro referring to the name President Obama supposedly used as a child in Indonesia. It was recently appealed to the Supreme Court, which turned it down.)

Indeed, just last month Roll Call published a look at the Obama campaign's post-election legal spending -- now totaling $2.8 million, most of it to Perkins Coie. DNC National Press Secretary Hari Sevugan told the paper: "The campaign has incurred ordinary legal expenses related to the wind-down of its operations and other legal services which all campaigns incur and which are proportional to the unprecedented size of this campaign." Roll Call continued:

Sevugan said some legal fees were needed to defend the campaign against "unmeritorious" suits, including one challenging Obama’s citizenship.

So, yes, it's clear that the Obama campaign has spent some money fighting so-called eligibility lawsuits. But the $2 million figure is baseless.

Inquiries seeking comment from Trump and Palin have gone unanswered. But this story shows the fundamental problem with letting Trump on TV again and again to go on his birther rants: Even if you're trying to fact-check him, there are too many layers of falsehoods to do so effectively.