The injustice of economy class

There are so many things wrong that don't need to be wrong. Like those laptop-destroying tray tables 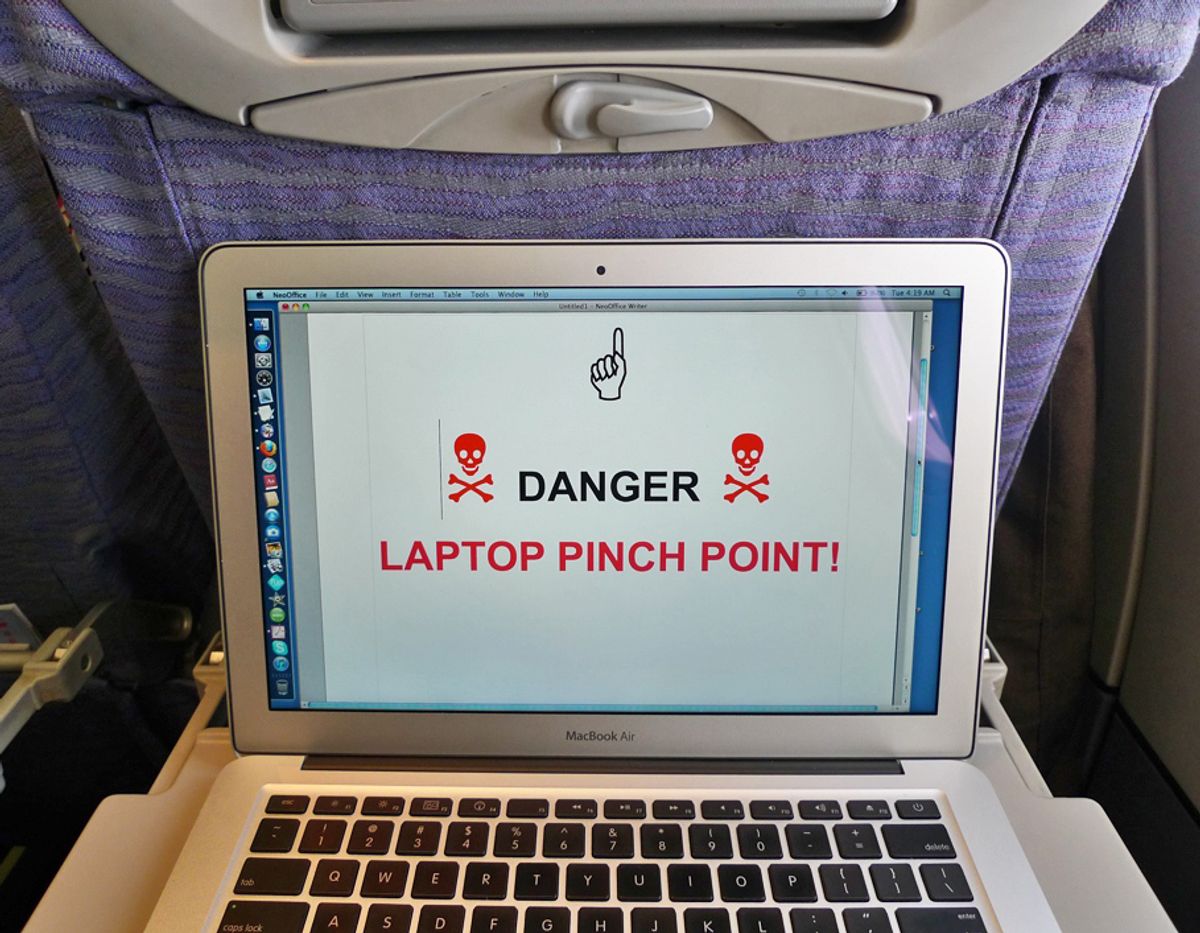 So here I am in Row 46, mulling the injustices of economy class. Allow me to ask a few pointed questions of those who design aircraft seats.

First, would it really be too much trouble to engineer a tray table that is not eager to destroy your laptop computer when the person in front of you reclines? Millions of travelers know what I'm talking about: a pinch point forms as the seat back moves aft, wedging your computer screen between the horizontal tray and the cushion above. If the person reclines fast enough -- "assault recliners" is my name for folks who come hauling back all at once, without consideration for the poor soul behind them -- you've got nary a split-second to rescue your machine from this deadly nutcracker.

It's even more dangerous if your plane has seat-back entertainment screens. The lower edge of the video console juts out an extra half-inch or so from the vertical, reaching even further into your space. On the road I carry an 11-inch MacBook Air, a pretty small computer. Yet to keep the screen clear I need to tip it forward to the point where it becomes hard to see.

Considering the number of people who travel with laptops, and what a great time-killer onboard computing is, you'd think somebody would have addressed this. I know that a seat-back video screen cannot be made paper thin, but its shape or placement could easily be better. An adjustment to the shape and placement of the tray would also help.

As would an inch or two of extra legroom. This is wishful thinking, I know, at least on U.S. carriers, but many foreign airlines offer a touch more space at the knees and thus also are more laptop-friendly.

With or without the extra room, I much prefer the style of tray table that unfolds from the armrest rather than the type that pivots from the seat back. Not only is it safer for computing, but the surface is closer to your lap, making it easier, and less messy, to eat.

Which brings me to issue No. 2:

Is there any viable reason that a tray table cannot be designed with a small lip to keep food and beverages from sliding into your lap during climb? Some trays have recessed cup holders, but most do not. They are smooth and perfectly flat, so that your Chick-fil-A sandwich or hot coffee comes skating backward whenever the plane is nose-high, spilling onto your pants. A quarter-inch ridge along the edge of the tray would prevent this.

One assumes that aircraft interior designers are more or less familiar with the concept of gravity, and would have added this simple tweak. These people do fly, and do test out the products and styles they come up with, right?

Or maybe not. After all, there are so many things wrong with economy class that don't need to be wrong, from tray design to the shape of the seats themselves.

I would like to think this isn't about cost. A tray table is nothing but a piece of plastic molding. I can't imagine that adding an indentation would cost more than a few pennies per seat -- if anything at all. As to those other accouterments, we're talking about a modest upfront expenditure for products that will remain in service for years, providing a more pleasant experience for fliers. Why would an airline say no to that?