Why we should embrace the end of human spaceflight

If God wanted us to live in outer space, we wouldn't have inner ears 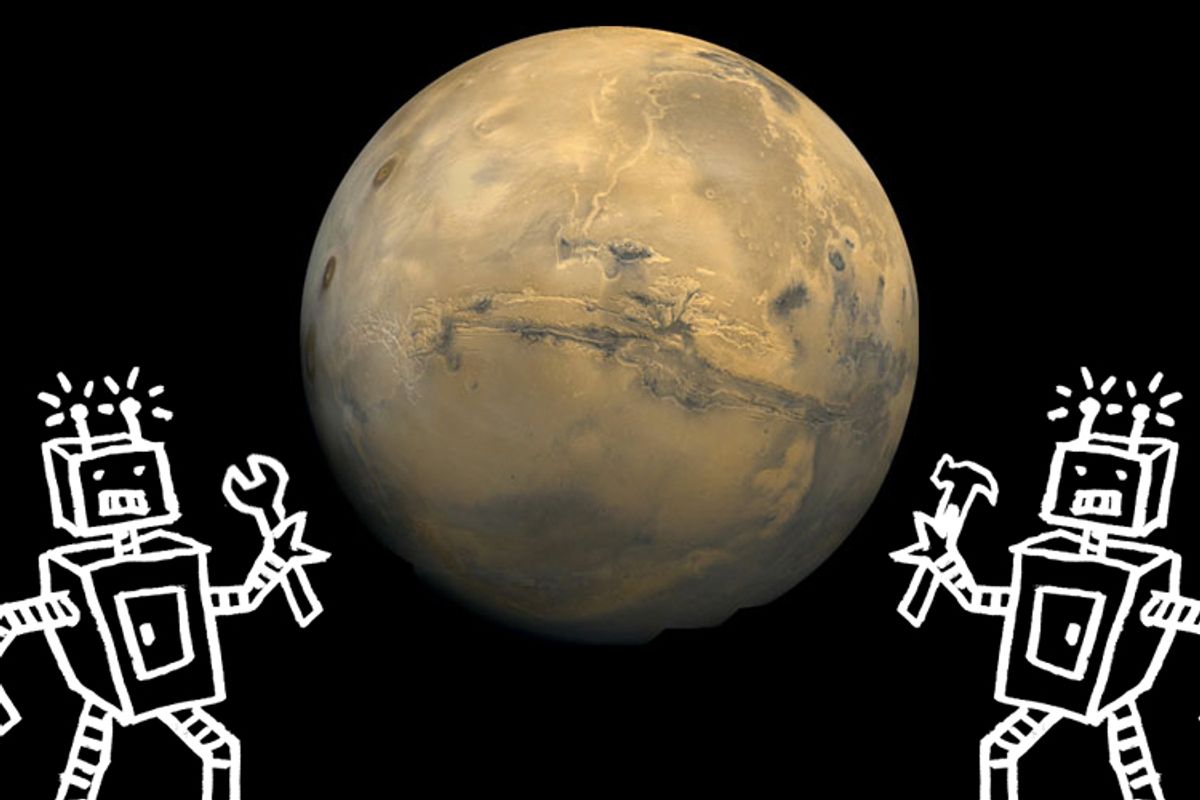 This week NASA is announcing where the soon-to-be-retired space shuttles will be displayed as museum relics. On April 19 the space shuttle Endeavor will be launched, on the penultimate mission of the program. The end of the space shuttle program will mean that the U.S. will have to rely on Russian rockets to deliver American astronauts to space, pending the development of private commercial spaceflight.

It is tempting to say that this is an outrage; that the effective end of the American manned spaceflight program is a national humiliation; that the program's demise is yet another symbol of the gap in mentality between the confident, ambitious Kennedy-Johnson years and today's solipsistic, penny-pinching America. It is tempting to say all that, but the temptation should be resisted.

The truth is that the American space program is flourishing. In recent years Mars has been visited by the Phoenix lander and the Mars rovers, Spirit and Opportunity. At the moment the Messenger probe is orbiting Mercury and the New Horizons probe is scheduled to pass Pluto in 2015. With the help of the orbiting Kepler space telescope, more than 500 planets in other solar systems have been identified. We live in the greatest age of cosmic exploration in history, even if the public pays little attention because there are no astronauts to engage in white-knuckle landings or to clown around for the cameras.

When the Apollo astronauts landed on the moon, many assumed that this was the first step toward permanent colonization of the moon and journeys by astronauts to other planets. From today's perspective, though, the space race was like the races to the North Pole and the South Pole. Once explorers had reached those destinations, the world lost interest.

Another parallel is ocean exploration. Back in the 1960s, visions of colonies on the moon competed with plans for domed cities on the ocean floor that gave a new meaning to the phrase "real estate bubble." Scientific exploration of the ocean depths continues to produce marvelous discoveries, like whole ecosystems that have evolved to take advantage of the heat and emissions of undersea volcanic vents. But the year 2000 came and went and millions of homeowners are "underwater" only in metaphor.

The parallel is not complete, of course. The poles and the ocean depths are far more hospitable to human life than near Earth orbit or the moon or Mars. Astronauts have learned that prolonged weightlessness does terrible things to the bones and the circulatory system. If God wanted us to live in outer space, we wouldn't have balancing systems in our inner ears. When and if the science-fiction alternative of providing a simulacrum of gravity by spinning a spaceship or space station is tried, let us hope there will be a plentiful supply of barf bags.

The worst enemies of human spaceflight are its proponents. Their arguments are so weak that you keep waiting for the real, knock-down argument, which never comes.

The success of robot space probes has discredited the idea that machines are too stupid to do science in space. When that argument for human spaceflight collapses, those that remain are preposterous.

One is the assertion that life has always sought out new environments. Just as plants and animals moved from the seas to the land, it is said, so humanity must transcend the boundaries of the Earth.

This is just silly. Animals never leave a comfortable habitat for a harsh one, unless they are forced to. That is why we don't see buffalo, raccoons and turtles marching off to Death Valley in great numbers to test their mettle, in a spirit of adventure.

Our vertebrate ancestors did not come ashore hundreds of millions of years ago because they decided to boldly go where no fish had gone before. Instead, generations of proto-amphibians in shallow water got stranded in separated ponds. The ones that were accidentally equipped to survive by desperately gulping air survived long enough to breed, and here we and our fellow land animals are. No lungfish congress would have voted to colonize dry land.

Equally silly is the comparison between the exploration of America by Europeans and the exploration of outer space. The Americas had native people to be enslaved by greedy Europeans, abundant resources and lots of pleasant places to live -- to say nothing of breathable air and drinkable water. That's why the European powers fought to control the Western Hemisphere, while ignoring the continent of Antarctica.

What about the argument that part of the human race needs to dwell somewhere other than on Earth, if humanity is to avoid extinction? In 500 million years the gradually warming sun may boil the oceans, and a few billion years later the sun will evolve into a red giant, incinerating or engulfing the Earth. Our descendants, if there are any, might consider relocating.

In the half-billion years until then, the chances of war, plague or global warming producing the total extinction of a species as numerous, widespread and versatile as humanity are pretty low. A sufficiently large asteroid or comet impact like the one that caused the extinction of the dinosaurs could do the job. But if a massive bolide threatened the Earth, we would send unmanned spacecraft, not Robert Duvall or Bruce Willis, to steer it away or destroy it.

In the event some other natural catastrophe -- a supervolcano, a nearby supernova -- rendered the surface of the Earth temporarily or permanently uninhabitable, it would be cheaper and easier to build and maintain underground bunkers than to use the same technology to do the same thing at vastly greater cost on the moon or other planets or in space stations. By the same token, if humanity had the technology to "terraform" the surface of Mars, it would have the power to make the ruined surface of a dead Earth habitable again, making the colonization of Mars unnecessary.

If there is no compelling argument for government-sponsored human spaceflight, there is no convincing rationale for private commercial spaceflight, either. The Robert Heinlein wing of science-fiction fandom has always combined Tea Party-style anti-statism with a love of big rockets. Now that the dead hand of the NASA bureaucracy is out of the way, will visionary billionaires inspired by Ayn Rand inaugurate a new age of commercial space travel for the masses?

Don't count on it. There might be a niche market for a few space-planes or rockets to take bored plutocrats into orbit for a joy ride. But investors would be wiser to invest in private bathyscaphes offering tours of the Mariana Trench. After 9/11, can anyone believe that the world's governments are going to foster a regime of laissez-faire toward private space shuttles that could be hijacked for suicide missions from orbit, or that might disintegrate over several time zones?

And then there is the problem noted by the late William F. Buckley Jr. Because of security precautions, he joked, the increase of speed with each new mode of transport is neutralized by waiting times. A plane is faster than a train or bus, but you have to get to the airport two hours in advance. A spaceplane might take you across the continent in an hour -- but you would have to arrive at the spaceport the day before.

In the next few generations there will probably be more human spaceflight on a small scale. In time there might even be tiny teams of scientists in orbit, on the moon or other planets, like those in Antarctica. But for the foreseeable future space exploration will be undertaken mainly by machines that don't horrify a watching world when they die slowly, with no hope of rescue.

The epitaph for the dream of human travel to outer space might be borrowed from Samuel Johnson's verdict on a natural monument, the Giant's Causeway, in Ireland. It is worth seeing, he said, but it is not worth going to see.