The birthday Mitt Romney wants you to forget

The healthcare law that inspired "ObamaCare" turns 5 on Tuesday. Guess who's trying to change the subject 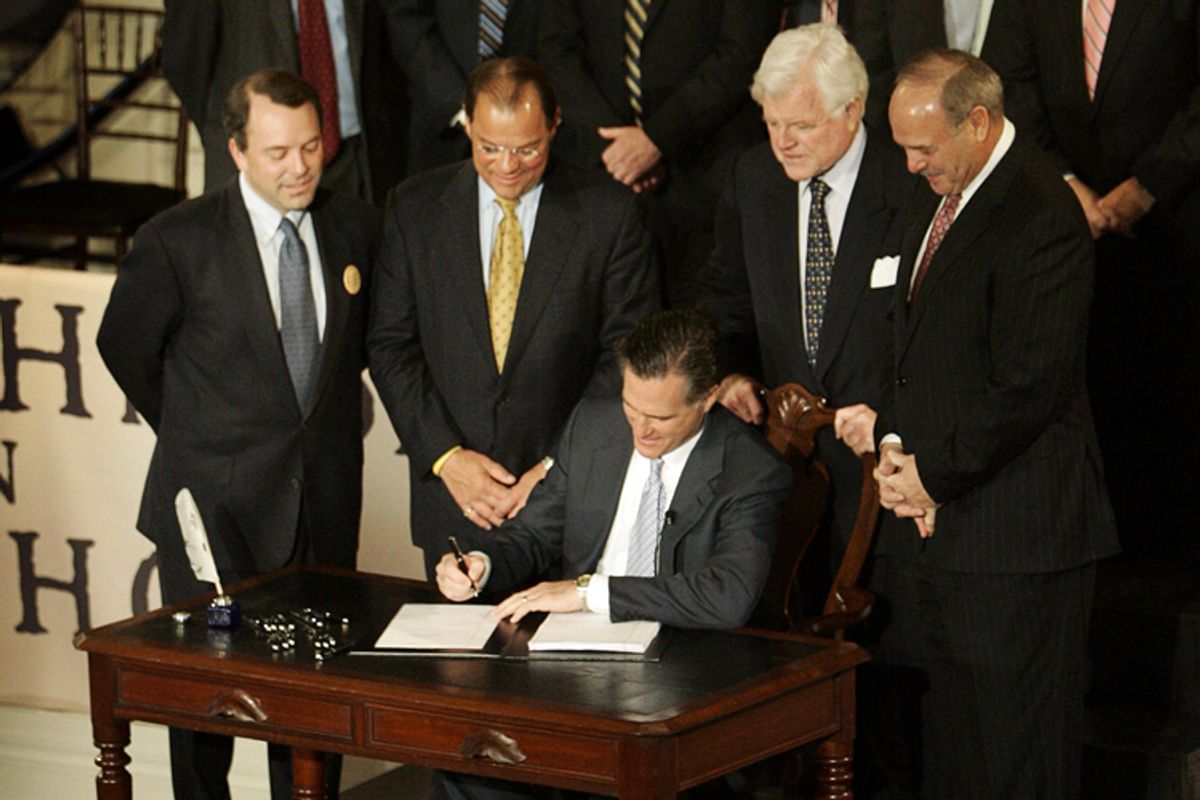 When he signed Massachusetts' universal healthcare law five years ago on Tuesday, Mitt Romney professed to be unconcerned with the potential political implications.

"I have no way of knowing whether it's going to be a help or hindrance down the road," he declared.

This was, of course, total malarkey. From almost exactly the moment the 2004 elections -- in which he'd invested massive time, energy and money in an effort to revive his state's Republican Party and create a more cooperative legislature -- ended in a sweeping defeat for his team, Romney had all but abandoned his day job as governor and dedicated himself to pursuing the 2008 GOP presidential nomination. He was done playing to Bay State voters; it was time to move to the right and to posture for the GOP's national electorate.

You'd never know it today, but the healthcare law -- the one exception to Romney's post-'04 gubernatorial disengagement -- was part of this strategy. The April 12, 2006, signing ceremony at Faneuil Hall was designed to be his national coming out. Here was Romney's moment to lay claim to a Big Achievement that would make him worthy of representing his party on the national stage -- the application of conservative principles to address an enormous social problem.

Well, that was the idea, anyway. As its fifth birthday arrives, the law has become a burden that Romney can't escape, thanks mainly to the individual mandate that's at its heart -- and that President Obama and congressional Democrats then employed in their own healthcare overhaul last year.

Romney has struggled to formulate a coherent explanation for why conservatives who loathe ObamaCare and its freedom-killing provisions should embrace as their next standard-bearer a man who delivered the same program at the statewide level. Democrats, meanwhile, are only too happy to pile on. David Axelrod, Obama's top advisor, recently hailed RomneyCare as "the template" for Obama's program, while Jonathan Gruber, the MIT economist who helped design both plans, said that national reform would never have happened without the Massachusetts example.

So it shouldn't be surprising that, just as mischievous Democrats prepared to throw a party to "thank" him for the law on Tuesday's anniversary, Romney attempted to change the subject, announcing Monday afternoon the formal launch of a presidential exploratory committee.

This doesn't actually mean much, since Romney has essentially been running for president for nearly seven years now. Even when he withdrew from the '08 GOP race, he did it in a manner designed to stir talk of a follow-up bid in '12. Forming an exploratory has some legal ramifications, but it doesn't really change anything: Mitt Romney was running for president before Monday afternoon, and he still is after it. But at least this way, he stands a chance of drowning out the healthcare anniversary commemorations -- or at least showing confidence in the face of them.

That healthcare reform has become such a headache for Romney is rather ironic -- and speaks to how much of the right's opposition to ObamaCare is driven by emotion, rather than reason.

As noted above, when Romney signed the law five years ago, he was in full pander mode. It was the last year of his governorship and, by that point, he was mainly using his office to make symbolic gestures that would appeal to Republicans in key primary and caucus states (deputizing State Police troopers to arrest illegal immigrants, for instance). This was in contrast to the first half of his term, when Romney tried to govern as a reform-minded pragmatist. If the Romney of '06 had any idea how much grief healthcare reform would later cause him, rest assured he wouldn't have gone anywhere near it.

But back in '06, it just didn't seem that risky. Sure, some conservative voices attacked Romney over the mandate, claiming it was an affront to individual liberty. But plenty of others defended him. Romney even brought a representative of the Heritage Foundation to the signing ceremony, giving him a place onstage with Ted Kennedy. Hugh Hewitt proclaimed that "the Romney campaign just took a big step forward."

There simply was no universal consensus on the right five years ago that an individual mandate was a bad thing. Romney made the case that it fostered personal responsibility and called the law practical and "market-based." Republicans in Washington had made this same point a decade earlier, when they built one of their main alternatives to Bill Clinton's reform plan around an individual mandate. To the extent Romney saw any risk of right-wing blowback, it was in the bill's requirement that companies pay a fine of $295 per worker if they failed to offer insurance. Romney vetoed this (and was promptly overridden by the legislature).

What's more, Romney really didn't pay a price for the law in his '08 campaign. His Massachusetts record was certainly a liability in the GOP primaries, but it was his flip-flopping on abortion, gay rights, immigration and the environment that conservative critics tended to focus on -- not the healthcare law. No one seriously suggested that his campaign came up short because of the individual mandate.

It was only in 2009 and 2010, when the right began screaming about Obama's effort to force "socialized medicine" on America, that a consensus on individual mandates emerged on the GOP side. Only then did the right begin demanding an explanation from Romney, something he's been struggling mightily to provide.

It's fashionable to argue that this will end up costing Romney the nomination in 2012, that the GOP base, which never much trusted him in the first place, is eager to build the '12 general election campaign around attacks on ObamaCare and will look for a more credible national spokesman.

But it's also possible that Romney will survive. After all, the right's decision to brand individual mandates a sacrilege was rooted more in a knee-jerk, emotional rejection of Obama than in actual policy concerns. And Romney is now trying hard to connect with that rejectionist spirit; what his healthcare cover story lacks in coherence he makes up for with vicious attacks on ObamaCare and promises to repeal it. In this sense, the same irrational group-think that turned Romney's healthcare law into a political liability three years after it was enacted may end up saving him next year.