But you're way hotter, baby!

Why do couples rate attractive strangers and rank celebrity crushes -- and is it good for the relationship? 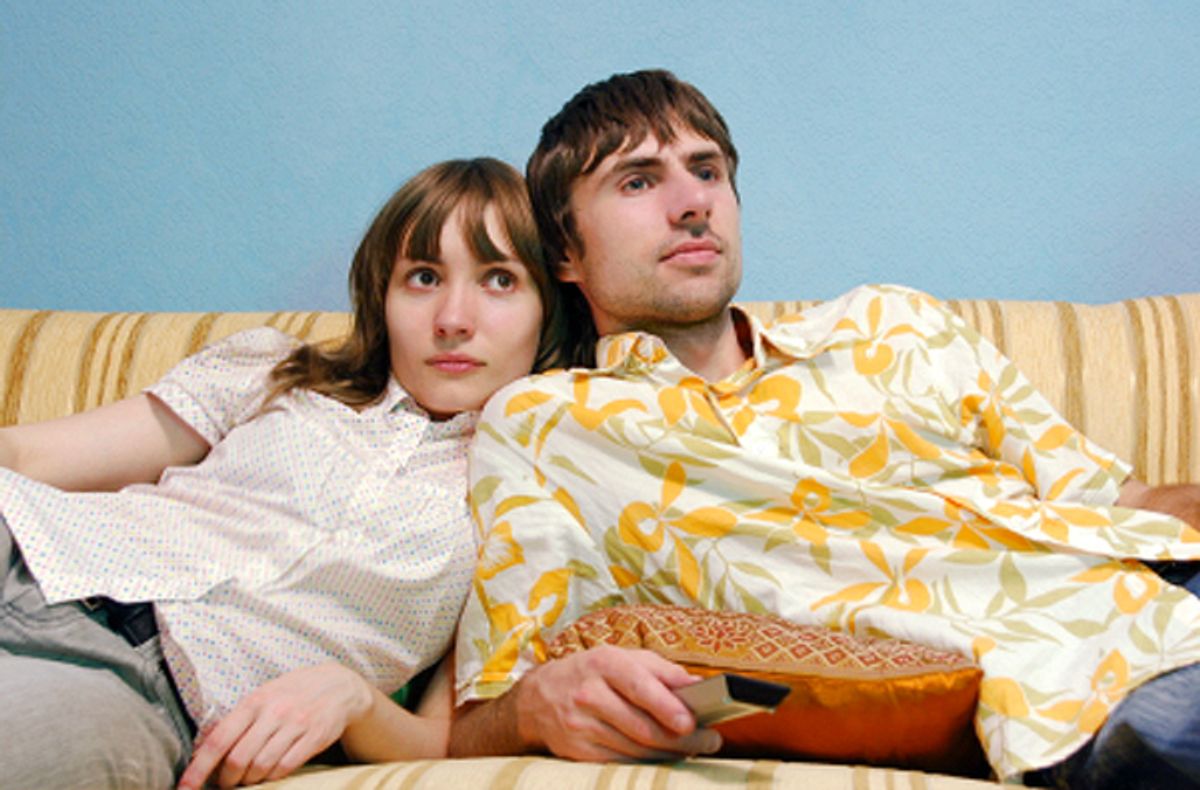 Young couple watching TV together on the couch
--

Couples that ogle together, stay together -- at least that was the message from some readers in response to yesterday's piece, "In Defense of Wandering Eyes." "I encourage it. I join in. 'Ooh, she's just your type,'" one woman wrote. Another said, "If I see him look, I look right along with him. I sometimes even bring them to his attention, as it's me who often notices them." This is an oddly familiar dynamic: I've seen countless couples rate strangers' attractiveness or critically evaluate a particular celebrity's sex appeal -- and yet I haven't heard much about the machinations behind these appraisals. So, inspired by yesterday's comments, I decided to ask people to share their personal experiences and sought out what relationship experts had to say about this odd little dance that couples do.

Julia, 28, tells me that she does this all the time with her boyfriend -- usually "in the context of pretty people on TV." She explains that it "maintains a safe space to be open about being attracted to other people." It's "reassuring to be able to talk about it, in the no-secrets sense of it," she says. Experts say this is a perfectly healthy thing -- for the same reason that letting a partner's eyes wander can actually discourage cheating. Peggy Vaughan, author of "To Have and to Hold," writes, "Attractions become a much greater threat to the relationship whenever acknowledging them is taboo," she says. "If you can't talk about these feelings, they become your own private secret and are likely to grow in intensity and desire."

In "Mating in Captivity," Esther Perel makes a similar argument: "Some couples choose not to ignore the lure of the forbidden. Instead, they subvert its power by inviting it in." This "it" is what she calls "the possibility of the third," the acknowledgment that "our partner has his or her own sexuality, replete with fantasies and desires that aren't necessarily about us." When we "validate one another's freedom within the relationship, we're less inclined to search for it elsewhere," she argues. "It's no longer a shadow but a presence, something to talk about openly, joke about, play with." As one Salon commenter said, "I did not get together with my husband through some delusion on either part that I am the most attractive woman around (or vice-versa)." In fact, Perel argues that the real harm is in buying into the myth that being in a relationship means that you lose your attraction to anyone but your significant other.

Julia says there's also "a bit of a calibration -- what does he find attractive in other people, and how does that relate to me?" She says this sort of self-appraisal is "all a part of figuring out where we all fit in the world" -- and, more important, in our significant other's erotic world. What's the point of a "freebie list" -- as it was dubbed eons ago on "Friends" -- anyway? Tragically, I don't actually expect to get a chance to have sex with Ryan Gosling or The Rock -- but, regardless, I've shared my embarrassing top-two list with boyfriends because it's a way to safely reveal something of my private, lizard-brain fantasies. Talking about personal turn-ons is one of the oldest forms of foreplay in the book -- and getting down to the physical embodiments of those desires can be titillating. That's true even outside of relationships: I had a friendship segue into something more after we started talking to each other about our "types" and even scoping out potential partners for each other.

Joining forces to objectify a sexual competitor -- maybe even unfavorably ranking him or her on a scale of 1 to 10 -- can be a way to defuse the perceived threat to the relationship. Look at us teaming up against that tramp/douche! In the past, I've talked to strippers who have observed this sort of dynamic in couples who visit the club together; the girlfriend or wife enthusiastically comments on the dancers' bodies in a show of how totally and completely unthreatened she is -- she swears! It's empowerment via the whole "female chauvinist pig" thing.

Of course, this can backfire spectacularly. Walker, 28, says he's had some bad experiences with this -- mostly "interrogation" in the form of questions like, "Do you think she's hot?" and "If you weren't with me would you go for that?" Usually, it's been directed at women who have a particular feature that his then-girlfriend was self-conscious about. "My experience is of the person wanting to be hurt and have validation that her insecurities are real and true when in fact they are not."

Megan says this sort of interaction with her boyfriend started as "an innocent game we would play, a flirtatious way to interact, a kind of getting-to-know-you type thing." But now, several years into the relationship, she says, "I ask about women to see his taste, to see if I fit into what he vibes. I usually ask because it ends up hurting me in some way. I'm a masochist, I suppose." Then there's the flip side of that: When talking about attractive strangers is a way to intentionally invoke a partner's jealousy or make them feel inadequate.

The short of it is that checking out other people with your special person can get you hot -- to trot, or under the collar. It's just as with the study I wrote about yesterday: Letting a partner's eyes wander can be good for the relationship; only, if a partner's eyes are always wandering, it's a bad sign. Relationships are complicated; people are different. If you were looking for the fail-proof secret to a happy relationship, prepare to be disappointed -- not only in this article, but also in life. (Cue: Sad trombone.)