Why Bachmann is a useful tool for the Republican establishment 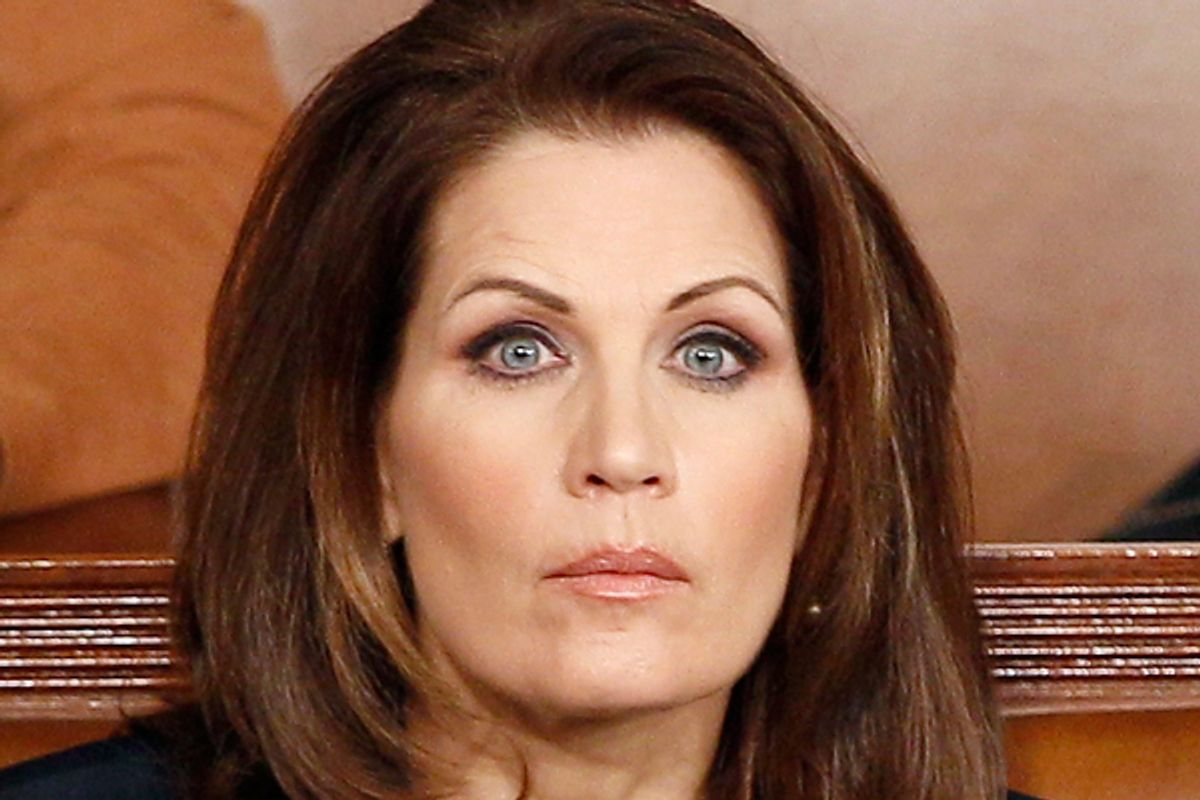 I wrote Monday about the steady, quiet decline of Sarah Palin as a credible candidate for the 2012 Republican presidential nomination. The evidence: new polling that puts her popularity -- and her standing among other '12 prospects -- at an all-time low, this coming several months after prominent conservative commentators began raising doubts about Palin's electability and political judgment.

Even more data is out today, this time in a survey from CNN, and once again it shows Palin stuck in the middle of the GOP pack, with 12 percent.

The spin, if you're a Palin devotee, is that the CNN poll -- and most of the other recent surveys -- is skewed because it includes Donald Trump, who is almost certainly not running (and who is tied for first place with 19 percent).  It also includes Mike Huckabee, who has seemed an increasingly unlikely candidate (although he is now apparently talking to potential fundraisers). So maybe Palin's support will return to the high teens/low 20s, where it was until the last few months, if and when Trump and Huckabee leave the stage.

I suspect that it won't be this easy for Palin, though.

For one thing, as I noted Monday, it seems that much of the conservative establishment that made excuses for Palin for her first two years on the national stage woke up after last November's midterms, when Palin-ish candidates cost the GOP several winnable statewide races. Realizing that Palin could do the same to the national party in 2012, they began criticizing her in ways that had previously been unthinkable. And when Palin was condemned for her response to the Gabrielle Giffords shooting, many on the right joined the pile-on. Even if Trump and Huckabee fade from the scene, this dynamic figures to endure.

And there's another problem for Palin: Michele Bachmann. The Minnesota congresswoman appeals to the same subset of conservative, Tea Party-friendly Republican voters as Palin -- and while Palin has faded somewhat from view recently, Bachmann has sent strong signals that she's serious about seeking the GOP White House nod. In today's CNN poll, Bachmann sits at 5 percent; in an NBC/Wall Street Journal survey released last week, she was at 6 percent. She's also raised some serious money: more than $2 million for her PAC and for her House campaign committee in the first three months of this year (this after raising an astounding $13 million for her House reelection bid in 2008).  Bachmann is not the international celebrity that Palin is, but within the conservative activist community, she's a rock star.

All of this, ironically enough, makes her very useful to the Palin-phobic Republican establishment. No, they don't think that Bachmann has some magic November formula that Palin lacks. Give them truth serum, and rest assured that most bottom line-oriented Republicans will admit that Bachmann would be general election poison for their party in a national election. (In fact, some of them don't even require truth serum; note the dismissive attitude toward a Bachmann run exhibited by California Rep. David Dreier in a recent Politico interview.)

But that's the beauty of a Bachmann candidacy: Nobody seriously believes she has a chance to win the GOP nomination. The establishment has seen candidacies like hers before, fringe ideologues with devoted followings -- and clear ceilings on their support. The best-case scenario for Bachmann is that she somehow tops a splintered field in Iowa's caucuses (where cultural conservatives hold disproportionate sway). But even then, the rest of the party would quickly rally around her most broadly acceptable (and viable) opponent. The obvious parallel is to 1996, when Pat Buchanan won the New Hampshire primary with 29 percent of the vote -- then watched the other 71 percent of the party flock to Bob Dole in panic. Thus, the GOP establishment has high confidence that it can contain a Bachmann candidacy, if need be.

What Bachmann can do, though, is steal attention, money and votes from Palin -- potentially closing down whatever remaining victory scenario exists for the Alaskan. It's unclear from the recent polling exactly where Bachmann's support is coming from, but if you add her totals to Palin's, Palin's support would be back in the high teens, closer to where it was throughout 2009 and 2010. Plus, if Huckabee declines to run, a fair number of his supporters will likely be tempted by Bachmann. If Bachmann ramps up her activity and launches a full-blown candidacy, it could give Palin pause; her numbers are already plummeting -- would she really want to enter if Bachmann is threatening to eat into her base (and maybe, in the end, eclipse her as the national face of female conservatism)? Alternately, Palin could plow ahead and run anyway, in which case Bachmann (assuming she stayed in the race) would serve as a drain on her support.

Either way, Bachmann's presence is a net plus for establishment Republicans. She's one more insurance policy against a Palin nomination -- and there's really no chance that she'll somehow win the nomination herself.

(For what it's worth, I appeared on MSNBC Tuesday morning to talk about Palin's declining '12 prospects. The video is below.)