Supposedly, the president is permanently alienating the voters who were most crucial to his '08 success 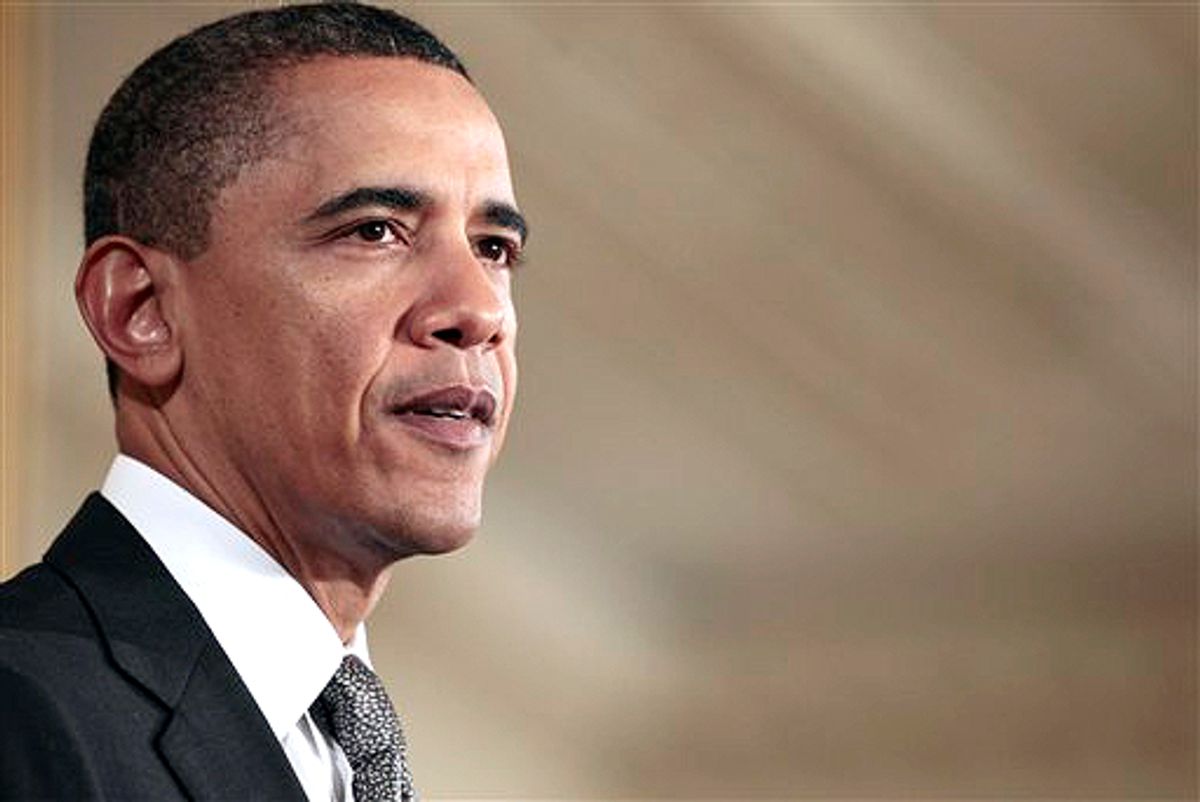 Here we go again. A few days after he agreed to a compromise with Republican leaders to keep the government open -- and just as he's about to deliver a major speech on his long-term deficit reduction priorities -- President Obama is being confronted with warnings that he's at risk of losing his left-of-center political base.

The Washington Post reports today on the "growing rebellion on the left" that has greeted Obama's embrace of rhetoric and pursuit of policies designed to curry favor with swing voters. The Hill writes that Obama "risks leaving liberals at home in the fall of 2012." As I write this, Obama has yet to begin his deficit reduction speech, but it's very possible that the liberal commentators who have been excoriating him for the past week won't change their minds as a result of it. In other words, expect more of these stories in the coming days.

This ought to feel familiar. Time and again during Obama's 27 months in office, we've witnessed eruptions like this, with one-time Obama supporters claiming that because of [insert Obama action here], the president has lost their support for good. Remember when Keith Olbermann forecast a serious primary challenge to Obama if he allowed the public option to be killed during healthcare negotiations? Or when the liberal commentariat reacted with rage -- and in many cases swore vengeance -- after Obama agreed to a two-year extension of the Bush tax cuts last December? (The president, Frank Rich wrote at the time, is "so indistinct no one across the entire political spectrum knows who he is.") Or when Rachel Maddow excoriated Obama for "kicking his base in the teeth" by backing off plans for civilian trials for Guantanamo detainees?

All of these episodes -- and others like them -- have one thing in common: For all of the threats and dire forecasts, Obama's base stuck with him. At the same time that he was agreeing to extend the Bush tax cuts, his approval rating among Democrats held steady, in the 80 percent range, where they'd been throughout 2010 -- and his highest scores were among self-identified liberals. And nothing much has changed since then, even after Guantanamo, and even after several months of "triangulating" (if that's what you want to call Obama's post-midterm posture); Gallup's latest poll has Obama's approval among Democrats at 80 percent. An NBC/Wall Street Journal survey released last week put it at 83 percent -- with a score of 79 percent among liberals. We have heard expressions of outrage from left-of-center commentators about how Obama has sold out his old base -- but that base, by all appearance, remains very much intact.

Part of the explanation for this can be found in a piece by Adam Serwer, who notes that liberals do not have the kind of efficient and influential "media ecosystem" that conservatives do. Rush and Hannity and the Fox News crowd are far more able to impose group-think on the right than Maddow, Olbermann and Ed Schultz are on the left. It also matters, as NBC's First Read noted the other day, that so many more Americans describe themselves as conservatives.

Glenn Greenwald argues that the problem is reflexive partisan loyalty: When Obama makes a decision, Democrats rally around it simply because he is their leader, even if that decision violates their own values (or runs counter to the platform Obama campaigned on in 2008). This, Greenwald notes, could explain a disconnect like the one that emerged during the tax cuts debate in December: The same polls that showed Democrats overwhelmingly opposed to extending the Bush rates also showed Democrats overwhelmingly approving of Obama's decision to extend them.

There's something to this, but I suspect it's too literal an interpretation. I doubt that most casual Democratic voters have the same passion about and understanding of most of the issues that Obama has supposedly sold them out on. Poll results on individual policy issues tend to be extremely misleading. Most voters simply don't follow policy debates nearly as closely as political commentators do. Their feelings are often ill-formed and malleable. When presented with an isolated policy question, they're prone to give one response, only to reverse themselves when given more information. Thus, we now see polls that show voters overwhelmingly opposed to raising the debt ceiling. Why? Because they instinctively view debt as a bad thing. Why would we ever want to raise the ceiling on it? But then ask them if they'd hold the same opinion if it meant slashing Medicare and their answers change.

The same can be applied to reactions to Obama's policy choices. Just because Democrats instinctively tell pollsters that they want taxes hiked on the rich or that they want Guantanamo closed doesn't mean they hold those views with the same intensity as commentators who live and breathe these issues for a living. What they do feel strongly about is a more basic and personal question: Do they like President Obama? The answer to this, when it comes to the Democratic base, has and continues to be an overwhelming "yes."