Why are Christian movies so awful?

As "Soul Surfer" demonstrates, "faith-based" movies are a boom industry. Do they have to be so lame? 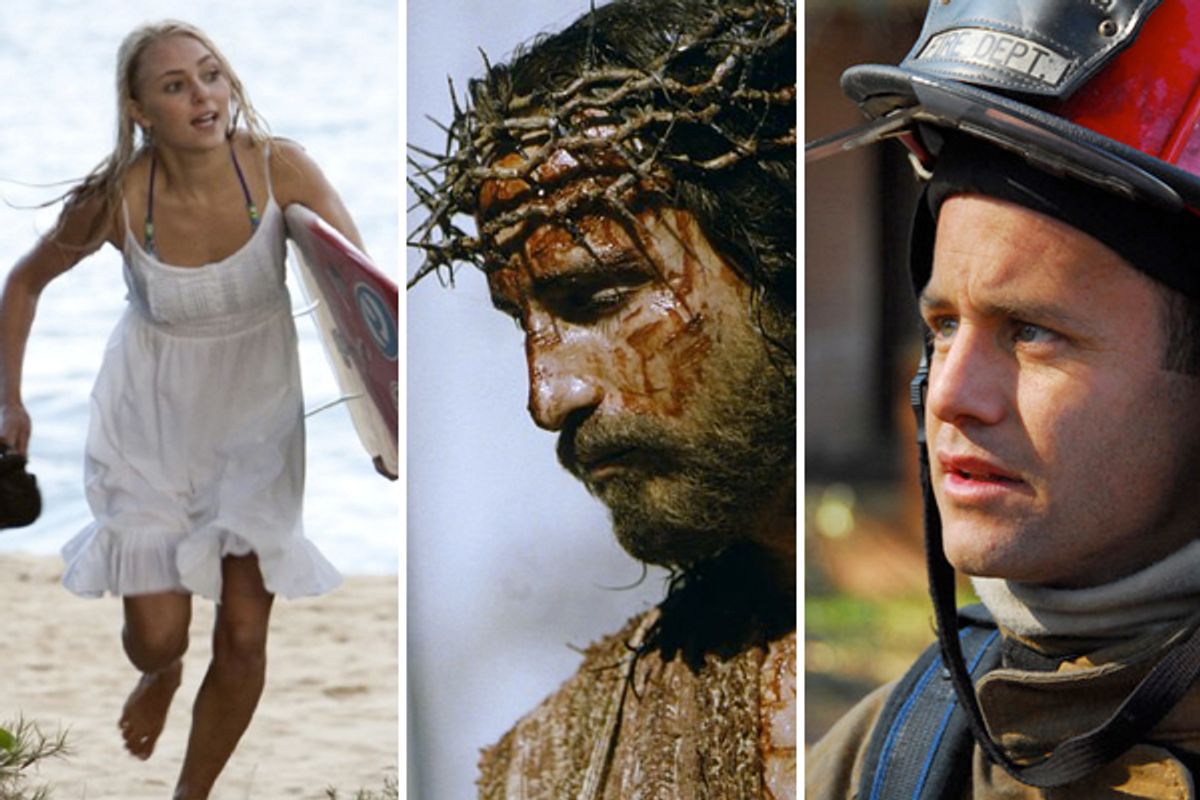 When a star teenage surfer named Bethany Hamilton lost her left arm in a 2003 shark attack, and then got back on her surfboard just three weeks later, you could hear another species of shark -- the ones from Hollywood, who turn dramatic real-life events into movies -- swimming to the scene. Not only did Hamilton's story have an attractive and charismatic central character, it also came with a moral message attached and (to think more cynically) a much-desired target demographic. Hamilton's family were evangelical Christians who understood what had happened to Bethany as a personal and providential test of faith, and also saw it as an opportunity to testify to the wider world.

The resulting film, "Soul Surfer," which stars AnnaSophia Robb as Hamilton and Dennis Quaid and Helen Hunt as her parents, took some interesting twists and turns on its way to the big screen. There was evidently disagreement between the Hamiltons and the film's producers along the way, over the question of how explicit to make the references to faith and the quotations from Scripture. (They're plenty explicit, if you ask me.) But success has a way of resolving all such disputes, and "Soul Surfer" opened last weekend on 2,214 screens with a $10.6 million gross, and the third-highest per-screen average of any film in wide release (after "Hop" and "Hanna").

You could call "Soul Surfer" a Christian film that got picked up by a mainstream distributor (Sony) or an inspirational mainstream film that was concocted with the "faith-based" audience partly or largely in view, after the fashion of "The Blind Side," "Secretariat," the "Chronicles of Narnia" series and so on. (For whatever it's worth, the universe of Christian movie sites and bloggers seem to view it as the former.) While the Hamilton family's religion runs through the story as an undercurrent, the movie's only mouthpiece for official Christian theology is a youth counselor played (very clumsily) by country star Carrie Underwood. As Carolyn Arends, the film critic for the evangelical site Christianity Today, has noted, director Sean McNamara and his team of writers aren't trying to preach the gospel to outsiders but to create a recognizable self-portrait for their target audience, "a reasonable approximation of daily American Christianity."

However you want to categorize "Soul Surfer," it's going to make plenty of money, and should serve to remind those of us in the secular moviegoing public that the evangelical audience that emerged with Mel Gibson's "Passion of the Christ" and the out-of-nowhere 2008 hit "Fireproof" hasn't gone anywhere. Christian-identified viewers remain voraciously hungry for content, and even though the major studios all have marketing arms devoted to courting them, they still feel poorly served by the mainstream film industry and its addiction to violent, sexual and otherwise profane subject matter. (Dozens of Christian-oriented movies are made every year, but only a small fraction of them will reach general release.)

But do Christian-themed movies really have to be so bad? I won't even pretend that "Soul Surfer" is the worst film I'll see this month, since it lacks the overarching, high-concept horribleness of something like "Your Highness." But it's a trite, sentimental puddle of sub-Hollywood mush, with mediocre photography, weak special effects and an utterly formulaic script that somehow required seven (!) credited writers. Believe me, I have learned, over and over again, that ordinary moviegoers, a lot of the time, want to see a story that's positive, predictable and not all that challenging, but even measured on that yardstick this one is pretty awful. Even Arends of Christianity Today, who is eager to praise the film but too principled to be dishonest, admits that the writers offer up "some not-quite satisfying resolutions about God's plans in the face of tragedy." Robb and Quaid are OK, after the fashion of TV-drama acting, but Helen Hunt is severely miscast as Bethany's worrywart mom and Carrie Underwood is embarrassingly weak.

If evangelical Christians want to see their life and faith and values reflected on-screen, I guess that's understandable. But movies are not mirrors, and the mass audiences that went to see "The King's Speech" or "Black Swan" or "The Social Network" didn't necessarily identify with the characters or their lifestyles. Although the prehistory of Christian cinema goes back several decades -- the Campus Crusade for Christ film "Jesus" played mainstream theaters in 1979 -- with the solitary exception of Gibson's gruesome and visionary "Passion of the Christ" the genre hasn't evolved past the most tedious stage of message-delivery and representational politics. (Insert joke here about Christians and evolution.) At the risk of offending many people in many different directions, Christian cinema reminds me of gay cinema. If, that is, gay cinema were permanently stuck in 1986, with a self-ghettoizing mandate to present positive role models for youth and tell an anodyne but uplifting story that sends a message of hope.

On the face of it, this is a curious turn of events. Whatever you want to say about Christianity as a system of thought or a force in history, you'll have to admit that it has a pretty impressive record as a source of inspiration for artists and writers. But when we use the buzzword "Christian" in contemporary American society, we're talking about a distinctively modern cultural and demographic phenomenon that has almost no connection to the spiritual and intellectual tradition that fueled Dante and Milton and Leonardo and Bach. Furthermore, American evangelical Christians, concentrated in the heartland and the South, have felt a certain level of antipathy toward the film industry since its birth. They have long viewed Hollywood (not without justification) as a Jewish-dominated metropolitan enterprise that was fundamentally secular and indeed almost Nietzschean in its worship of bigness and money and power.

Marketers in Hollywood have been aware of this all along, and throughout movie history we see overt efforts to reach out to America's majority religion, as in "The Ten Commandments" or "The Greatest Story Ever Told." From the 1930s through the mid-'60s, the studios also generated handsome returns on "family films," light comedies or inspirational dramas that usually had no religious content but also no violence or risqué humor, and were meant to be equally inoffensive to all. Mind you, it's impossible to generalize about those movies: Some are unwatchable and cloying, like the Shirley Temple musicals my mother remembers being dragged to, while others (like Frank Capra's best movies) are masterpieces of a certain overcooked variety.

But American cinema and the Hollywood system and the rest of our society were turned upside down in the '60s and '70s, and the rise of the Christian-oriented film industry, like so many other things in our cultural life, is an aftershock from that earthquake. It's only oversimplifying a little to say that pop culture went in one direction and the evangelical population went in another, and despite a long process of reconciliation, it's still not clear that they speak the same language. If I really had any faith in American pluralism and in my fellow human beings, I guess I would predict that someday soon Christian filmmakers will ramp up their craft and make much better movies than "Soul Surfer." Does the Lord really want to be glorified by way of something that looks like an especially tame episode of "Baywatch"?