That's what it means to be a Democrat 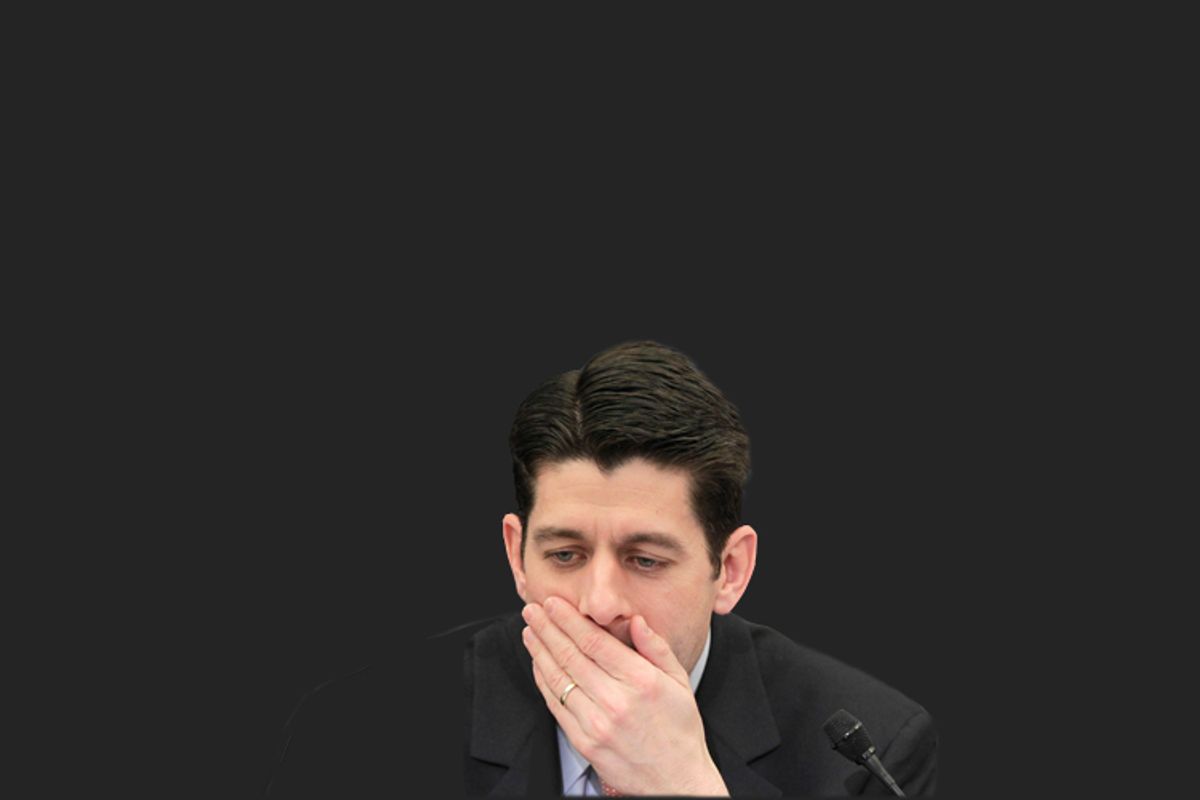 I'm glad I waited for President Obama's heralded budget speech Wednesday before criticizing it (such a novel idea); there was much to praise in it and little to challenge. The best news: Obama laid out the kind of sweeping "story" of American democracy, and the bold vision of how we grow together, that I thought was too much to ask for even yesterday. He even talked about the scariest fact of American inequality: The dangerous hold the top 1 percent of Americans has on wealth, income and (he didn't say this) politics. He pushed back on the cruel GOP deficit plan, made his toughest case yet for tax hikes on the richest, and stayed away from the worst ideas floated by his own deficit commission. The devil will be in the deficit-cutting details, and frankly, there weren't a whole lot of them in the speech. But the president came out fighting with firmness, and with a rhetoric of social justice and equality, that I haven't seen enough of these last two years.

Obama acknowledged our American history as "rugged individualists, a self-reliant people with a healthy skepticism of too much government." But he quickly identified "another thread running throughout our history":

A belief that we are all connected; and that there are some things we can only do together, as a nation. We believe, in the words of our first Republican president, Abraham Lincoln, that through government, we should do together what we cannot do as well for ourselves. And so we’ve built a strong military to keep us secure, and public schools and universities to educate our citizens. We’ve laid down railroads and highways to facilitate travel and commerce. We’ve supported the work of scientists and researchers whose discoveries have saved lives, unleashed repeated technological revolutions, and led to countless new jobs and entire industries. Each of us has benefited from these investments, and we are a more prosperous country as a result.

Part of this American belief that we are all connected also expresses itself in a conviction that each one of us deserves some basic measure of security. We recognize that no matter how responsibly we live our lives, hard times or bad luck, a crippling illness or a layoff, may strike any one of us. "There but for the grace of God go I," we say to ourselves, and so we contribute to programs like Medicare and Social Security, which guarantee us health care and a measure of basic income after a lifetime of hard work; unemployment insurance, which protects us against unexpected job loss; and Medicaid, which provides care for millions of seniors in nursing homes, poor children, and those with disabilities. We are a better country because of these commitments. I’ll go further – we would not be a great country without those commitments.

So far, so good. It got even better when Obama took direct aim at Paul Ryan's cruel and ludicrous budget plan. He laid out its many cuts, and concluded:

These are the kind of cuts that tell us we can’t afford the America we believe in. And they paint a vision of our future that’s deeply pessimistic. It’s a vision that says if our roads crumble and our bridges collapse, we can’t afford to fix them. If there are bright young Americans who have the drive and the will but not the money to go to college, we can’t afford to send them. Go to China and you’ll see businesses opening research labs and solar facilities. South Korean children are outpacing our kids in math and science. Brazil is investing billions in new infrastructure and can run half their cars not on high-priced gasoline, but biofuels. And yet, we are presented with a vision that says the United States of America – the greatest nation on Earth – can’t afford any of this.

Then he attacked the Gilded Age social inequality and tax cuts that have helped create our troubles:

Think about it. In the last decade, the average income of the bottom 90% of all working Americans actually declined. The top 1% saw their income rise by an average of more than a quarter of a million dollars each. And that’s who needs to pay less taxes? They want to give people like me a two hundred thousand dollar tax cut that’s paid for by asking thirty three seniors to each pay six thousand dollars more in health costs? That’s not right, and it’s not going to happen as long as I’m President.

Indulge me here, because this is how Democrats should be talking, and rarely do:

The America I know is generous and compassionate; a land of opportunity and optimism. We take responsibility for ourselves and each other; for the country we want and the future we share. We are the nation that built a railroad across a continent and brought light to communities shrouded in darkness. We sent a generation to college on the GI bill and saved millions of seniors from poverty with Social Security and Medicare. We have led the world in scientific research and technological breakthroughs that have transformed millions of lives.

This is who we are. This is the America I know. We don’t have to choose between a future of spiraling debt and one where we forfeit investments in our people and our country. To meet our fiscal challenge, we will need to make reforms. We will all need to make sacrifices. But we do not have to sacrifice the America we believe in. And as long as I’m President, we won’t.

That's the president I voted for.

On the meat of the president's plan to cut the deficit: He deserves credit for rejecting Medicare vouchers, for turning aside specific talk about Social Security (even though it has nothing to do with the federal deficit, the privatizers and Obama's friends on his deficit commission wanted it thrown on the table in a grand bargain that can only be bad news for Democrats and working people; Obama seemed not to be willing to do that); for promising that reforms and innovations already part of the Affordable Care Act will bring down the costs of Medicare and Medicaid; and for saying we need bigger defense cuts than so far proposed.

(Small point: I liked the way Obama trashed Ryan without mentioning him -- you don't fight down -- but I wish he'd been a tiny bit more confrontational on exactly what Ryan's "Medicare vouchers" would do; if seniors could afford insurance at all, which is debatable, they'd certainly be at the mercy of privatized "death panels" refusing care over its costs. I say that because I'm sure some GOP prevaricator will bring back the "death panel" lie now that Obama has committed to curbing costs in Medicare. I hope I'm wrong.)

My quibbles? I'm still concerned that Obama has agreed to freeze the 12 percent of the budget that goes to "discretionary spending." And I'm assuming that freeze includes the cuts made this week. I don't like his promise of $3 in spending cuts for every dollar raised in revenue via tax hikes. In a statement, AFL-CIO president Richard Trumka praised the speech but added: "President Obama does not yet have the balance right between spending cuts and new revenue." I also never like it when Obama undermines himself by saying things like:

I don’t expect the details in any final agreement to look exactly like the approach I laid out today. I’m eager to hear other ideas from all ends of the political spectrum.

I know, I know, he thinks it makes him sound reasonable to independents; I worry he sounds weak to Republicans. If Obama thinks the plan he laid out is as far to the left as Ryan's plan is to the right, and that the answer is to meet in the glorious middle, we're all in trouble.

But for today, I'll take him at his word. After the speech, pundits called it the opening salvo of the Obama 2012 reelection campaign, as though there was something wrong with that. If these are the founding principles of the president's 2012 campaign, Democrats and the country will be better off than we've been in a while.