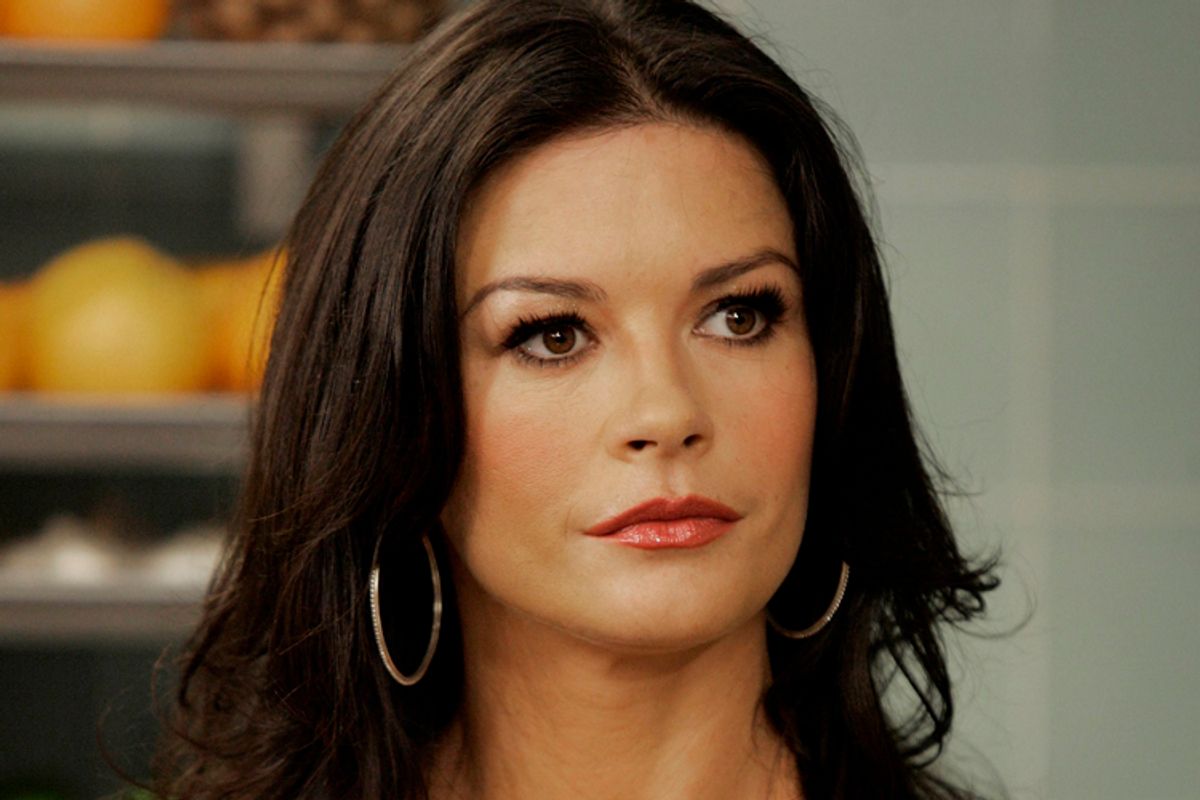 The numerous side effects of a serious cancer diagnosis can include overwhelming stress and intense emotional problems. For your loved ones.

On Wednesday, reps for Oscar winner Catherine Zeta-Jones sent out a statement that "after dealing with the stress of the past year," she "made the decision to check into a mental health facility for a brief stay to treat her bipolar II disorder." The busy actress and mother of two has indeed had a wingding of a time lately. In 2010, her stepson Cameron Douglas was sentenced to five years in prison for possession of heroin and dealing meth and cocaine. Just a few months later, her husband, Michael Douglas, was diagnosed with Stage 4 throat cancer, and had to undergo chemotherapy and radiation.

Zeta-Jones' disorder is likely not news to her; she's probably been working to manage her condition for some time. She once told the UK Sunday Times, "I try and stay positive, being negative isn't good for my personality. I don't just bring myself down, I bring everyone around me down. It's like a dark cloud, 'Uh oh, here we go', and I have to snap out of it." But a severe illness in the family isn't so easily snapped out of. And for a person with bipolar II -- typically characterized by less dramatic highs and more sustained periods of depression -- it can be debilitating. And her decision to step up her treatment and take some time in mental health facility illuminates the tremendous emotional toll that caregiving can take.

Whether we're bipolar or not, Zeta-Jones' recent intense stress ride is one many of us can relate to. In the past eight months, I've been on all kinds of sides of this one myself: I've endured a diagnosis of malignant skin cancer, had one of my best friends face a grueling bout of ovarian cancer, and watched my father-in-law careen from rough but manageable Stage 3 stomach cancer to a terminal diagnosis to death within a three-week span. And if I've learned anything, it's that while being the patient sucks a lot, having someone close to you get cancer is no day at the beach either.

Illness is like a traffic pileup on the I-95. The life of the person with the diagnosis screeches to a halt, and everybody close to that person suddenly can't move forward unimpeded either. Time is lost from work. Sleep is interrupted. Meals are skipped. The little jobs that used to fall to the sick person now have to be delegated to others; all the cooking of dinners, the pickups from school, the paperwork and car inspections and loads of laundry still need to get done. The sick person's inner circle has to pick up all of that, while shuttling the patient to an unimaginable number of doctor visits and chemo treatments, dispensing pills, tending surgical wounds, consoling children and, somewhere in all of it, managing their own fears and griefs and immense, agonizing powerlessness. When I got cancer, I thought it would damn near kill me. But when I watched two of the people I love most in the world get cancer, I thought it would damn near kill me too.

In the midst of a trauma, caregivers often feel they don't have the luxury of tending to themselves. That's how people end up looking like Aurora near the end of "Terms of Endearment." Yet the physical -- and emotional -- toll of living through someone else's life-or-death crisis is utterly grueling. And it's sometimes not until the worst of the storm has passed that the devastation can truly be assessed. Michael Douglas and Catherine Zeta-Jones are fortunate to be successful enough to be able to afford all the private nurses and nannies and transportation they need. Zeta-Jones isn't likely sobbing by the washing machine at midnight, or hastily slapping together cheese sandwiches for the kids while running late for school drop-off, or forgetting whether she washed her face today. But she surely knows what it feels like to hold the hand of a man she loves while doctors poke around his lymph nodes. She knows what it's like to reassure her children about what their father is going through. She knows how long a night can be, and, clearly, how dark and depressing a day can be as well.