The actress and her husband, David Arquette, confirm the tangled reality of breakups 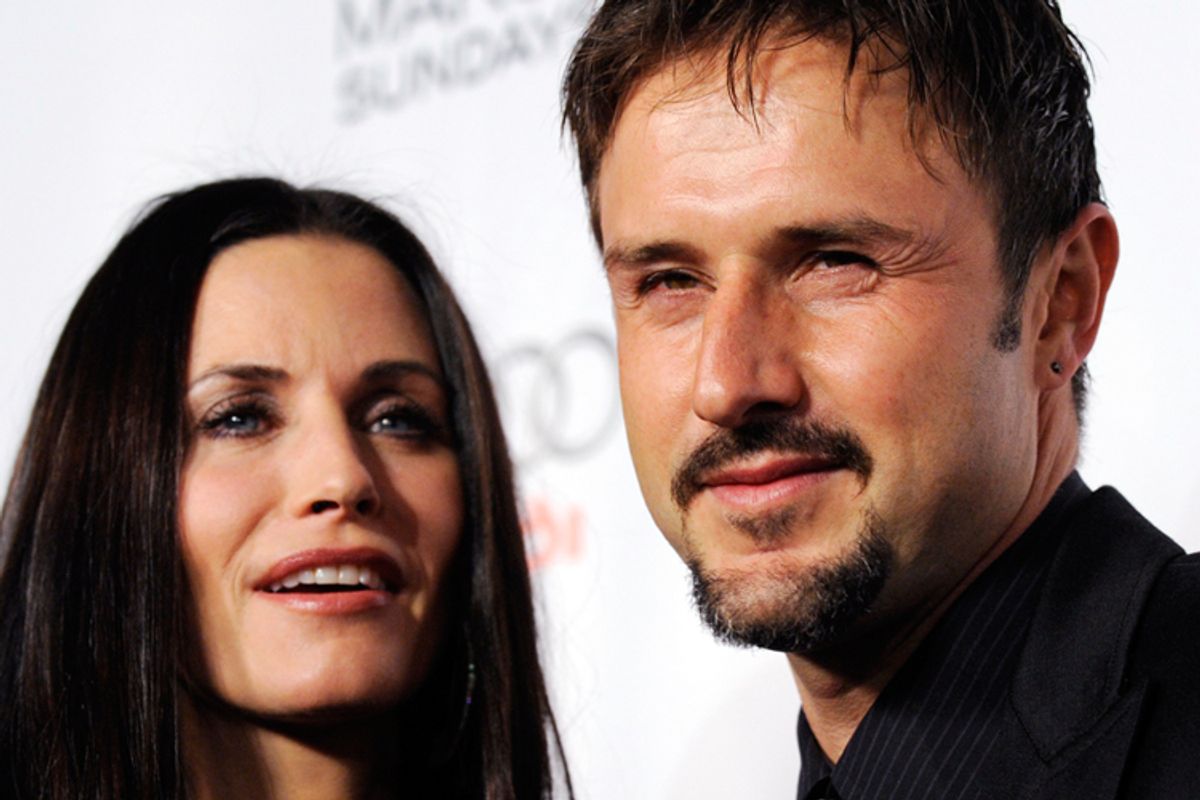 It's complicated. After announcing their separation last year, Courteney Cox and David Arquette have refused to play the part of a couple whose breakup is tidy, linear or, for that matter, even irrevocable. While plenty of couples know how to part ways with a simple signature on the divorce papers and an unmingling of the appliances, the Hollywood duo has been frank about the fact that for others, especially those with kids, marriage is a considerably messier affair.

On Howard Stern's show earlier this week, Arquette -- who has spoken in the past about how having sex with other women made him feel "pretty manly" yet also made him cry -- copped to trying to bust a move on his estranged wife during a family trip to Disney World. Or, as he put it, "Listen, I tried to fuck her, and she doesn't even want me." Apparently his smooth come-on line to her that "This is the happiest place on Earth! Let’s make it happier!" only got him to the makeout stage; he admitted: "We were ... eighth graders. Seventh graders."

While any other woman in the world might be out somewhere clawing her eyes out in embarrassment at this point, Cox is pretty familiar with both her not-quite-ex-husband's antics and his penchant for discussing them. Months ago he announced that the couple ceased intimate relations some time ago, and said, "We're not having sex, and I completely understand." But Cox herself is no slouch in the 411-dispensing department. She showed up on Stern this week with Arquette to admit, "I don’t think we tried our hardest." She also took to Wednesday's "Letterman" to give her side of the Disney adventure, telling her host, "He did try to hit on me, yeah. He hit pretty hard, and I said, 'You know, you don’t have the Fast Pass right now. Not to that ride!'"

Cox and Arquette have, from the first announcement of their separation, been candid about its ambiguous nature. Last year, they issued the statement that "The reason for this separation is to better understand ourselves and the qualities we need in a partner and for our marriage." And later in the week, Arquette, who recently celebrated 100 days of sobriety but clearly seems to not yet have joined Oversharer's Anonymous, told Stern, "We have a family together. We have beautiful love. She makes me laugh like nobody. We can live a happy life together."

Cox, for her part, seems to be dropping some subtler hints about the workings of her own heart these days. Last month, in an interview for Harper's Bazaar,  she confessed, "If it doesn't work out, I will have huge waves of pain about failing in that department. Right now I don't have that because I don't know what the future holds and I guess because I have strong feelings for him." It's a believable admission from a woman whose wedding ring was engraved with the phrase "A deal's a deal." But the actress, who recently returned from a vacation with her "Cougar Town" costar Josh Hopkins (although Arquette tactfully insists Cox "hasn't fucked anyone!"), told Howard Stern that she lately feels "more hopeful about [Arquette's] life and him finding someone." And on Letterman, she joked that she and Arquette both assume if this whole marriage thing doesn’t work out, he'll soon enough be with "somebody named Tiffany or Britney."

When a couple hits the skids, the paperwork is often already being drawn up by the time the rest of the world finds out they were even having trouble. But relationships rarely follow a path that is either easy or straightforward. Somebody messes up. Somebody tries to give it another chance. Towels are thrown in and hastily reclaimed. Then the roles reverse, with more deaths and reanimations along the way than the "Saw" franchise. That back and forth is more typically done in private, but that doesn't make any of it any less conflicted and confusing.

Arquette calls Cox "the greatest woman I've ever met." Cox says she loves Arquette "more than anything in the world." Sometimes, you can adore the hell out of someone and still not be able to spend the rest of your life with him or her. When you think about it, the fact that any two people can stay within a mutually compatible range of affection for each other for any length of time is miraculous. And when there are children involved -- Cox and Arquette have a 6-year-old daughter, Coco -- the relationship never really ends, regardless of what your legal status is. Or as a friend who got divorced when her son was an infant puts it, "Someday, I'm going to be at my kid's wedding, and my ex and I will be right there together next to him."

The pressure to stay or get off the pot can be intense. People want to know your status, as if a relationship years in the making and undoing can be summed up in a Facebook click. But breaks are rarely clean, and Cox and Arquette's complex tangle fascinates not because it's so unorthodox, but because it's so true to the experience of many couples' lives. Cox says: "I don’t know what’s going to happen. I really don’t. I’m sure this decision needs to be made at some point, but we’re getting along so well that I hate to rock the boat. I really do." And while a lucky few people in the world may know the feeling of falling in love at first sight, nobody ever gets the luxury of falling out of it that fast.