"Our Footloose Remake" and the rise of the crowdsourced fan film 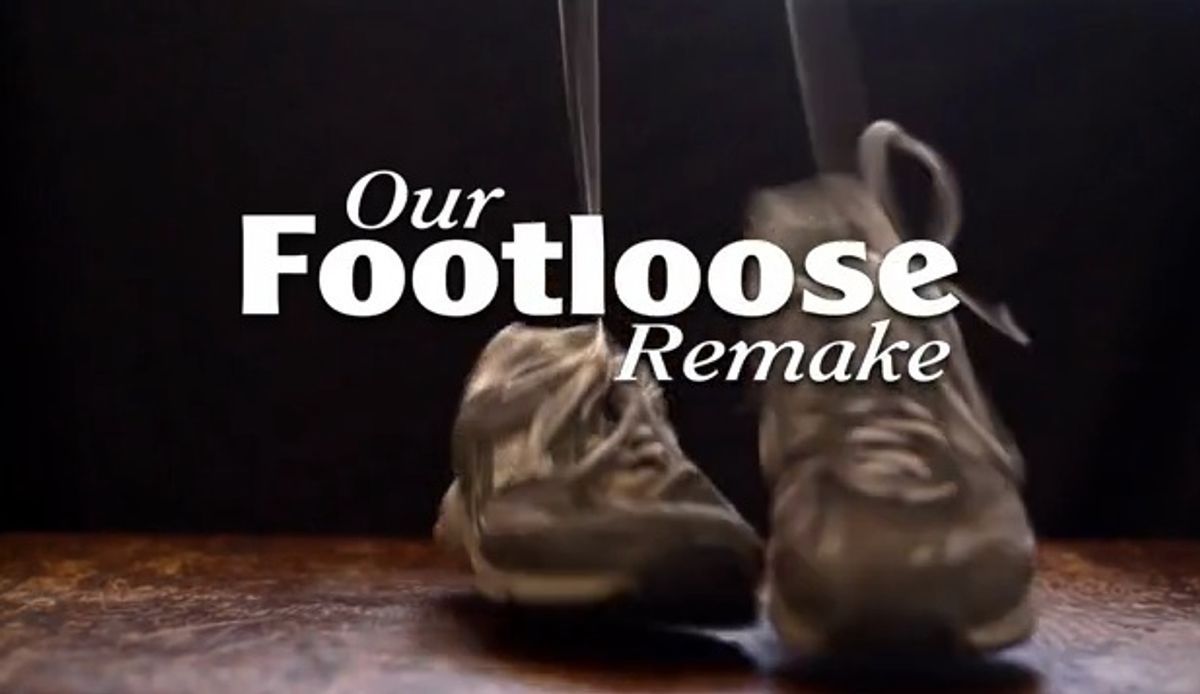 45 filmmakers collaborated to create their own version of "Footloose."
--

Finally, the film we've all been waiting for: a remake of 1984's "Footloose." No, wait, don't leave yet! What if I told you this wasn't the updated version that has suffered from a hundred setbacks (not the least of which being the lack of a major star for the Kevin Bacon role), but rather a painstaking compilation of 54 directors from around the world who each separately shot every scene in the movie and then edited them together? Yes? Check out TheFootlooseRemake.com  to read all about it:

We are a collection of amateur filmmakers and video-making enthusiasts, who recreated the Kevin Bacon classic. Different filmmakers from "around the world" have divided the original 1984 Footloose into 54 different scenes. A collaborative work of friends, "Our Footloose Remake" is our message to the Hollywood remake machine.

In October 2008 it was announced that Paramount Pictures and Dylan Sellers Productions would be remaking the classic Footloose, starring Zac Efron. We were fed up. The Hollywood remake machine was going to take another solid movie, put it through the ringer, and make a buck from a younger generation.

We decided "Let’s beat them to the punch. Let's do this remake our way."

Oh, and here is the entire movie, if you have a spare 90 minutes on your hands.

Our Footloose Remake (Full Movie) from DaveAOK on Vimeo.

"Our Footloose Remake" is only the latest homemade mashup in a string of recent collaborations. "Star Wars Uncut," created by one of Vimeo's developers, challenged people to  send in 15-second segments of "A New Hope." The clips that were voted the highest eventually became part of the final "Star Wars Uncut" film, although the site is interactive so you can literally go through every submission and create your own, collaged version of the film composed of totally different actors and settings.

Then there's the Webby-nominated "Office Fanisode," where NBC took the same concept as "Star Wars Uncut" and had future superstars (or really bored office employees) reenact partial scenes from the Season 6 episode "Murder."

These movie mashups ... collages ... remakes ... whatever you want to call them ... are interesting because of the Internet group dynamic involved here: They are projects that inherently require a vast amount of social networking in order to be successful. (What if only three people had sent in clips to any of the above films?) Compare it to, say, the similarly themed "Raiders: The Adaptation," where it took three boys six years to complete their shot-for-shot remake of "Indiana Jones and the Raiders of the Lost Ark."

There's an impulse to lump what the Mississippi boys did with "Raiders" in with the current "Star Wars"/"Footloose"/"Office" mashups: After all, aren't they all just low-budget labors of love? But what the Internet affords us now is a form of "Sweding" that is fast, competitive (your scene has to be picked from everyone else who is taping the same thing), and ultimately requires less individual effort for the sum total effect. In short, we're seeing more of these types of crowdsourced remakes because they are easier to do.

Does that mean we lose something in the transitions between "Raiders: The Adaptation" and "Our Footloose Remake"? Probably. But we're gaining something too, with filmmaking becoming a more social, communal experience, one that ultimately has a chance to be seen by millions, thanks to the viral nature of these projects. They might not be as rabidly dedicated as "Raiders" was, but they still take time, commitment and a love for the source material in order to pull off. Just like its Hollywood counterpart, the movie remake industry is changing with the times. All we can do is hope that its heart stays in the right place.