"Scream 4": More meta than ever! And almost as much fun

Neve Campbell, Courteney Cox and Ghostface are back in a dizzyingly self-aware fourth entry to the horror franchise 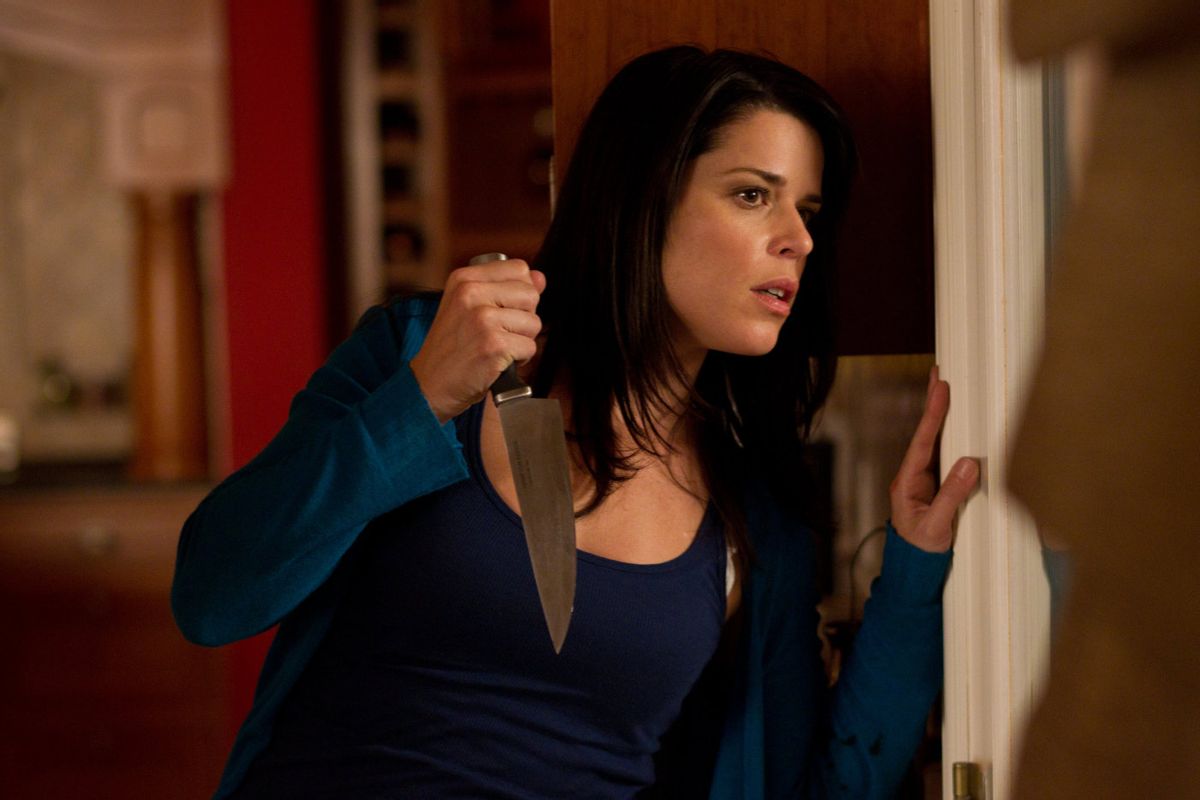 Wes Craven totally gave at the office, when it comes to reinventing the horror genre. He's done it three times -- with the drive-in classics "The Hills Have Eyes" and "Last House on the Left" in the '70s, with the original "Nightmare on Elm Street" franchise in the '80s (and wasn't he smart to avoid the abysmal 2010 reboot?) and with the "Scream" trilogy in the '90s. Asking him to do it all over again, at age 71, in a movie that's a sequel to a sequel to a sequel and that's an exercise in not just postmodern nostalgia but nostalgia for postmodernism, well, that's just asking too much. I mean, isn't it?

The fact that Craven almost pulls it off in "Scream 4," a movie that's somewhat entertaining, occasionally scary and only sporadically migraine-inducing in its level of Jesuitical, self-referential cleverness is -- OK, no, not miraculous. That's a cliché. It's almost really cool, without quite being really cool. If you viewed the laffs and thrills of the original "Scream" series through a delighted scrim of adolescent self-awareness, then "Scream 4" will probably provide an enjoyable return visit to Woodsboro High, whose student body metastatically feeds on horror movies (thereby justifying all the clueless culture-trolls' concerns about their pernicious effects).

If, like me, you were not merely old enough to shave during the first round of "Scream" but old enough to date divorced people, then "Scream 4" is pretty much a minor diversion. Thing is, you can't push postmodern horror any further than Craven has pushed it already; the characters in "Scream 2" and "Scream 3" were as conscious of horror-movie conventions (and their reverses, twists and turns) as you can get, and Craven's 1994 "New Nightmare" capped the Freddy series triumphantly by melting the boundaries between fiction and reality and having Craven, Robert Englund, Heather Langenkamp, studio head Bob Shaye appear as "themselves."

Needless to say, "Scream 4" begins with two teenage girls watching a horror movie and complaining about "the whole self-aware, postmodern meta shit," right before they receive an ominous phone call from some gravel-voiced dude asking them about their favorite scary movie and promising to slice them up. But wait! Those girls are actually in the fictive universe of "Stab 6," near the tail-end of a slasher series based on the Woodsboro killings -- and they're being watched by two other girls, who discuss whether the series should be updated by way of Facebook and Twitter (and who turn out, naturally, to be characters in "Stab 7"). Later on, we'll see some scenes from the original "Stab," and if we already learned at some earlier stage that that was "a Robert Rodriguez film," I'd forgotten it. Did Rodriguez really direct that footage? Or is that Craven imitating the younger director's style? Or -- never mind, my head hurts.

At the risk of stating the way-too-obvious, when we get back to the supposedly-fictionally-real world of Woodsboro and "Scream 4," where a couple of teenage nubiles who've been watching horror movies get hacked up by the latest incarnation of Ghostface, it's been all destabilized and stuff. None of these levels of narrative is any more or less convincing than any other, and while I guess that might be the point, it only gets you so far. It's tough for Craven and screenwriter Kevin Williamson (who has spent his "Scream" caesura working in TV: "Dawson's Creek," "Hidden Palms," "The Vampire Diaries") to get any traction in the main story, which is too bad because it's cleverly handled and delivers about the right proportion of shocks and giggles.

Sidney Prescott (Neve Campbell) has come back to Woodsboro as a best-selling self-help author, a decade after surviving the previous iteration of Ghostface murders. But Sidney, as someone murmurs, is "the angel of death," and her arrival has reawakened the snarky evil that gnaws at the heart of this horror-mad suburb. (Are teenagers, circa 2011, really this obsessed with semi-classic horror flicks? Now that's nostalgia.) Her old pals Sheriff Dewey (David Arquette) and one-time TV reporter Gale Weathers (Courteney Cox) are now a screwbally, sparring married couple, with Dewey constantly endangered by the worshipful attentions of a lemon-square-baking blond deputy (Marley Shelton).

But even Craven can't risk making a horror movie stocked only with middle-aged actors -- Campbell is 37, Arquette is 39 and Cox is 46 -- so it's Sidney's teenage cousin Jill (Emma Roberts), her ballsy, slightly butch best friend Kirby (Hayden Panettierre) and their circle of friends who become the focus of the latest Ghostface outbreak. High-school movie nerds Charlie (Rory Culkin) and Robbie (Erik Knudsen) stream live Web video and supply the requisite running commentary: It turns out that the new Ghostface is mimicking the sequence of killings in the original series (that is, in the first "Stab" movie), which makes his/her approach more like a "scream-make" than a "shriek-quel." The only way to escape Ghostface's vengeance, someone suggests, is to be gay -- which is sort of a clue, but does not turn out to work.

It's mildly pleasant to see Cox and Arquette work their shtick together, and Campbell manages to keep her sober, haunted demeanor intact throughout the silliness. There are some nice supporting bits, including Alison Brie (of NBC's "Community") as an overly wired, multitasking young publicist who tells Cox's Gale, "You were my '90s" -- we're glad to see Ghostface dispose of her! -- and Anthony Anderson as a wisecracking deputy whose fate is sadder. As usual, Craven and Williamson have a nicely concealed plot switchback and a ponderous conclusion, which reaches for a "Taxi Driver" level of significance without quite earning it. As Emma Roberts' shrewd and witty protagonist observes, these days "you don't have to achieve anything -- you just need to have fucked-up shit happen to you." I could ask whether the cheerfully revived zombie corpse of a decade-old horror franchise that was at least half in jest is really the right venue for a lecture about authenticity. Except I don't want to know the answer.