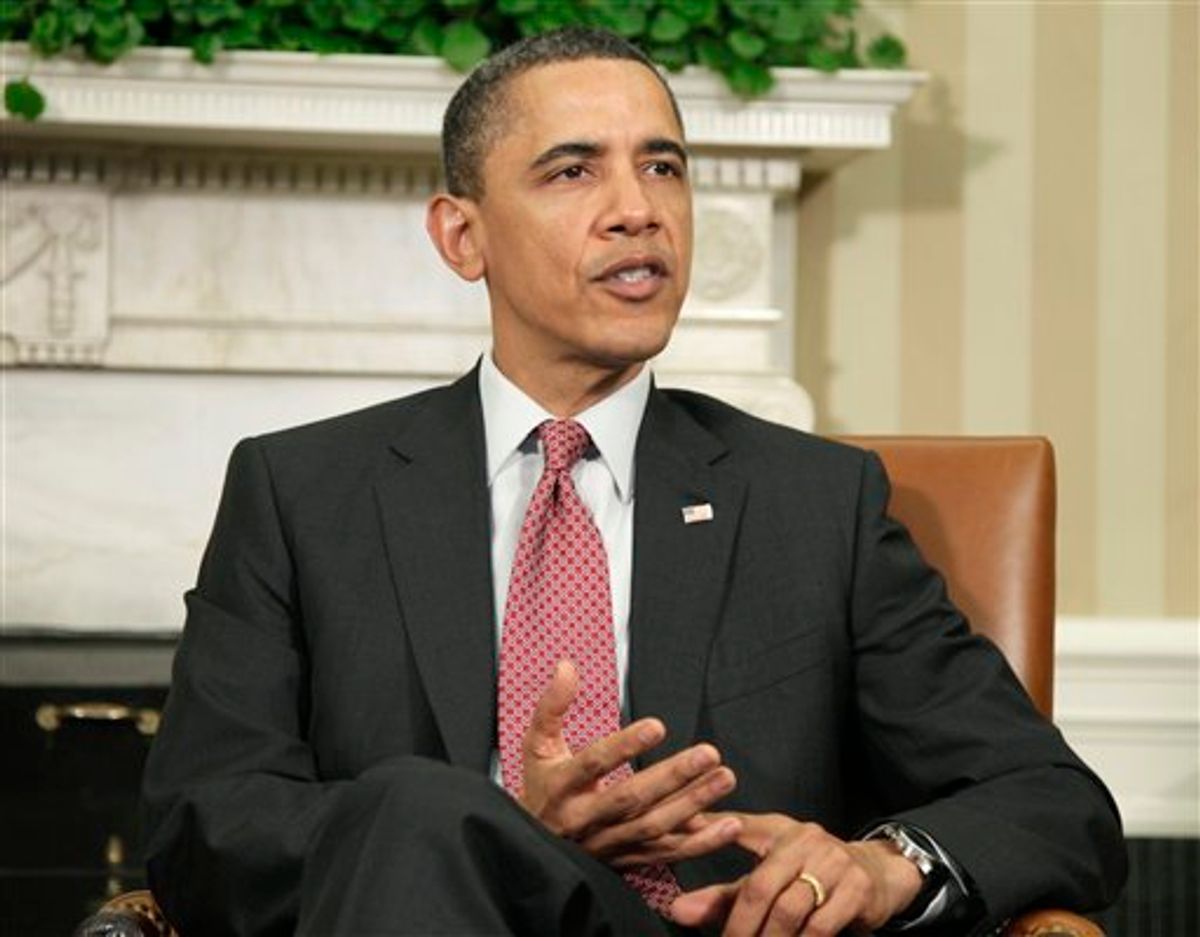 President Barack Obama speaks in the Oval Office of the White House in Washington, Thursday, April 14, 2011, while meeting the the co-chairmen of his deficit reduction commission. (AP Photo/Carolyn Kaster) (AP)
--

Let's get real. Ten or 12-year budgets are baloney. It's hard enough to forecast budgets a year or two into the future. Between now and 2022 or 2024 the economy will probably have gone through a recovery (I'll explain later why I fear it will be anemic at best) and another downturn. America will also have been through a bunch of elections -- at least five congressional and three presidential.

The practical question is how to get out of the ongoing gravitational pull of this awful recession without kowtowing to extremists on the right who think the U.S. government is their mortal enemy. For President Obama, it's also about how to get reelected.

(Yes, we also have to send a clear signal to global lenders that America is serious about reducing its long-term budget deficit. But in truth, global lenders don't need much reassurance. Bond market yields in the U.S. are now lower than they were when the government was running a budget surplus 10 years ago.)

Seen in this light, Obama's plan isn't really a budget proposal. It's a process proposal.

Stage 1, starting now and ending in June, requires that Republican and Democratic leaders devise a budget for 2012. Apparently they've already agreed to try.

That budget would also include a "framework" for deficit reduction over the longer haul. But that framework will be mainly for show. It will give House Republicans enough cover to vote to raise the ceiling on the amount the U.S. government can borrow. (The vote has to occur before the Treasury runs out of accounting maneuvers, in early July.)

And because the framework's details will be filled in after Election Day, it will give Obama wiggle room before the election to campaign on his priorities. If he wins big -- and if Democrats retake the House -- its details will look completely different from what they'd look like in the alternative.

Stage 2 occurs in 2014 -- fully two years after Election Day. Then, according to Obama's proposal, if the ratio of the nation's deficit to the GDP hasn't fallen to 2.5 percent (it's now over 10 percent), automatic across-the-board cuts will go into effect to get it there.

Importantly, these cuts wouldn't apply to Social Security and Medicare, or to Medicaid and other programs designed for the poor. And they wouldn't be limited to spending. They'd also apply to tax expenditures -- that is, to tax deductions and tax credits.

The betting in the White House is that by 2014 the recovery will be in full force, and the economy will have grown so much that the ratio of deficit to the GDP will be in the range of 3 to 5 percent anyway. That means any across-the-board cuts wouldn't have to be very deep.

The White House is also betting that a strong recovery will take the sting out of any recommendations to slow the growth of Medicare spending emanating from the Medicare board set up under the new healthcare law (officially known as the Independent Payment Advisory Board). Under Obama's new plan, such proposals will be necessary if Medicare spending grows .5 percent faster than growth of the economy (under the law, it's 1 percent faster).

All told, it's a clever strategy. It might well avoid a dangerous game of chicken over raising the debt ceiling. It still allows the president to charge Paul Ryan and other Republicans who join him as ending Medicare as we know it -- which they are, in fact, proposing to do. (This may help Democrats win back seniors, whose support for Democratic House candidates dropped form 49 percent in 2006 to 38 percent in 2010.) And it gives the president lots of room to maneuver between now and Election Day, and between Election Day and 2014.

But there's one big weakness. The whole thing depends on the recovery picking up steam. If the economy doesn't, the process could backfire -- leading to indiscriminate budget cuts later on, as well as big cuts in Medicare. Indeed, if the recovery fails to fire up, Obama's own chance of reelection is dimmed considerably, as are the odds of a Democratic House after 2012.

Yet what are the chances of a booming recovery? The economy is now growing at an annualized rate of only 1.5 percent. That's pitiful. It's not nearly enough to bring down the rate of unemployment, or remove the danger of a double dip. Real wages continue to drop. Housing prices continue to drop. Food and gas prices are rising. Consumer confidence is still in the basement.

By focusing the public's attention on the budget deficit, the president is still playing on the Republican's field. By advancing his own "12-year plan" for reducing it -- without talking about the economy's underlying problem -- he appears to validate their big lie that reducing the deficit is the key to future prosperity.

The underlying problem isn't the budget deficit. It's that so much income and wealth are going to the top that most Americans don't have the purchasing power to sustain a strong recovery.

Until steps are taken to alter this fundamental imbalance -- for example, exempting the first $20K of income from payroll taxes while lifting the cap on income subject to payroll taxes, raising income and capital gains taxes on millionaires and using the revenues to expand the Earned Income Tax Credit up to incomes of $50,000, strengthening labor unions, and so on -- a strong recovery may not be possible.