Pick of the week: The greatest war film ever made?

Spectacular and troubling, "Armadillo" follows a group of Danish soldiers into a gruesome Afghan firefight 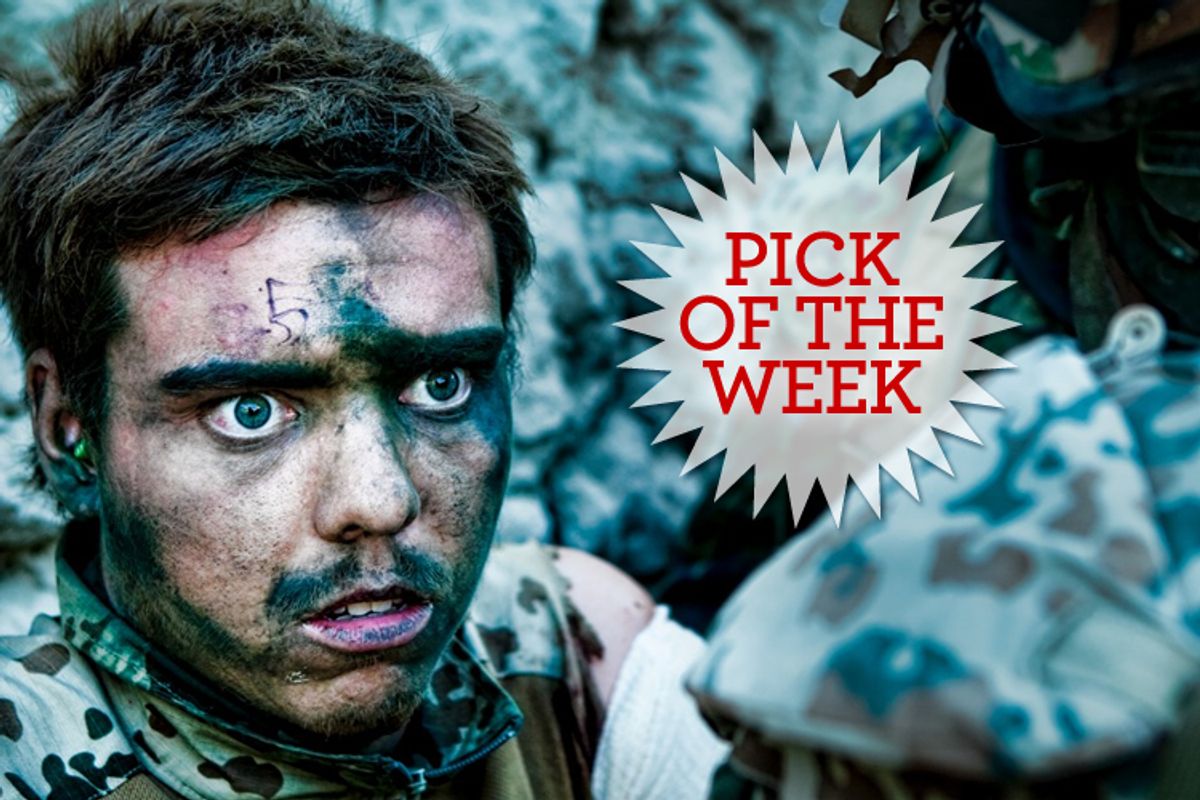 A still from "Armadillo"
--

Have things improved in Iraq and Afghanistan since we decided to gung-ho the hell over there and blow stuff up? Let's just say that expert opinion is divided on that question, but the movies have been amazing. You could curate a dynamite film festival out of post-9/11 war movies, both documentaries and narrative features, starting with Michael Tucker and Petra Epperlein's prescient "Gunner Palace" -- made in 2004, just as the Iraq conflict was going seriously south -- and moving forward through "The Situation" and "Iraq in Fragments" and  "Battle for Haditha" and, of course, "The Hurt Locker" and last year's Oscar-nominated, you-are-there documentary "Restrepo."

So Danish director Janus Metz's widely acclaimed "Armadillo" (winner of the Critics' Week prize at Cannes last year) arrives in a crowded field and belongs to a familiar genre: Meet a group of ordinary, likable guys -- and then go with them into hell. It isn't in English and reflects a non-American perspective, which only makes it less likely that it will find any kind of audience here. That doesn't change the fact that it's a brilliant work of cinema, a nonfiction film as intense and visceral as any drama, and an emotional and moral experience that feels horrifying and exhilarating at almost the same moment. Metz and cinematographer Lars Skree spent six months in 2009 living with a group of Danish soldiers at Forward Base Armadillo, in the opium-rich province of Helmand in southwestern Afghanistan, where they experienced several firefights with Taliban forces dug in less than a mile away. The filmmakers were fortunate to come back to Europe alive -- and what they came back with was a mesmerizing, beautiful and terrifying documentary that can stand among the greatest war movies ever made.

"Armadillo" has provoked something close to a political firestorm in Denmark, a customarily calm social democracy with a smaller population than New York City and greater income equality than any nation in the world. Only a few hundred Danish volunteers have joined the United States-led coalition forces in Iraq and Afghanistan, but war is war, and as the climactic scene in "Armadillo" makes clear, it's often very ugly indeed. Metz and Skree were on hand to witness a hair-raising battle that ends when a small detachment of Danes ambushes a group of Taliban snipers in a ditch, and let's be very clear about this: What you see in the film is death, right up close, and everything about it is dreadful.

Whether the Danish soldiers engage in vicious, callous or criminal conduct, as some commentators have suggested, is perhaps a subjective question, or one that looks different to European eyes than American ones. What I saw in "Armadillo" was a group of amped-up young men high on the drug of war who survive a kill-or-be-killed situation, one where moral considerations have all but evaporated. Their behavior is not exemplary but it seems comprehensible, and those of us watching cannot know what we would do in the same situation. This is a cliché that's applied to war movies way too often, but your political outlook and opinion about the Afghan conflict are pretty much irrelevant to "Armadillo." It's a strict cinéma-vérité film with no narration or commentary; war opponents can find plenty of evidence that the whole endeavor is a pointless morass, while those who believe that the Taliban must be defeated, whatever the price, may conclude that these young soldiers and others like them are making a valuable sacrifice and slowly turning the tide.

I guess those questions can never be overlooked, given how much of the Western world's so-called prestige, not to mention America's national debt, is tied up in the Afghan conflict. But at the risk of retreating to aesthetics, let me say that Metz and Skree have made a movie that is first and foremost a movie, a sensuous widescreen landscape of helicopters and mist-shrouded groves of trees and agricultural canals and bored, agitated young men who ride motorcycles and watch pornography and risk their lives every day for ambiguous reasons. I assume "Armadillo" was shot in the field on digital video and then blown up to 35mm, but it so magnificently constructed that I became disoriented at certain moments: That isn't an actor convincingly rendering a man in shock; he's actually been shot. That isn't brooding Method acting; that guy has just learned that a mortar shell whose target he selected has killed a little girl.

Every 21st-century war film tries to grapple with the eerie disconnection of modern warfare, whose soldiers return (if they do return) to a comfortable consumer society that seems less than eager to know about what they saw and felt and did. Jeremy Renner's memorable "lost in the supermarket" scene in "The Hurt Locker" was one version of this, and Metz delivers an intimate, distinctly Nordic response, with the soldiers of his platoon arriving home to a small country that's so polite and clean and pleasant that it seems as if the grisly deaths we witnessed in that ditch in Helmand province couldn't have happened in the same universe. "Armadillo" can't resolve the vicious moral and philosophical conundrums of war in general or this one in particular, but it may do something even more valuable: Whatever you think -- or whatever you think you think -- it will leave you shocked, gasping, uncertain.

"Armadillo" is now playing at the IFC Center in New York, with more cities and DVD release to follow.