Pauly D., 50 Cent, and the legitimization of reality stars

The "Jersey Shore "star is courted by the rapper for a 3-album deal, leading us to wonder, who really needs who? 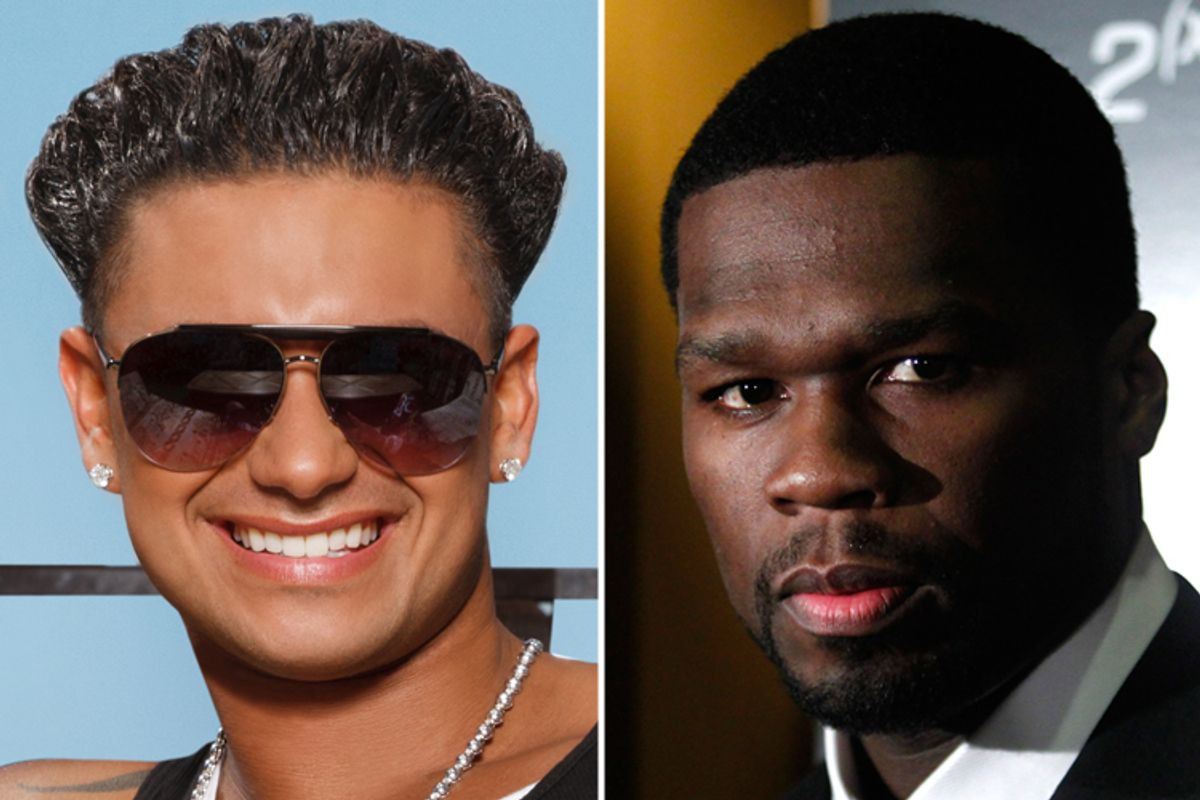 Which one of these two men is more famous?
--

"Celebreality": remember when VH1 coined that term to apply to their C-lister lineup where once-famous celebs debased themselves on reality shows? There was "The Surreal Life," "Hogan Knows Best," "Breaking Bonaduce," and my personal favorite, " Celebrity Paranormal Project." The concept was as ingenious as it was voyeuristically cruel: by definition, anyone who tried to become famous through reality television was the lowest of the low – a "nonebrity" in Hollywood terms – and by having cameras follow these once famous stars as they tried to claw some back some modicum of relevance in popular culture, they captured the catch-22 of people trying to make themselves a household name again only as far as they were willing to become a "Z-lister."

Meanwhile, reality stars were somehow becoming more legitimate than their actor counterparts. Whereas stars of "The Real World" once had to fight in order to make sure their flame didn't die out the moment they stepped off-camera, today "stars" like Snooki, Spencer Pratt, and the Real Housewives make more money for just showing up at a club than they ever could "acting." They've somehow transcended their Z-list status, or at least learned how to put the Z's before the G's. (That is a term for money, in hip-hop vernacular.) We saw last night Anderson Cooper's faux-outrage over Snooki getting $2,000 more than Toni Morrison for her speech at Rutger's University, but is anyone really surprised? We've just shifted "celebreality" to mean "realitycelebs."

Consider the latest news, that rapper 50 Cent is actively courting "Jersey Shore's" Pauly D. for a three-album deal. According to TMZ, 50 (aka Curtis Jackson) "wants to hammer out the deal ASAP ... before Pauly jets off to Italy to shoot 'Jersey Shore' Season 4." Now why would a legitimate celebrity like 50 Cent be desperate for Pauly D. to sign onto his label?

It all comes down to the fame game: while 50 Cent might be more "famous" in the traditional sense, Pauly D. has a broader cultural reach right now, something that Jackson is acutely aware of. (See his Twitter feuds or his rumored love affair with Chelsea Handler for more evidence.)

Pauly D. might be a nobody by the time "Jersey Shore" is over and done with; his DJ career might amount to nothing, but for right now he is worth his weight in pop culture gold. The symbiotic relationship between an actual celebrity and a reality show star works out nicely for both of them: lending an air of credibility to Pauly D.'s work while giving 50 Cent a jump on the MTV-watching youths who could watch that network all day without ever seeing a music video.