Fans of the would-be presidential candidate accuse us of taking "cheep shots," declare us the real clowns 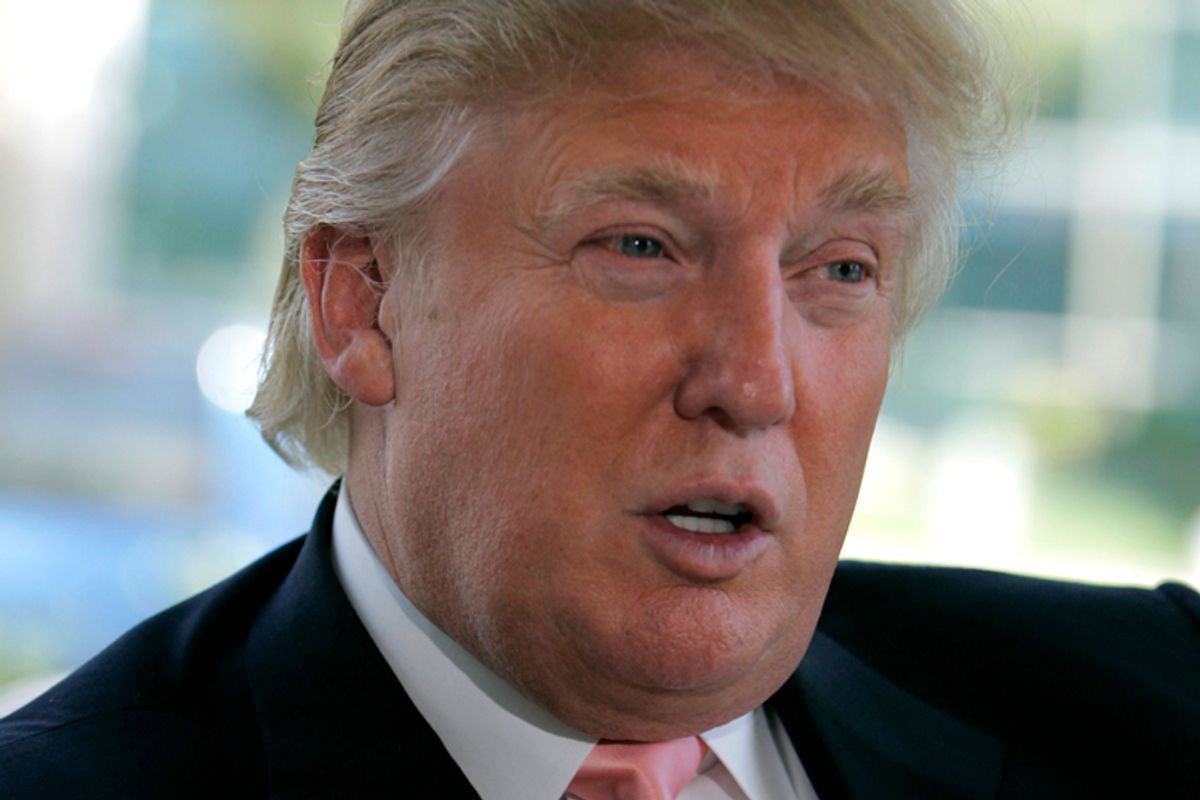 We have written one or two items on the apparent political ambitions of a television personality named Donald Trump this week, and some admirers of Mr. Trump have found our coverage to be ... unfair. Mr. Trump himself has a well-known habit of writing love notes to media outlets that cover him. We've yet to be lucky enough to receive one -- I'm not sure he knows how to use the Internet -- but many of his fans took it upon themselves to defend him.

Even some people who claim to not be Trump supporters thought we were a little hard on the guy! Like the reader who emailed me to say only this: "I'm not a Trump supporter, but your article about trump was simply pathetic. End of conversation."

Most other writers were less brief. Take Teddy, whose entire email was in italics, and who wanted to know what, exactly, is so "outlandish" about keeping Bibles "in a certain place":

I think that if I were running for president, and such allegedly ridiculous allegations were leveled against me and my eligibility to be president, I would quietly release the “long form” to some credible news organization(s), and force the conspiracy theory to retirement in short time, thereby sparing us all the “circus”.

The general public, and voting populous, would be even bigger and sadder clowns to accept that such an allegation, (birther claim) is null and void just because the 3-ring media say so, and because the presidents handlers have released a newly printed short-form. Do you not see that the crew at The White House feeds all the frenzy with their refusal to cooperate, refusing to submit what should have been required to begin with?

What is so outlandish about Mr. Trump storing The Bibles, as you have highlighted: “in a certain place”?These were supposedly gifts to him. If you received hundreds, or thousands of gifts,and if you are like most of us, you would attach some measure of sentiment, and if you didn’t display them all, you might have a tendency to “store them”. Maybe I am missing your point somewhere.

A rival candidate for clown might be among all those sitting in ivory towers with pens in hands who try to tear down one who see things though an unconventional view, and who dare to stand up to the status quo, even if their pictures are photo-shopped with facial fashions reminiscent of Barnum and Bailey.

Ben wanted me to examine something:

Subject: Re: Donal Trump is losing it

If you have noticed, both parties have lost it. They act no different than entitled, self-important fraternity and sorority drunks. the government shut down show put on by our leaders was a page taken from the cartoon show south park.

Examine the fact that Donald Trump is the sign of the times.

Our leaders don't have American citizens as their priority!

Tom was sick of cheep shots:

Subject: hysteria in the media and taking cheep shots could deny the U.S. a serious candidate who is right for the times

You introduced him as a billionaire and then tried to label him as just a television personality. That is inconsistent, unless you think making a billion dollars does not require skill.

Peanut farmers, movie actors, etc. have been president with fewer qualifications than this man.

Take a harder look, you will see he is what the country needs. I wish he ran as a democrat, but that was not a practical option. Just because he is a running as a republican it doesn't make sense to paint a clown face on him.

Please look at what he has accomplished and how that is appropriate to our times.

I have looked at what Mr. Trump has accomplished, and I am less than impressed. Though this is a novel interpretation of "taking on the banks." He really stuck it to those fat cats when he defaulted on a $40 million loan that he personally guaranteed.