The edible fern is a standard for foragers, but I struggled to find them -- and to figure out how to cook them 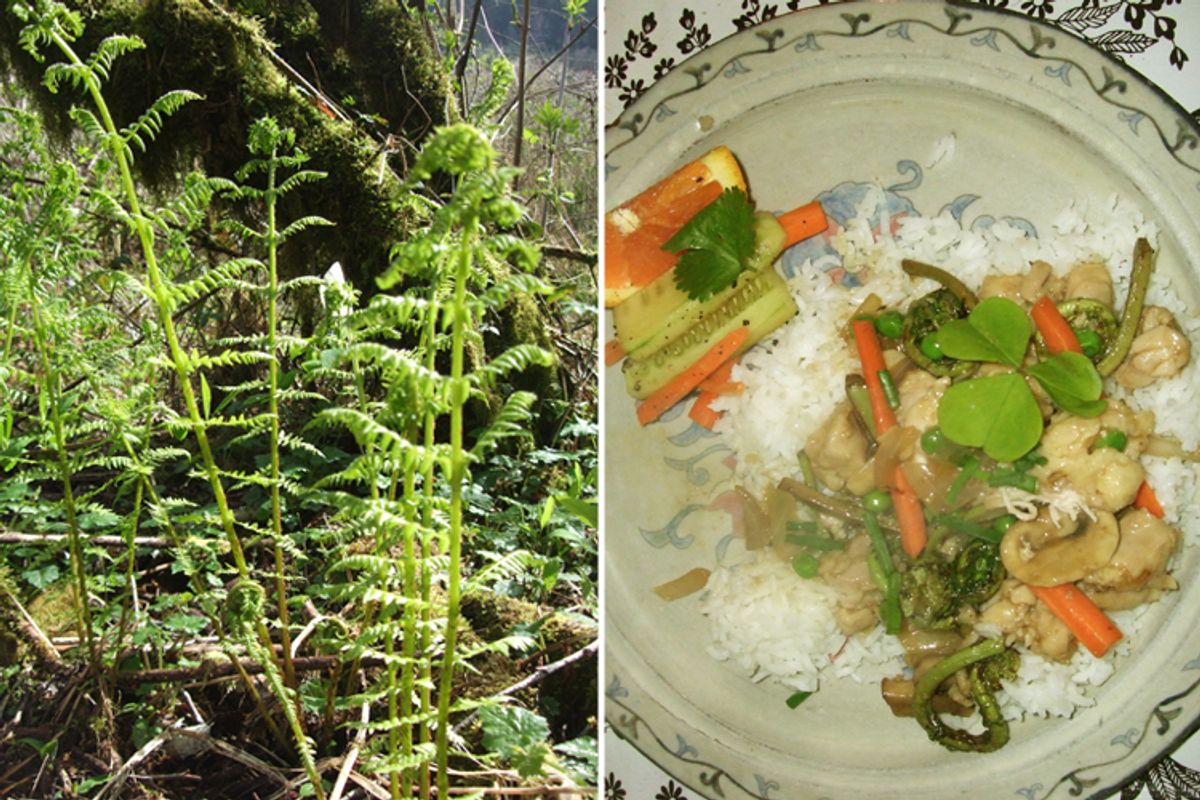 Fiddleheads near the author's Oregon home, and the stir-fry she made with them.
--

For foragers, spring is synonymous with fiddleheads, or the furled tips of ferns. Because fiddleheads are such an obvious choice of topic at this time of year, I determine I should go a step further. "Now that I'm a professional scavenger," I reason, "I should be pushing the envelope." Armed with my copy of "Plants of the Pacific Northwest Coast," I head outside.

In a rare spell of late afternoon sunlight, the fields below my house are bright, saturated, unearthly. As I walk down our driveway, I note stately trillium, spring beauty beginning to blossom, and an army of false Solomon's seal poking through a vast carpet of springy moss. I see tender green fiddleheads unfurling from the wet black dirt, but I pass them by and head for a dark mass of mature sword ferns.

According to my book, Northwestern tribes such as the Squamish, Makah and Quileute ate sword fern rhizomes; they roasted or steamed the fern's rootlike underground stems in traditional pit ovens, then peeled back the skin and dug in. Granted, the book also mentions that sword fern rhizomes were "starvation food" for the tribes. I ignore the implications of this bit of information in favor of images of roasted tubers served piping hot, sheathed in a shimmering layer of olive oil and sea salt.

Stems that connect plants of the same variety, rhizomes are generally horizontal and found underground. I figure uncovering the rhizomes of sword ferns should be relatively easy: I'll find two sword ferns growing adjacent and dig between them. I spot a likely pair and set down my colander and field guide. Dirt cakes deep under my fingernails as I claw through a layer of loam to hit denser ground. While yanking futilely at random roots, I realize identification is not cut and dried. The roots I uncover are spindly and don't seem to connect to the woody base of the fern. I'm up to my elbows in wet dirt and the forest floor is soaking through the knees of my jeans. A large frog crouched at the foot of one of the ferns stares at me malignantly. None of the roots I find look even remotely large enough to peel and eat. Starvation food, indeed.

After fruitless attacks on several hapless plants, I give up on the sword fern idea and set out in search of licorice ferns, another species with supposedly edible rhizomes. Licorice ferns grow on trees, which should make their rhizomes easier to locate. Sure enough, the first fern I pluck from its mossy nest shows a promising hunk of root. I brush away the black dirt and chew on the stem speculatively. The sweetness is intense, almost saccharin. It's interesting, but I don't have the burning desire to incorporate the flavor in my cooking. Besides, licorice ferns are so pretty and delicate that I hate the idea of demolishing hundreds of plants just to make a sweetener -- I have three kinds of sugar and a jar of honey in the house.

I resign myself to the banal fiddlehead. It doesn't take me long to realize my arrogance. Although the fiddlehead may be an old standby in the world of foragers, I'm not exactly a master forager: I'm just a cook and a cheapskate. Forty varieties of fern grow in my region of the Oregon coast range: For a novice forager, finding and identifying the desirable lady fern fiddleheads is much easier said than done. Also there's an element of risk: Mature fern fronds are toxic, so it's important to get fiddleheads at the right stage of growth. To complicate the issue further, some varieties of fiddlehead are not edible -- it's crucial to find the correct plant.

As I stand on the sonorous banks of our creek, I spot multiple clusters of fiddleheads. Tensile and fuzzy with cinnamon colored chaff, they have the alien charm of, say, baby vultures. I'm not dying to eat them. I'm not even sure they're the correct variety. There are two stumbling blocks to the identification process:

1. Just emerging plants look different from their mature counterparts. According to the master foragers, it's best to find a likely fern in the summer, when it's easy to identify, and return to the same place in the spring to harvest fiddleheads. Too late for that.

2. The last time I took a science class, I was 15. I got a D- because I was too busy secretly reading Anne Rice books while listening to the Cure on my Walkman. My science vocabulary is limited, which means that as I flip through my field guides, I have to look every other word up in the glossary.

According to "Plants of the Pacific Northwest Coast," lady ferns should have clustered fronds, erect and spreading, and broadly lance-shaped blades that taper at both ends. The ferns I find seem to match this description, but when I compare a frond with pictures from my field guide and reputable websites, the leaves of my specimen look farther apart. After an hour of cross-referencing, I decide to wait until my more knowledgeable friends can help me positively identify the plant. I sulkily eat a dinner of nettle/dandelion minestrone soup, which is nutritious and perfectly palatable, but tastes like defeat.

The next morning I get confirmation from my friends Nancy and Carmen, and I set to work on the fiddleheads. I harvest only one or two fiddleheads from each cluster; once picked, ferns won't grow back the same year. Back in the kitchen, I spend about five minutes removing the wispy brown scales that cling to the pale scrolls. When the fiddleheads look reasonably clean, I drop the curled shoots in a pot of boiling water for two minutes, drain and set aside for experimentation.

For breakfast I sauté a handful of fiddleheads with onion chives from my garden and throw the mix in an omelet made with eggs I bought from my aunt, who lives down the road. It's good, but it's not fabulous. Though the fiddleheads have a satisfying texture, the eggs and cheese do little to offset the faintly bitter flavor, which varies drastically from scroll to scroll.

For dinner I attempt to counter the bitterness of the fiddleheads with sugar and spice. In a wok, I heat coconut oil and sauté chopped chicken thighs. When the chicken starts to turn white, I remove it and set it aside while I stir-fry onions, chile, ginger, garlic, and mushrooms. I toss in a couple of spoonfuls of cooking wine and add peas, carrots and fiddleheads. In the final minutes, I return the chicken to the wok and stir up a light gravy of soy sauce and brown sugar, which I hope will neutralize the bitterness of the fiddleheads.

The end result is tangy and savory; the sugar and soy sauce mask the bitterness of the fiddleheads but don't erase the wild flavor, which gives the basic stir-fry a kick of spring. Served over rice with a salad of cucumbers and carrots drizzled with soy sauce and the juice of an orange, the meal is excellent, if not exactly cost-effective. As opposed to eating nettles, miner's lettuce or dandelion greens (all highly nutritious, easy-to-identify plants which grow within feet of my house) my fern fiasco has occasioned the use of store-bought luxury ingredients, three expeditions to the creek and about five hours of cross-referencing between field guides and the Web. But hey, you learn something new every day. Next time I want to eat a slightly bitter, nutritionally questionable fern, I'll know exactly where to look.