Obama vowed "not to use signing statements as a way of doing an end run around Congress"; he just did exactly that 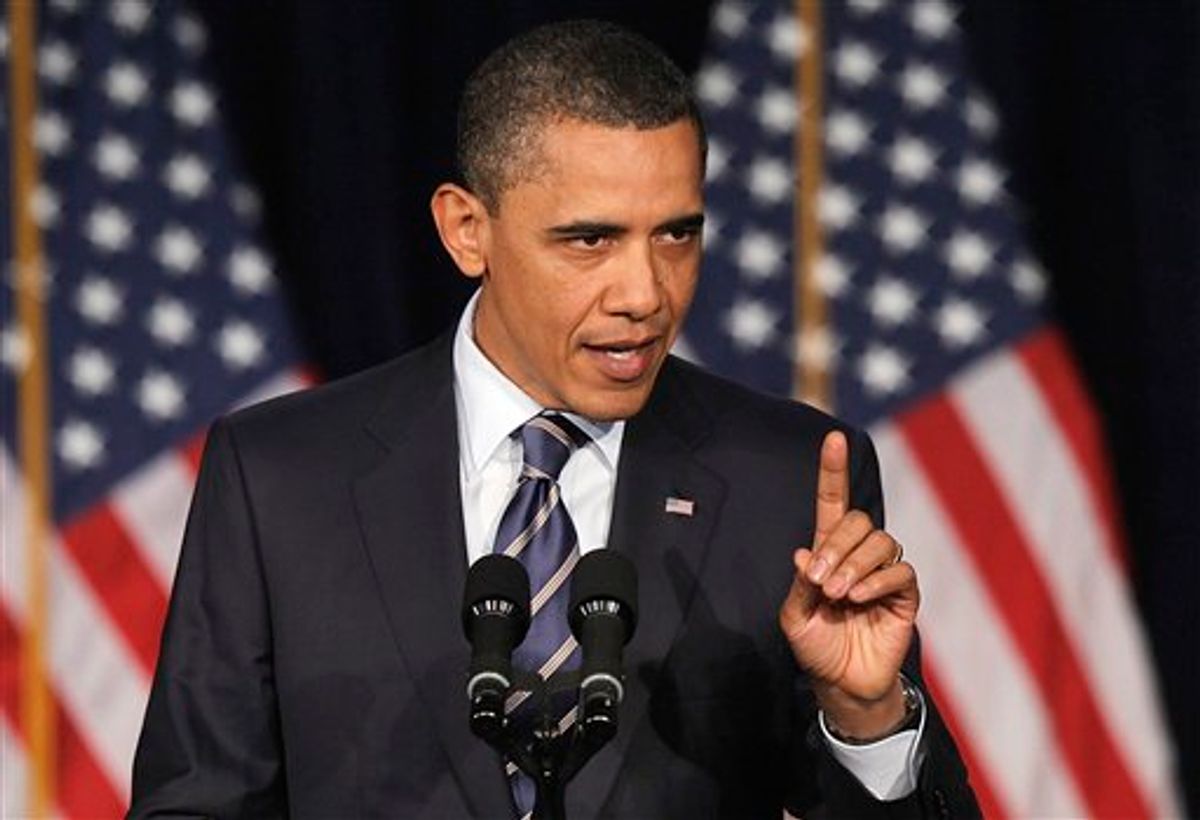 FILE - In this President Barack Obama outlines his fiscal policy during an address at George Washington University in Washington. Obama said in April that he wants to do away with tax breaks to lower the rates and to reduce government borrowing. His proposal would result in $1 trillion in tax increases over the next 12 years. (AP Photo/Charles Dharapak, File) (AP)
--

There's nothing inherently illegitimate about a President's expressing his view on various laws. It's vastly preferable for a President to openly declare his intent to violate the law than to do so secretly. Signing statements themselves are just instruments for conveying constitutional views of the law; whether they're truly odious depends upon the view that is being expressed (what made Bush so radical were the theories of executive omnipotence he embraced, not his use of signing statements to express those views).

And a reasonable argument can be made (though it's not one I share) that a President's duty to uphold the Constitution can sometimes be advanced more by refusing to execute an unconstitutional law than by enforcing it; that view, at least for some, is a critical part of the formal definition of the "unitary theory of the executive" and is something right-wing theorists (and now Obama supporters) have long maintained (I ultimately reject that view because the constitutionally legitimate means for a President to object to an unconstitutional law is to veto it, not violate it; moreover, the power to declare laws unconstitutional lies with courts, not the President). But all of those issues introduce nuance into the question of signing statements that is often lacking in the political discussions they've triggered.

But there was no such nuance present when Barack Obama, during a 2008 campaign rally, made his position known on signing statements.  After being asked by an audience member whether he would "promise" not to use signing statements to override Congressional statutes, he stated simply "yes," and then elaborated as follows:

There is no ambiguity in that vow: none at all. He explicitly promised not to use signing statements to nullify Congressional statutes he thought were invalid. Citing his credentials as a Constitutional Law professor, Obama explained that "Congress' job is to pass legislation," and when that happens, a President has only two options: "the President can veto it or sign it." In contrast to Bush -- who, Obama said, "has been saying 'I can change what Congress passed by attaching a statement saying I don't agree with this part, I'm going to choose to interpret it this way or that way'" -- Obama said he, by contrast, believes "that's not part of [the President's] power." He punctuated his answer as follows: "we're not going to use signing statements as a way of doing an end run around Congress." It just doesn't get any clearer than that.

But on Friday, Obama did exactly that which he vowed in that answer he would never do. When signing the budget bill into law, he attached a signing statement objecting to some provisions as an encroachment on executive power but still vowing to obey them (such as restrictions on transferring Guantanamo detainees), but then explicitly stated that he would ignore the provision of this new law that de-funds his so-called "czars" (which are really little more than glorified presidential advisers). Declaring that the Executive has the unfettered "authority to supervise and oversee the executive branch" -- i.e., asserting another critical aspect of the "unitary theory of the Executive" -- Obama declared that "the executive branch will construe [the de-funding provision] not to abrogate these Presidential prerogatives." In other words, we're going to ignore that mandate because we believe it's unconstitutional:  he's going to use funds for exactly the purpose that Congress, in a bill he signed into law, flatly prohibited.

It is true that there's a reasonable argument to make about the unconstitutionality of that de-funding provision. It's a close call, as Article II does vest the executive power in the President, which presumably includes the power to decide how to structure his team of advisers.  But even the most ardent defenders of executive power have always maintained that Congress' most potent Constitutional power is to de-fund what it dislikes without restriction (even John Yoo -- the ultimate defender of Executive authority -- acknowledged during the Bush years that the Democratic Congress had the power to de-fund the Iraq War and any other Bush policies it disliked: "The fact is, Congress has every power to end the war -- if it really wanted to. It has the power of the purse," Yoo wrote).

But the vow he made in that campaign speech was unambiguous: he said the only two options a President has when faced with a bill is to sign or veto it, and that "we're not going to use signing statements as a way of doing an end run around Congress." Regardless of one's views on signing statements or the "czar" de-funding law, then, there is simply no question that Obama is now asserting exactly the power that, when demagoguing this issue during the campaign, he insisted was illegitimate and he would not exercise. What kind of person would justify that?

It's exactly the same issue as his decision to order U.S. involvement in the attack on Libya without Congressional approval. I firmly believe that a President lacks the authority to order the U.S. to participate in a war without Congressional approval, but many people differ on that. There's a reasonable debate (barely) to be had on that question. But what is 100% clear and indisputable is that Obama, when trying to convince Americans to elect him as President, took the exact opposite position as the one he now maintains. He said in that Boston Globe questionnaire, as clearly as possible, that "the President does not have power under the Constitution to unilaterally authorize a military attack in a situation that does not involve stopping an actual or imminent threat to the nation"; he added that only "in instances of self-defense" would "the President [] be within his constitutional authority to act before advising Congress or seeking its consent."

No minimally honest or rational person can reconcile the President's Friday signing statement with the vow he gave during that campaign event, nor can any such person reconcile his claimed war powers regarding Libya with the view he emphatically expressed during the campaign. And, of course, the list of similar departures from his own claimed views during the campaign is depressingly long: from railing against the evils of habeas corpus denial to fighting to deny habeas review to Bagram detainees; from vowing to protect whistleblowers to waging the most aggressive war in American history against them; from condemning the evils of writing bills via secret meetings with industry lobbyists to writing his health care bill using exactly that process; from insisting that Presidents have no power to detain or even eavesdrop on Americans without due process to asserting the power to assassinate Americans without due process, etc. etc. etc.

It would be one thing if these full-scale reversals were on ancillary issues. But these are fundamental. They're about the powers of that office and the nature of our government. And Obama made these issues the centerpiece of his campaign.  These campaign statements are nothing less than vows made to voters about how he would exercise the power he was seeking if they voted for him.  To insist during the campaign that Presidents have no power to start wars without Congress or to ignore laws the President believes are unconstitutional -- and then do exactly that once he's been vested with that power -- is a form of fraud. And, ironically, it's exactly this behavior that breeds the cynicism that he has repeatedly identified as the central poison in our political culture.  Whatever one thinks about the policies in question on the merits, it should be impossible to defend or justify the radical inconsistency between what he pretended to believe and what he's doing.