Author Stephen Singular on the "unexplained, blind" rage that led to a tragedy two years ago 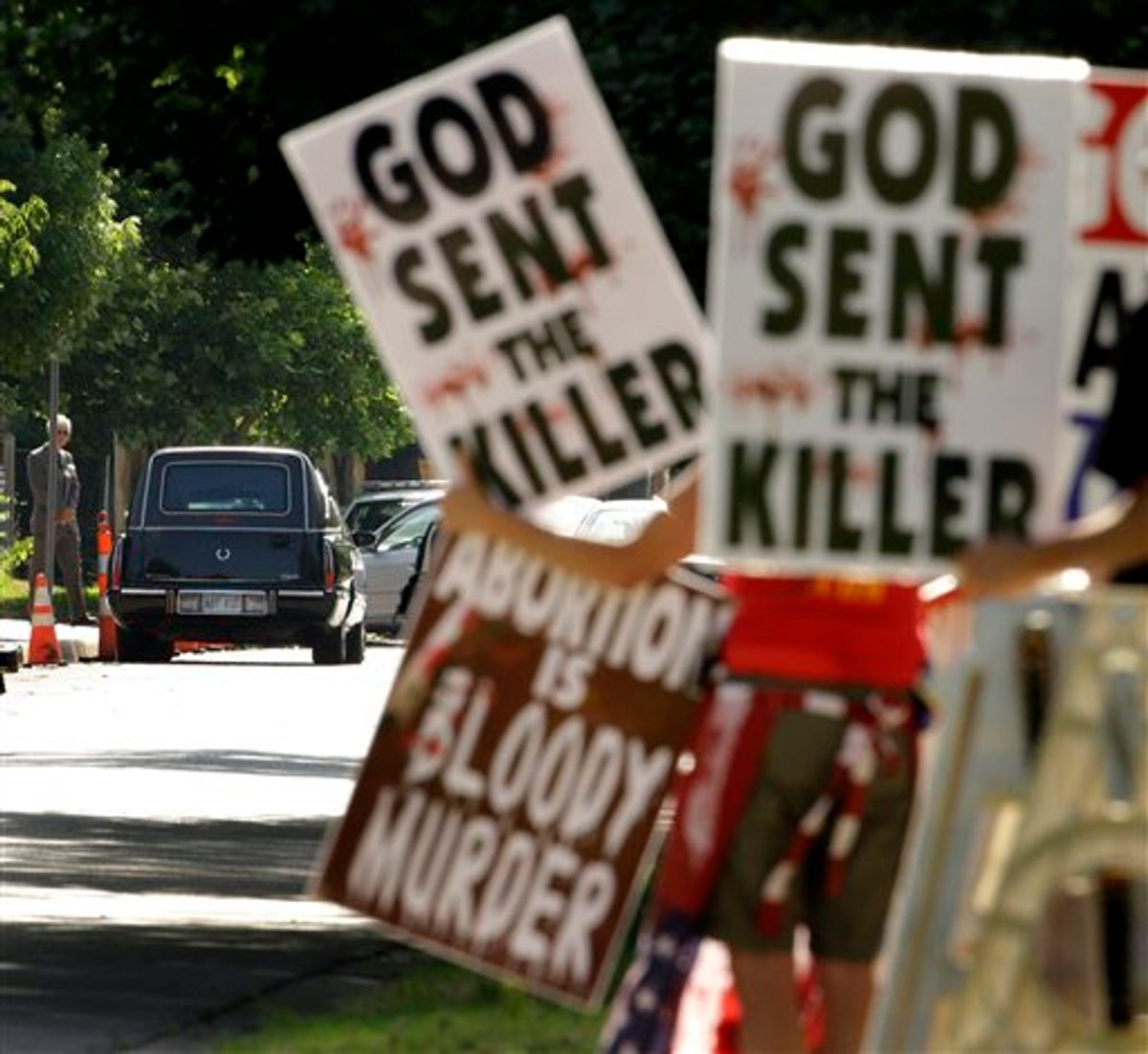 FILE - In this June 6, 2009 file photo, protesters from Rev. Fred Phelps' Westboro Baptist Church demonstrate during funeral services for Dr. George Tiller at College Hill United Methodist Church in Wichita, Kan. In an 8-1 ruling, the U.S. Supreme Court ruled the group's protests were protected by the First Amendment. The father of a Marine killed in Iraq sued after they picketed his son's 2006 funeral service.(AP Photo/Charlie Riedel, File) (AP)
--

It's been almost two years since George Tiller, who was one of the country's few providers of later-term abortions, was gunned down in his church in Wichita, Kan. His brutal murder was followed by a heated national debate over who and what was responsible for it. Tiller's killer, Scott Roeder, was a diagnosed schizophrenic who appears to have acted alone. But anti-abortion activists and several prominent commentators -- most notably Fox News host Bill O'Reilly -- had spent years issuing heated attacks on Tiller for his work. Did their emotionally charged rhetoric -- O'Reilly would ridicule the doctor as "Tiller the baby killer" -- create a climate conducive to Roeder's action?

In his new book, "The Wichita Divide: The Murder of Dr. George Tiller and the Battle Over Abortion," crime journalist Stephen Singular explores these issues -- and concludes that Tiller's murder can only be understood within the context of right-wing extremism that has  become increasingly mainstream. We caught up with him earlier this week:

You've been reporting on right-wing extremist activity since 1987, when you looked into the 1984 murder of talk radio host Alan Berg. How has it changed in the past 25 years?

You know, when I wrote about Alan Berg, I was writing about some very marginalized people. These were a bunch of white guys without jobs, and no money and no prospects and nothing going on; some had been to prison.

And that filters down. It affects everything. It's an emotional atmosphere, and it not only affects the general culture -- think about the people who are at risk in that culture, emotionally, psychologically. [People] who are on edge, like [Dr. Tiller's murderer] Scott Roeder, [who was] diagnosed with schizophrenia as a teenager. Or the man who killed Alan Berg, Bruce Pierce, [who was] clearly mentally unstable. This stuff filters down. And then when the blood hits the wall, and the bullets fly, everyone stands back and says, "Well we never intended that. We were just talking."

You talk a lot about Bill O'Reilly, who demonized Dr. Tiller on his show. Do you consider commentators like O'Reilly to be responsible for the way someone like Roeder might perceive their statements?

I mean, he's absolutely responsible for what he says, but I don't think he's held to any accountability whatsoever. What does he know about the medical complications that women face when they're pregnant and they have a severe problem? What does he know about chromosomal deficiencies? About blood diseases? Has he ever been in an operating room in his life? Does he know anything about this? No. So why should he be in a position of authority to comment on it in any degree of seriousness whatsoever?

I'm not telling him what he can't say. I'm saying that [there's a] total lack of self-awareness that the consequences of it matter... And [that] maybe, if you're going to demonize somebody over and over and over again in the highest levels of the American media, that something unfortunate could come out of that. And then when that something unfortunate happens, where's the sense of ... you know, maybe I was wrong?

As I was reading your book, the extent to which Kansas politicians demonized Tiller surprised me. You write that Attorney General Phill Kline even investigated Dr. Tiller's clinic under false pretenses -- and may have leaked medical documents to O'Reilly.

I've never seen anything like it in my life ... I just kept thinking, no, they didn't do that. They didn't take private women's medical files -- [and] the judge had said, "you cannot show these to anybody, you cannot do this" -- and sneak around [with them] in plastic containers, and put them in cars and apartments, and then allegedly give them to O'Reilly. "You can't show this to anybody." Well let's just show this to O'Reilly, and then broadcast it to 3.5 million people!

And again, where are the consequences? ... [Kline] had a partial ethics hearing in February, and then it was delayed again. It's coming back in the summer. Nobody knows what will happen.

In what other ways was the murder of Dr. Tiller more than just an isolated, violent incident?

What has struck me is that in the last three or four months you've had this incredibly assault -- I mean, on the fringe, a guy kills Tiller, making it harder for some people to get abortions. But in the mainstream, the Republicans have made this one of their main thrusts. Last year there were 600 new pieces of legislation introduced to limit abortion [out of] 34,000. Out of all of the members [of Congress], 45 members are strongly anti-abortion.

And the strangest thing about it to me is that if you just look at this year, we've had just one huge event after another of world importance -- Egypt's revolution, the tsunami, ongoing economic difficulties that could collapse at any moment -- and this is the focus. This is what the Unites States Congress is focused on -- killing Planned Parenthood ... It's a monumental distraction from what's properly the business of government.

You interviewed several of  Tiller's peers -- including his good friend, late-term abortion provider Dr. Warren Hern. Was there something they all seemed to have in common?

Guts. Just guts. I mean they put their lives on the line. You know, we're sitting in Dr. Hern's office, and it's like a fortress. Bars on the windows. Bullet-proof glass. Protesters out front. Tiller's just been shot, and he's [Hern] just said, "Well, I can't drive to work anymore because they'll shoot me." And then he says, "You wanna walk over there and go to lunch?" [Laughs] And I'm like, "maybe we should order in!"

What do you think motivates them?

I think that, as in so many of these wedge issues, it's an abstraction when you oppose [abortion] ... There was an anecdote in there, towards the end of the book, about this couple from the South. They had been anti-abortion protesters, this woman and her friends, and they had stood in front of places and protested. And then she got pregnant and [suffered from medical complications]. So she looked to her friends for compassion, and her friends are like, this is Satanic or something, to do this. Then she came to [Dr. Tiller's clinic in] Wichita, and the compassion was there.

And it wasn't strictly religious based, but they prayed together. They said, "we can do a memorial service for your child, afterwards." And I thought it was very moving. Tiller would do whatever he could to serve his patients.