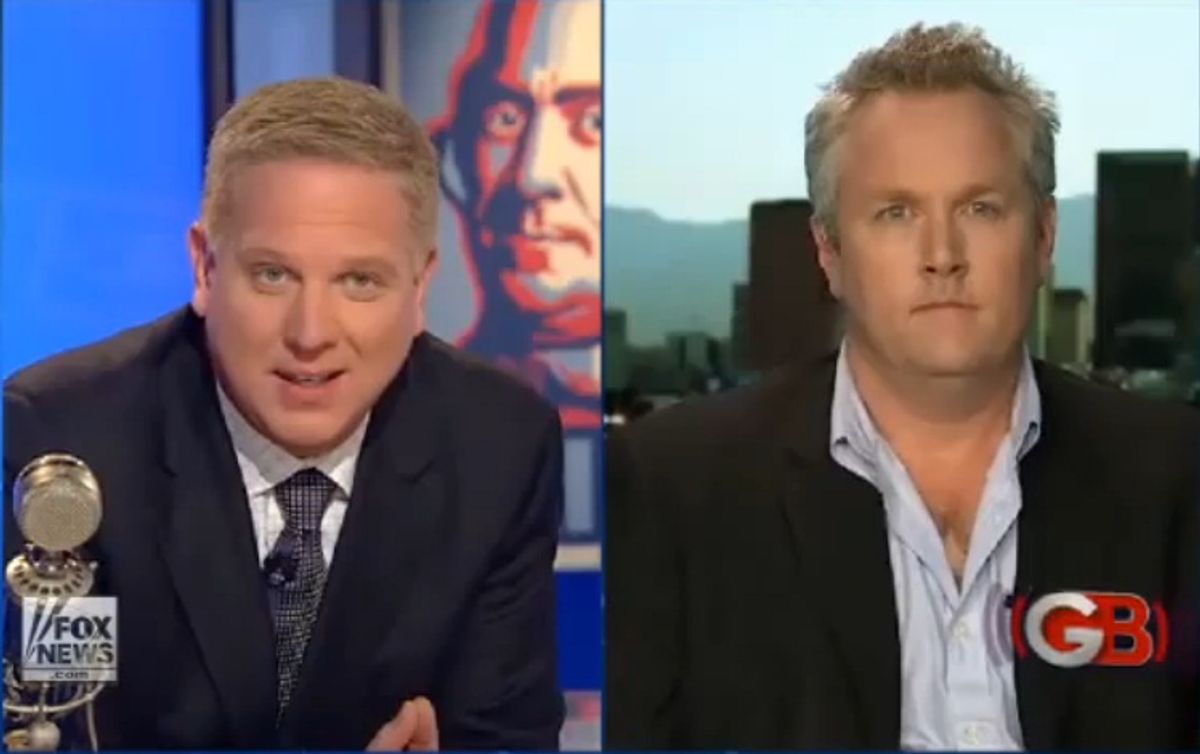 Glenn and Andrew in happier times
--

Evangelical Mormon conspiracy theorist Glenn Beck has become a slightly divisive figure in the conservative movement. He's got a big audience, and he is good at riling them up, but his sheer nuttiness can make everyone else look bad. He's also not really a team player, as he demonstrated last month when his website debunked a hidden camera "sting" video by activist James O'Keefe, protégé of right-wing Web publisher and all-around new media guru Andrew Breitbart. The Blaze's fact-checking was thorough, fair and devastating. In other words, it wasn't the sort of thing one conservative site is supposed to do to another.

While that video -- a supposed exposé of NPR's fundraising practices -- was produced by a regular Breitbart associate, it was first published and promoted by Tucker Carlson's Daily Caller, for reasons unknown (perhaps because it was shoddier than some of O'Keefe's other work, and the Caller, being more desperate for traffic, had slightly lower standards).

Today the Caller accuses Beck of being a serial content thief, with supporting quotes from Mr. Breitbart (and many others):

Over the past several years, Beck has relied on video, audio and written content from others to fill his radio and television shows, as well as his websites. Often he has credited his fellow conservatives for their work. Yet in many other instances say dozens of conservative journalists who spoke to The Daily Caller, he has not, often taking elaborate steps to cloak the origins of the material.

Publisher Andrew Breitbart has seen a number of his stories surface on various Beck media properties over the past few years. While he describes himself as “grateful for the many times he has credited me and my sites,” Breitbart says that “sometimes he also uses other peoples’ work without crediting them, making it appear as though it were his own. But especially since adopting ‘The Truth Has No Agenda’ slogan – and trying to deliberately re-position himself as the pious conscience and judge of many of those he took content from – he has exposed himself to his new motto’s unforgiving standard.”

The story goes on, at length, to make a high crime out of the common cable news practice of using content found on blogs, often without attribution. That is an annoying practice! And it is also one that every single cable news network does, all the time.

The story accuses Beck of playing videos made by bloggers while obscuring the watermark, summarizing research done by bloggers without crediting them, and borrowing story ideas wholesale without credit (or a coveted on-air invite). Victims of his theft, besides Mr. Breitbart, include the Media Research Center (a "watchdog" site that creates videos basically for this purpose, I thought), Pamela Geller, Jihad Watch, Accuracy in Media, and numerous other individual bloggers.

Using material found on the Internet without proper attribution is a detestable corporate media practice. But it's so widespread -- Sean Hannity does it, O'Reilly does it, MSNBC does it, the New York Times does it, even "The Daily Show" does it -- that focusing solely on Beck's actions seems to be missing the larger story. Unless there's some other reason to go after Beck alone. A grudge, maybe? Or the simple fact that unlike other potential targets, he won't be on TV for much longer.

Whatever defensible point the Caller might be making is betrayed by some silliness at the end. It is not particularly scandalous that Beck did not personally come up with his website's motto, especially considering that he apparently hired the person who did. And this line from Mark Levin has absolutely nothing to do with the point of the article:

Beck’s reputation as an ungenerous user of other people’s work has occasionally surfaced in public. Conservative radio host Mark Levin recently took aim at Beck, whom he refers to as the "5-PMer," this way: "You won’t find me putting my name on books that other people write. You’ll never find me doing that," Levin said. "I would never, ever preach to you about principles and viewpoints that I am incapable of writing about. Never."

Levin is clearly attacking Beck's use of ghostwriters on his books. But Beck not only pays his ghostwriters, he also generously credits them. (And Levin's attack is pretty weak: If using ghostwriters is a crime in the right-wing media now, someone ought to inform Rush Limbaugh and Sarah Palin.)

Still, we say shame on Glenn Beck. If you're going to borrow fantastical nonsense from a freak show like Pamela Geller, at least have the courtesy to credit the crazy person you got it from.