Nicolas Cage: Even his arrest is a bore

The actor's one-note acting and over-the-top persona has grown tiresome. It's time for a change 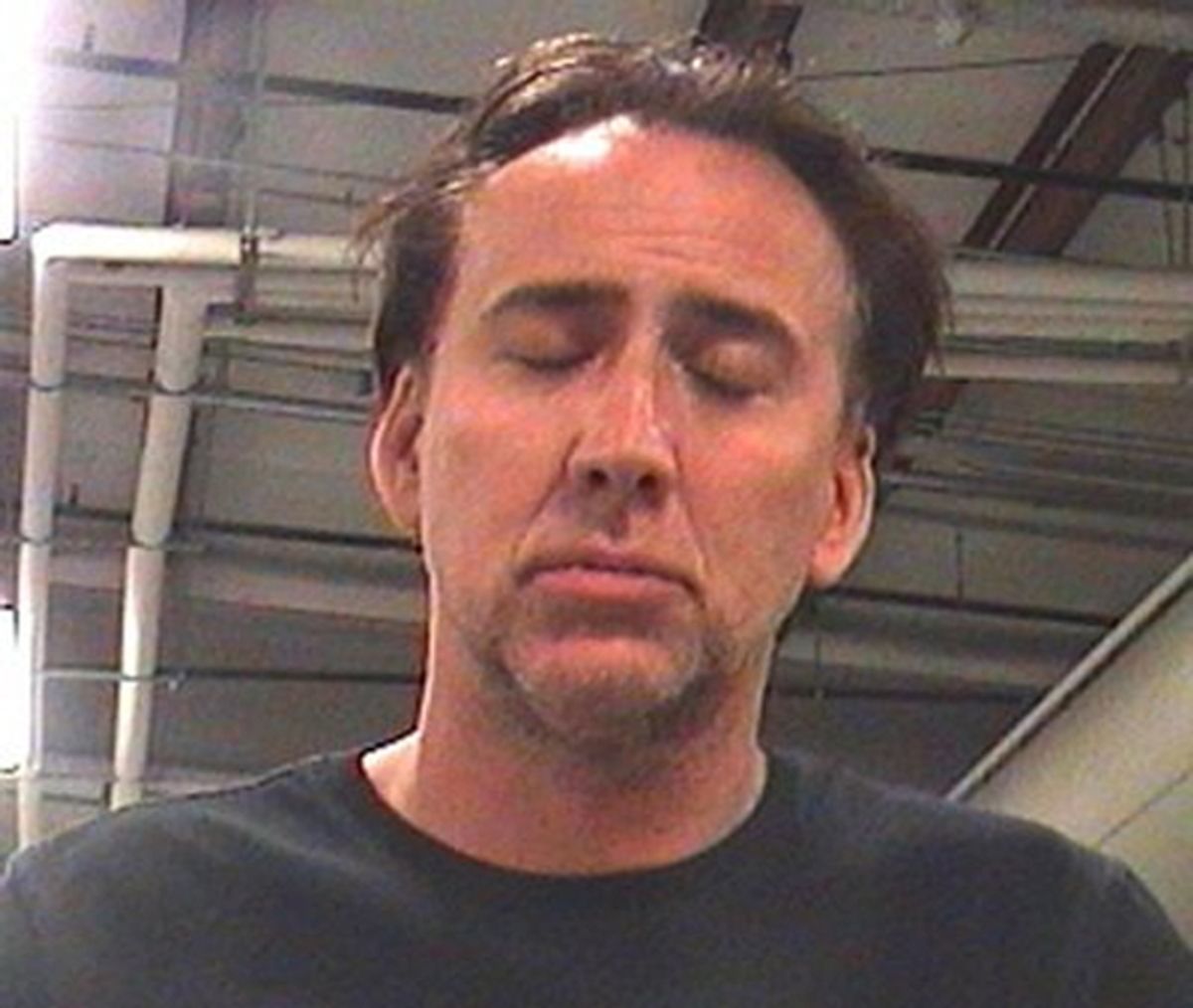 Nicolas Cage's mugshot from this weekend's arrest in New Orleans
--

This weekend, critics and fans have been musing aloud whether the arrest of Nicolas Cage in New Orleans, on charges of domestic abuse and disturbing the peace, will spell the end of his acting career. Relatedly, if you've been paying any attention to Nic Cage's acting career of late, you'd have to conclude Nic Cage has already been doing a fine job of killing Nic Cage's career.

Cage has always been an odd one, even by Hollywood standards. He started his career in smaller roles in his uncle Francis Ford Coppola's "Rumble Fish" and "The Cotton Club," but his real big break was as the irresistibly weird romantic hero of "Valley Girl" -- a part that would set the tone for everything Cage has ever done in its aftermath. In Coppola's "Peggy Sue Got Married," he played Kathleen Turner's goofy high school sweetheart -- and his older washed-up later self -- with an eccentric abandon that polarized critics. But when he followed up, in 1987, with two of his most memorable characters in two of his best films -- as the rooster-haired babynapper H.I. McDunnough in "Raising Arizona" and the romantic, hot-tempered, one-handed Ronny Cammareri in "Moonstruck" -- there seemed a winning method to his unorthodox brand of scenery-chewing.

It was easy to be a little in love with Cage in those days; God knows I was. His broad, physical style gave him an unmistakable presence, and his back-to-back success in instant comedy classics afforded him instant A-list status. And for a while, it seemed to be working for him. I have paid money to see "Vampire's Kiss," "Wild at Heart" and "Honeymoon in Vegas" (though I somehow never got around to "Zandalee"), and have, over the years, periodically found myself heatedly defending his overheated work in all of them. If you ever want to know what it feels like to be a party of one, may I recommend confessing a fondness for "Vampire's Kiss"?

His personal life was, at the same time, equally over the top, with his marriages to Patricia Arquette and Lisa Marie Presley, with his top hat-wearing lizard tattoo, with his obsessions with comic books and Elvis, and his extravagant homes and cars. It seemed for a time that he might just be the coolest nutjob in the world. He picked up accolades and awards for his surreal, fearless performances in "Leaving Las Vegas" and "Adaptation," even as he was already beginning his fierce slide into the realm of eminently pan-worthy crap like "Con Air," "Face Off," and "Snake Eyes." And yes, eternal optimist I am, I have seen them all as well.

For years now, Cage has been parlaying his loose cannon charisma and credibility as an acclaimed actor into an increasingly dreadful body of work. His fans -- and they are still many -- argue that there is a method to Cage's cinematic histrionics, that those who criticize his unorthodox performances miss the bravery of them. But I think Cage is, at this point, the Stella Artois of acting: the thing so terrible and tasteless, people assume it has to be great.

Cage has spent the last decade steadily picking up checks -- and even still, occasional praise for his work. But most of it these days is a roster of bad hairstyles in forgettably awful fare like "Season of the Witch" and "Drive Angry." Sure, plenty of fine actors delve now and then into the just-doing-it-for-the-check realm (see also: 80 percent of Michael Caine's career). And Cage, whose financial woes are rapidly becoming more epic than all three "National Treasures" combined, surely may have additional motivation for his recent choices of work.

But what's galling about Cage is his steadfast, arrogant refusal to grow as an actor. You might argue that nobody ever went to a John Wayne or Humprey Bogart movie expecting to play against type, but at least their types were men. Cage's type is a frozen in the time relic of childish tantrum-throwing -- one that looks more ridiculous with every passing year of the 47-year-old actor's life. He isn't a cool, older badass like Harry Dean Stanton or Harvey Keitel. He's just stunted. He can call it deliberate, claim that he's created a "Nouveau Shamanic" style all his own, but at a certain point -- and that point would be when you've been doing it for about 30 years -- running around and acting like a crazy person just isn't that surprising, challenging or brave anymore. And staggering around doing it drunk in your free time -- also not interesting. Say what you will about Cage's nemesis Sean Penn, at least that guy takes real career risks and still seems to want to create memorable characters, as his funny, touching perfomance in "Milk" proved.

Cage may have given us some great films in his time, but they were arguably already great films, with great directors and casts and scripts, anyway. When was the last time Cage himself elevated the material? When was the last time he did something that wasn't just Cage, doing what he always does? He's now become as obviously false as the CGI that so often threatens to upstage him, a middle-aged man doing a parody of his younger, over-the-top self, like an inside-out version of his Charlie Bodell in "Peggy Sue Got Married." I don't care how much he yells, or how many fireballs are exploding around him at any given moment, for a long time now, Nic Cage has been just plain boring.