Will "brown and beige" people abandon white seniors to poverty? 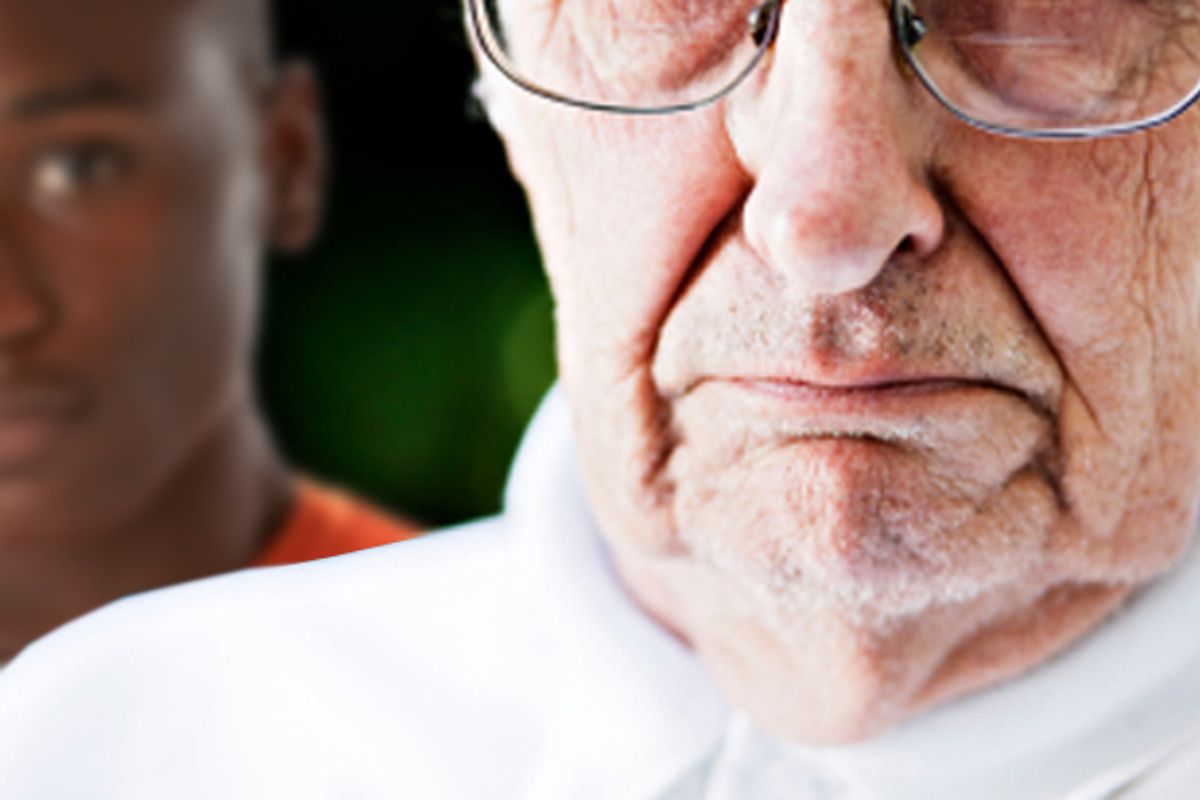 Ross Douthat's New York Times column is often such a dizzying combination of purported rigorous logic and proud conservative bias as to be unreadable. Every once in a while, though, he gives you a scary but important peek into the conservative psyche.

A few months ago, in a column defending the bigoted crusade against the so-called ground zero mosque, Douthat argued that prejudice, not just tolerance, is one of the all-American values that makes this country great, and that, in fact, every once in a while, you need a bracing anti-tolerance backlash to make sure America stays America. Take the anti-Catholic 19th century nativists, Douthat argued. Best known for their violent crusades against Catholic immigrants, mainly the Irish, in which they destroyed convents, churches, homes and businesses, the nativists actually helped Catholics: "Nativist concerns about Catholicism’s illiberal tendencies inspired American Catholics to prod their church toward a recognition of the virtues of democracy, making it possible for generations of immigrants to feel unambiguously Catholic and American." As I wrote at the time, I hadn't realized that the violence of anti-Catholic bigots helped my ancestors feel "unambiguously Catholic and American." Would Douthat someday sketch the Holocaust's bright side for Jews?

I'm still waiting for that one, but Monday's column featured another revealing Douthatism, this one about race. In a piece that purported to explain why we can no longer afford our commitment to the elderly, via Social Security and Medicare, Douthat suggested something the right rarely owns up to: that America's relatively stingy social infrastructure might have something to do with our racial and ethnic diversity. There's a long debate over this issue, and the real unanswered question is no longer whether diversity plays a role in our attitudes toward social spending, but rather, how large a role. But conservatives rarely admit it.

But here's Douthat weighing in on why a Western European social compact, along with higher tax rates, can't work here:

They could have ugly political consequences as well. Historically, the most successful welfare states (think Scandinavia) have depended on ethnic solidarity to sustain their tax-and-transfer programs. But the working-age America of the future will be far more diverse than the retired cohort it’s laboring to support. Asking a population that’s increasingly brown and beige to accept punishing tax rates while white seniors receive roughly $3 in Medicare benefits for every dollar they paid in (the projected ratio in the 2030s) promises to polarize the country along racial as well as generational lines.

There's so much bias wrapped up in that paragraph, it's hard to unpack. Douthat is actually making a point that's similar to something progressives have argued for a while: That white Americans have a stake in the education and employment prospects of non-white young people, because in the more diverse 21st century America, those black, Latino and Asian young people will increasingly be footing the bill for Social Security. I first heard that argument made at a conference on the future of California in 1987. Note how Douthat turns it on its head, though. Those brown and beige people are going to turn on white seniors and refuse to pay the taxes necessary to support them if we keep Social Security and Medicare robust.

It's hard not to notice, especially in California, that our commitment to education has diminished as the proportion of children in our schools has become less white. I'm noticing correlation, not arguing causation, but it's hard not to believe the two things are related. Progressives here have been trying to give older white voters and taxpayers a reason to invest in our multiracial future. Maybe Douthat's message can work to scare conservative whites into investing in the future of all children, but, of course, it's intended to do the opposite: To scare them into believing they can't afford to believe there will be a safety net when they retire, so we might as well dismantle it now.

(Also: Douthat's complaint about the already excessive American tax burden was poorly timed, coming as it did on the day we learned that tax rates for the super-rich have declined dramatically, and our overall tax burden is at its lowest point in decades.)

I think President Obama is smart to begin to talk more about our social compact with one another, as he did in his budget speech last Wednesday. Douthat seems to be saying we can't have a real social compact in a multiracial society; it only works in monochromatic Nordic societies. I think it would be the ultimate example of American exceptionalism to prove him wrong.