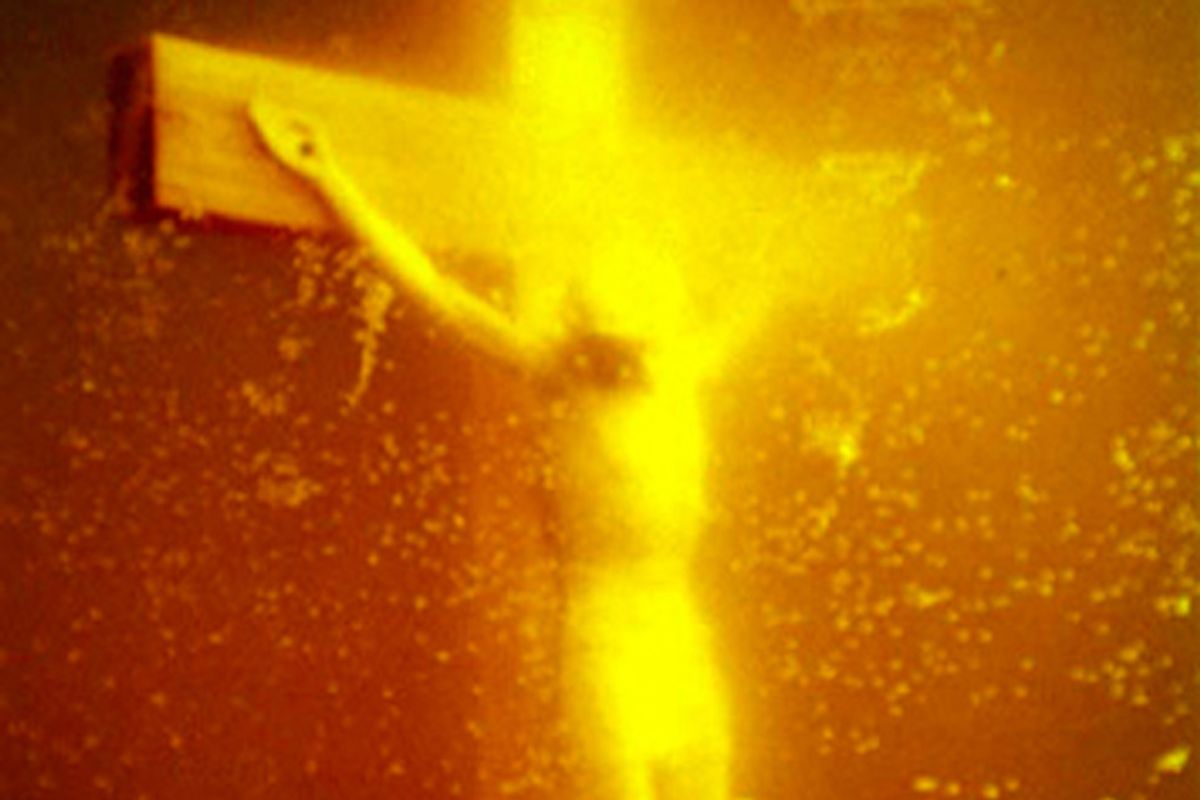 The French really know how to get worked up about art. They'll riot over a ballet; they'll get whipped into a frenzy over impressionism. And this past Palm Sunday a group of Catholic protesters stormed a gallery in Avignon and defaced Andres Serrano's "Piss Christ."

The notorious photograph of a crucifix immersed in the artist's urine has been inciting outrage ever since Serrano unveiled it back in 1987. Thanks to Serrano's modest NEA grant, Jesse Helms was able to use the work as an excuse to froth over public funding for the arts, and it's reliably been trotted out as a shining example of all that's sacrilegious and wicked in art ever since.

The work has been sparking protest ever since it arrived in Avignon earlier this month. Spokesmen for the Collection Lambert said that on Sunday, protesters hacked at it "beyond repair … with the help of a hammer and an object like a screwdriver or pickaxe." They also ruined another Serrano -- a tame image of a nun's hands resting in her lap. The museum says that its staff has also received death threats. Way to ironically celebrate Jesus, there, freaks.

The protest has echoes of the controversy -- and subsequent removal of David Wojnarowicz's video "A Fire in My Belly" from Smithsonian's National Portrait Gallery -- last December because it featured an image of a crucifix covered in ants.

It should go without saying, but here it is: An image of Christ isn't Christ. An artistic comment on religion or idolatry is not an abuse of faith. Serrano, who described himself this week as "profoundly Christian," once said that the work was a critique of the "billion-dollar Christ-for-profit industry." And perhaps that's why the image is so incendiary: It reminds its detractors of the worst aspects of organized religion and its followers, rather than the tenets of the individual who founded it. Nobody's really peeing on Jesus, literalists.

The Collection Lambert has reopened today (it's closed on Mondays) with heightened security. The curators have stated their intention to go on "with the damaged works shown as they are." I'm sure Jesus would be thrilled with how some of his fans are spending their time. It's a terrible loss for contemporary art. But at least now, everybody who wants to know what real blasphemy and defilement look like can go to a museum in Avignon and see for themselves.