The king of Iranian-American flash and trash

The late designer Bijan was a symbol of my fellow Persians' extreme extravagance. Is his death the end of an era? 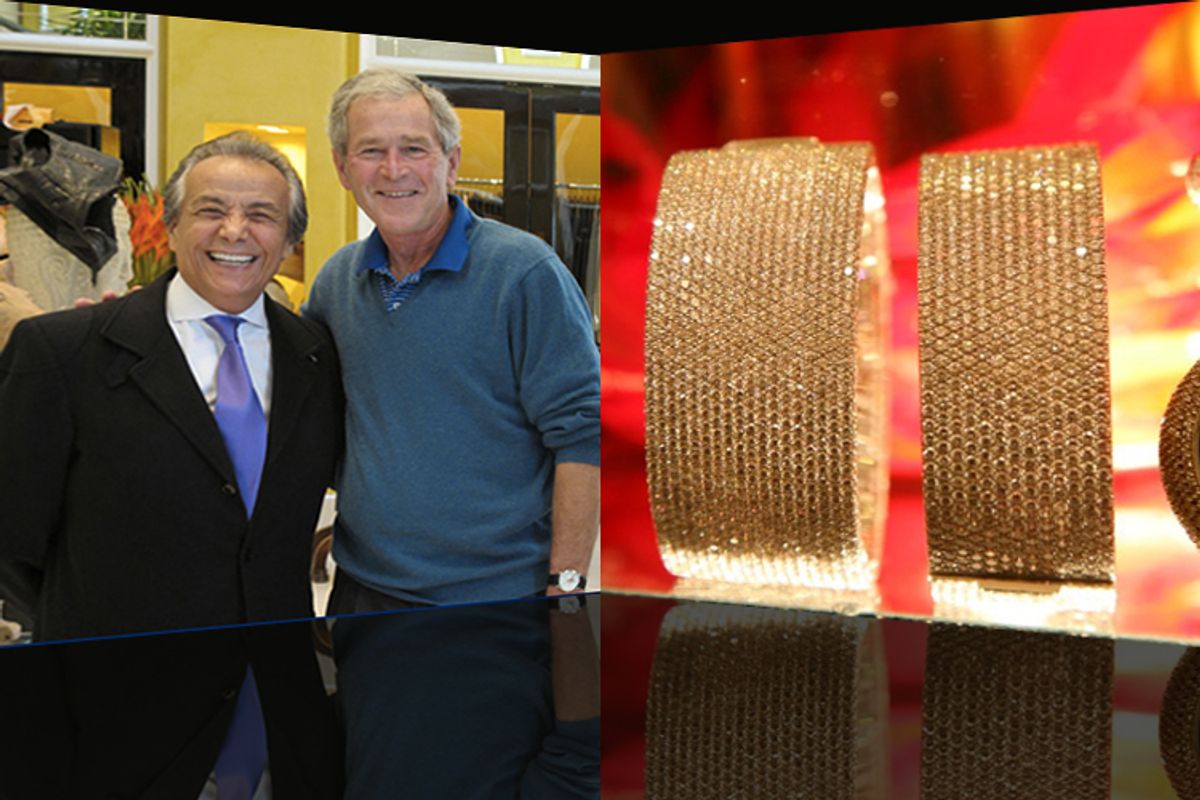 The late Iranian-American designer Bijan with President Bush, left, and one of Bijan's jewelry designs.
--

Once upon a time -- OK, 2005 -- I was a Rodeo Drive shopgirl. I was a college graduate, an MA holder even, and fairly prideless, having been through it all with jobs, from New York nanny work to Baltimore bistro bussing. I even moved back home to Pasadena, Calif., to save money while I worked on a novel that felt like it would never get written.

I had worked in sales many times by then but nothing of this sort -- half the boutique's handbags, made of the skins of species that seemed like they ought to be endangered, cost well over my highest annual income at that point. I was the typical Rodeo Drive shopgirl, overdressed in the required all black, sulking, daydreaming, always lingering at the window with a dust rag, counting all the passersby luckier than I, waiting for the sun to go down when I could lock up and forget all the non-events of the day. During the rare occasion when a customer came in (I was the sole shopgirl at a store that averaged three to six people per day), I'd quickly tell them to come back next week when we'd have a sale -- which we never had -- because I was too anxious to ring up something in the five figures.

Once in a while I amused myself by taking ambitious breaks, usually to the less desirable end of Rodeo, where all the shopgirls belonged, the slums of Jamba Juice, Sprinkles Cupcakes and Le Pain Quotidien. Other times I'd only make it to the window across the street, to that all-yellow store with the matching yellow luxury vehicle propped outside, the one I was forbidden to enter forever.

First: It was appointments only, as the sign on the door demanded. Secondly, it was the House of Bijan -- the flagship store of Iranian-American icon Bijan, designer of jewelry, fragrances and luxury menswear, renowned as the man behind the most expensive store in the world, the pride and joy of my fellow Iranians for its exclusivity. I couldn't go in precisely because of my Iranianness, the wrong kind, the anomaly of anomalies in L.A.: the poor Iranian, that incomprehensible being who either received the cold ignore or flushed pity of rich Iranian ladies who'd nervously fondle my clutches and totes, always mortified at the disgrace of my very existence. (Persian girl, how did this happen to you? a heavily bejeweled elderly Iranian woman, donning what must have been her third or fourth nose, once said to me, as she spotted me sweeping outside the store.)

I was one of many Iranians fascinated by the mess of yellow in and out of the palazzo-inspired $12 million, 35-year-old 90210 landmark. The gilded everything, the obscenely luminous marble floors, the imperious flower arrangements, the Disney-princess sweeping staircase, the mammoth chandelier made of his signature perfume bottles, and of course, the signature yellow Ferrari or Bugatti or Rolls outside, giving you the sense that Bijan lived there. The other notable element inside was the utter emptiness, apparently not a sign of bad business, for once, but evidence that almost no one could afford the place -- the way Bijan liked it. ("I am not a mass designer," he told The Los Angeles Times in 2003. "What was important to me was not to have 2 million clients, like Versace, but to have 20,000 clients.") And so it followed that at any given day, you'd see a flock of my people huddling with cameras outside the store. Nobody was allowed in, but it didn't matter. It wasn't what was inside that was the point, it was all about the surface -- again, just as Bijan would have liked it.

(According to a recent Haute Living article, Bijan admitted there were some exceptions to the appointment-only policy: "Sometimes we can tell by the person if we should break the rule." The writer apparently witnessed a young couple trying to get in, and "Bijan's intuition told him to allow them into his fashion lair. The couple remained in the store until 9:30 p.m., and eventually spent over $600,000 on clothes and jewelry.")

Bijan died Saturday morning, April 16, at Cedars-Sinai Medical Center in Los Angeles after suffering a stroke at, at age 71 (though he had insisted he was 67). Bijan had hit the 20,000 client mark times two, apparently. His yearly revenue was in the billions, he reported. He was known for dressing celebrities from Tom Cruise to Anthony Hopkins, including 36 different presidents all over the world. ("My favorite are the Americans," he coos on his website video; apparently even President Obama was a Bijan-man.) Bijan luxury items range from $1,000 suits all the way to $120,000 chinchilla bedspreads. In the same website video, he gushes, "I happen to be the most expensive clothing designer for the world!" And then he adds, "And I'm sorry for that," sounding anything but sorry.

This is how you imagine the King of Tehrangeles would carry himself. (Tehrangeles is the portmanteau for L.A.'s opulent Little Tehran, specifically the stretch of Westwood Boulevard that flanks the UCLA campus all the way to Beverly Hills, known for its remarkable number of business signs in Persian, Persian Princess denizens on perpetual catwalk, and a ubiquitous soundtrack of Farsi and "Fengilisi" -- the Farsi-English hybrid Iranian-Americans often lapse into.) But even while perched on the pinnacle of rampant excess and unfathomable wealth and gold-plated garishness, all the stuff of a Liberace fever dream that were the emblems of Iranian exile style in the Southern California hub, it seemed sometimes like Bijan was a little bit in on the joke.

Bijan's sense of humor always seemed evident in that gaping half-smirk, half-guffaw he'd brandish on his billboards, like a smile was the essential accessory. His was often featured in his own ad campaigns, especially the ones that strove for controversy with their risqué humor. For example, in 1995, he featured Bo Derek -- in his beloved Bo-braids phase (according to the New York Times, he once had "$20 million worth of diamonds braided into Ms. Derek's hair for a perfume campaign") -- opening up her trench coat against the camera, presumably exposing her infamous body to a comically aghast Bijan and his hand-over-eyes-posing 4-year-old son. Then five years later, inspired by Botero paintings, he used a nude, morbidly obese plus-size model Bella as his mock lover in a campaign that caused many magazines to initially refuse to run it until Talk magazine caved (allegedly because of Tina Brown's friendship with Bijan). Bijan was also known for the ad that hit closer to his old home: a veiled Muslim beauty with the caption: "Jammal, you might as well know the truth ... I'm in love with Bijan." His ads were always filed under '90s "shockvertising" studies, but Bijan was not obsessed with the hip or edgy -- he just loved the larger than life, all that comprised iconhood. His muses were always huge, from Bella to Michael Jordan (whose cologne he put his name on when the two partnered for the successful venture).

Blame this on his sense of humor too: In 1982, he created a gold designer gun. He told Time, "I wanted to make something so American. I wanted to design a gun that people who hate guns would want to have and touch and play with because it's so pretty." The $10,000 limited edition .38 Colt revolver was made of 56 grams of 24-karat gold and sold in a mink pouch with a Baccarat crystal case embossed with the customer's name.

Iranians have always wanted to love him, but it wasn't always easy. My family, distanced at a half-hour and many bank account zeroes from Tehrangeles, had mixed emotions about Bijan. When we'd be out in Westwood for a Saturday kebab lunch, my dad would always excitedly point out his billboards, and then immediately tag on, "Big Bear, so loose!" (A less literal translation: "Grown-ass man, so" -- and loose is pretty impossible to translate but it's a cross between silly, gross, embarrassing, cloying, hideous and precious.) And when his women's fragrance DNA came out in 1993, at a typical mall outing -- all my mother and I ever did together -- observing her reaction to the eau de parfum spray scent was like watching a cycle of daylight to darkness. She'd be wide-eyed and smiling pre-sniff and then would fight to retain the brightness post-sniff, only to finally collapse into a sort of half-disappointment, and, with a final glance at the price tag, pure darkness, and she'd move on and put it behind her entirely.

And yet who can deny some joy for my brethren in the '80s and '90s of a not-terrorist Iranian? Bijan beat Americans at their own game -- he saw the punchline and made it his and won over any potential naysayers with his greatest weapon: the blinding light of flamboyance and ostentation. He embodied American overindulgence to the maximum. He was the creator of Tehrangeles flash-and-trash, which was partially an exuberant succumbing to American capitalism combined with an old-country-gentry national-pride-on-steroids complex. Bijan was monarchy in everlasting exile, the émigré owning his abroad. You needed gold, marble, fountains and columns to carry all that; you needed the brazen optimism of yellow, a shade not unlike the yellow-gold of the Iranian lion, the centerpiece of the pre-Revolution Iranian flag.

Is this the beginning of the end of the Tehrangeleno golden period then? Crossover Iranians, after all, have started to take steps off the pedestal. Cameron Alborzian, early '90s supermodel (most famous as Madonna's plaything in the "Express Yourself" video), is now a yoga teacher. Googoosh, Iran's disco-era Madonna, has a brand-new cosmetics line, and for a limited time is depressingly advertising free caps with any purchase. There is even a website devoted to showcasing the darkest side of Iranian-American assimilation: the monstrous McMansions that have multiplied over the decades in Tehrangeles.

It's hard not to take Bijan's passing as an opportunity to declare the end of an era, as he was the last of a sort of unapologetic breed of obscenely affluent out-of-touch Iranian. Always refusing to be down to earth, one can imagine Bijan is most himself in a yellow and gold eternal up-above -- the campy heaven of harps and cherubs, the afterlife with angels of the Victoria's Secret breed frolicking on clouds, the razzle-dazzle paradise his friend Dame Elizabeth Taylor might be glittering in at this very moment.

Years after my shopgirl stint, over the shit jobs and past the novel's publication, I drove cross-country with a boyfriend. Somewhere in gray rural Tennessee, I saw a giant truck with a familiar image on it: the elegant scrawl and the doughnut-shaped glass bottle. It was a Bijan ad.

I got very, very excited.

Who is Bijan? My boyfriend asked as I took photos.

A designer, I told him. The Iranian-American designer.

I hate it! I said and snapped some more.

But for a second I was that shopgirl again, staring at the signature that was the symbol of Bijan as it sped off in front of us, always many steps ahead in some race I never quite understood, and yet somehow, against all odds, suited for the fabric of even the worst of this country.

Porochista Khakpour, author of the novel "Sons and Other Flammable Objects," contributes personal essays to publications such as The New York Times, The Los Angeles Times, The Daily Beast, among others. She's an Assistant Professor of Creative Writing and Literature at Santa Fe University of Art and Design as well as Fairfield University low-res MFA core faculty.