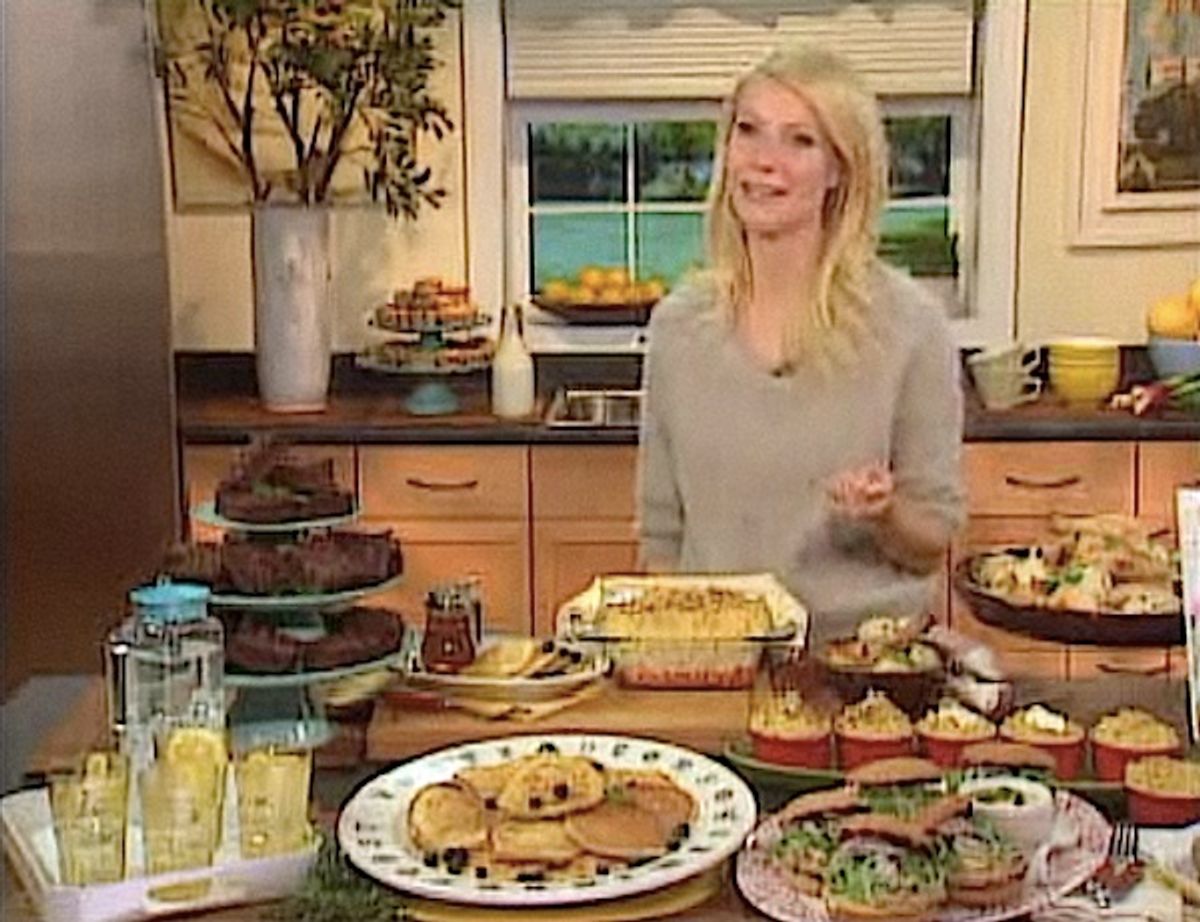 Gwyneth Paltrow, stop it. I am begging you. You are making me look bad in front of all of my friends. Here I go, trying to defend your bourgeois reputation with a (fairly) nice review of your cookbook, calling many of the dishes unpretentious and easy to make.

You must have hated that. I almost can see you, queen-like, reading Salon (as you do every day) in the print form we give to celebrities, reading that article with your lovely eyes widening before crumpling it into a ball and throwing it across the steam room where you are currently enjoying a reflexology massage.

"Get me the New Yorker!" I hear you screaming at your personal assistant/GOOP editor (?)/Chris Martin, "I will teach them who is the most grandiloquent food celebrity of modern culture!"

And congratulations, Gwyneth. You did it. Lizzie Widdicombe's article "Gwyneth’s World: Gwyneth Paltrow, Movie Star and Domestic Goddess"so turgidly describes your latest dinner party with Jay-Z, Michael Stipe, the Seinfelds, Christy Turlington and a bunch of other famous people that I wanted to crumple up my edition of the magazine and throw it across a steam room. But I can't. Because I don't have a steam room, and also I don't have a copy of the New Yorker. Some of us aren't made of crisp, lemon-scented money, Gwyneth!

Anyway, if I had to pick the five most offensive parts of this article (which is difficult because it is short, and also if I say "all of it" then I'm stuck with four blank spaces), it would have to start with the duck sentence.

1. (Seriously, with no context whatsoever):

Michael Stipe added, "Once, a duck she was cooking caught fire, and she threw it in the pool."

"She eats like a truck driver," (Mario Batali) said of Paltrow. He recalled being in Valencia, Spain, and "watching her eat an entire pan of paella as big as a manhole cover."

3. Christy Turlington knows what will happen if she speaks ill against the Paltrow/Martin family:

"They do everything themselves, including the killing of the lobster," she said. "It’s not the boiling-in-the-pot-and-screaming lobster thing. It’s a different, faster approach. I could never do it."

"You smack it against a tree or something?" Batali asked.

"You stick a knife through the head," said Turlington, who seemed suddenly troubled.

4. Why would anyone give quotes like this to the press?

Wendi Murdoch, sitting nearby, had said that she is a reader of Paltrow’s blog: "Only one thing comes to mind -- healthy and organic." She listed her favorite recipes: "Pumpkin soup, grilled market vegetables. It’s good. I get my chef to cook it."

"But you’re directing the chef," Kelly Behun, a friend of Murdoch’s, interjected.

5. And, of course, no party at Gwyneth Paltrow's is complete without the slavish groveling:

Jessica Seinfeld made a toast ... she turned to the assembled guests. "And you are all so lucky to be part of Gwyneth’s world. Because this is the real deal. And she’s invited all of you good people in here. I would never do that."