Scott Adams defends his self-congratulatory commenting and weighs in on the Obama chimp controversy. Make it stop 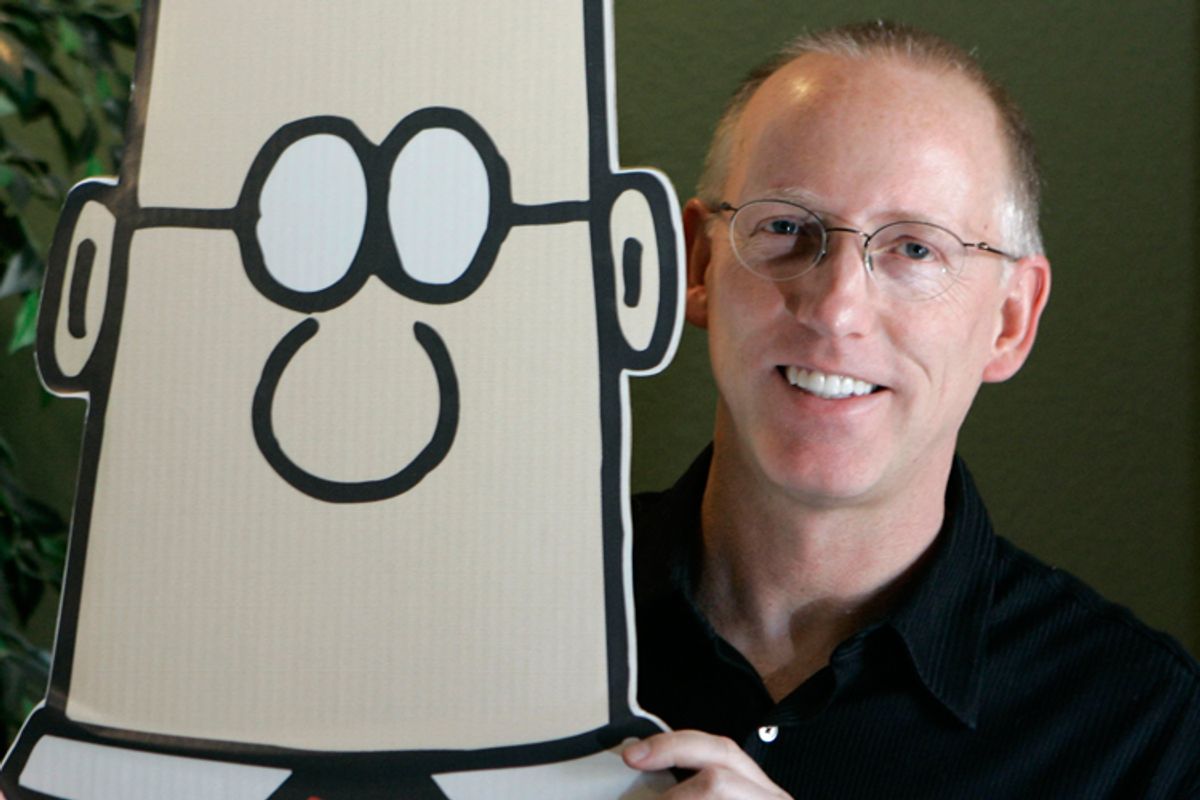 When commenters on MetaFilter started ragging on a recent Wall Street Journal story by Scott Adams, the Dilbert creator and sexist jackass who last month opined that "women are treated differently by society for exactly the same reason that children and the mentally handicapped are treated differently," one user, "plannedchaos," leapt to his defense. "He has a certified genius I.Q., and that's hard to hide," noted plannedchaos, who went on to ask, "Is it Adams' enormous success at self-promotion that makes you jealous and angry?"

Mr. Chaos has apparently long been a fan of Adams; Gawker noted Monday that early this year, he was posting on Reddit that "It's fair to say you disagree with Adams. But you can't rule out the hypothesis that you're too dumb to understand what he's saying. And he's a certified genius." How fortunate for Adams there are people in the world not "too dumb" to understand the certified genius. It just happens that they're all Scott Adams. On Friday, the cartoonist admitted on MetaFilter that he and plannedchaos are one and the same.  My tie! It's curving upward in astonishment!

Adams didn't invent the art of defensively conversing with or about oneself on the Internet – the practice of sock puppetry has a long and ignoble history. Five years ago, New Republic scribe Lee Siegel was suspended after the revelation that he'd been posting on his blog's forums as "sprezzatura," a fan who opined that "Siegel is brave, brilliant, and wittier than [Jon] Stewart will ever be. Take that, you bunch of immature, abusive sheep," and told another poster who'd questioned his identity flat out that "I'm not Lee Siegel, you imbecile." And in 2007, Whole Foods' chief executive John Mackey, celebrated advocate of truth in labeling, was revealed to have spent eight years hiding behind a fake identity on Yahoo boards to disparage competitors, promote his company's stock, and even praise his own alleged good looks. His alter ego, Rahodeb, once took the time to note, "I like Mackey’s haircut. I think he looks cute!"

In Adams' case, his exposure as a self-aggrandizing Internet troll who enjoys talking about himself in the third person brought no apologies or admissions of shame. He instead rationalized his stunt, pouting to the MetaFilter community, "I'm sorry I peed in your cesspool," and adding, "smart people were on to me after the first post. That made it funnier." Ah, yes, like when he posted, "I hate Adams for his success too," when he really was that awesome, successful Scott Adams in disguise -- hilarious! It's like when Lois Lane gets all worked up about Superman, and Clark Kent is just standing around like, awww yeaaaah.

Adams further countered on Monday with a fabulously self-congratulatory blog post account of his actions, explaining, "Conflict of interest is like a prison that locks in both the truth and the lies. One workaround for that problem is to change the messenger. That's where an alias comes in handy. When you remove the appearance of conflict of interest, it allows others to listen to the evidence without judging." Oh, it was about the evidence! The evidence that, as plannedchaos wrote, "Everyone on this page is talking about him, researching him, and obsessing about him" -- especially plannedchaos. Adams also draws parallels between his situation and that of Orange County Republican Party central committee member Marilyn Davenport, who has been attacked for forwarding an email with Obama's head Photoshopped onto a chimp. (Both she and Adams, he argues, were victim of the Internet's lack of "context.")

Adams' extraordinary hubris -- which he justifies by reminding us of his "twenty year career of daily self-deprecation" -- is surpassed only by his remarkable ability to remain ethics-proof. "When my spunky alter ego weighs in, people generally focus on the facts presented," he wrote. "The masked vigilante worked very well until recently. And I'd be lying if I said it wasn't fun." Well, we wouldn't want you to have to lie about anything, Scott Adams. Unless it's about how great you are.

Anyone can be anyone on the Internet, and for many, anonymity offers a freedom and safety necessary for self-expression. But when someone deliberately misrepresents himself, because he claims his own adoring "invisible friend" is an "unbiased messenger," when he lies about who he is because it's "fun" playing the "vigilante," it's a profound statement of cynicism about the nature of online community and contempt for his readers. Adams is right when he says his actions were funny, but I doubt he meant they were so funny-strange, instead of funny-ha-ha. He did, however, get one thing right in all of this. Writing on the nature of his little sock puppet, he said Monday, "A hammer can be used to build a porch or it can used to crush your neighbor's skull. Don't hate the tool." Whether you're hated now for your ego and dishonesty is up for grabs, Scott Adams. But I'm glad we can all agree you're a total tool.