Lessons from Manning's transfer out of Quantico

It's no reason for a victory lap, but this new development offers a lesson in successful activism 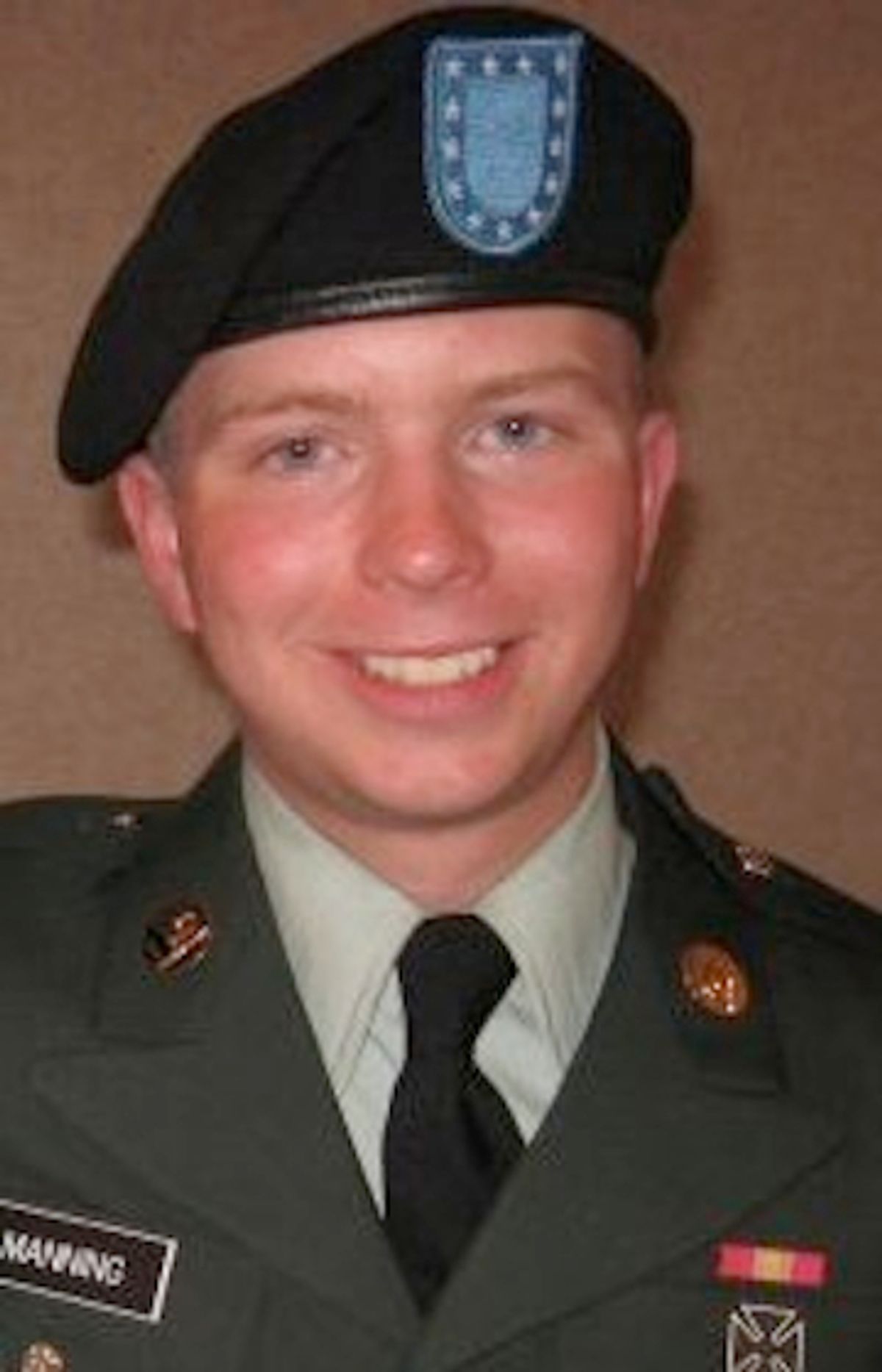 A Pentagon official yesterday leaked word to the Associated Press that accused WikiLeaks leaker Bradley Manning was being transferred out of the Quantico Marine brig where he has been held under inhumane conditions for 10 months, and moved to the Army's prison facility in Ft. Leavenworth, Kansas. The Pentagon did not even bother to notify Manning's lawyer of the transfer; he had to learn of it through the media leak. As most media reports on this transfer note, the move takes place "in the wake of international criticism about his treatment." In particular, the AP story explains:

Manning's move to a new detention center comes about a week after a U.N. torture investigator complained that he was denied a request to make an unmonitored visit to Manning. . . . Two days later, a committee of Germany's parliament protested about Manning's treatment to the White House. And Amnesty International has said Manning's treatment may violate his human rights [ed.: actually, the Amnesty condemnation was far more emphatic than that].

Additionally, the British government formally raised concerns with the U.S. over the treatment of Manning (whose mother is a British citizen). State Department reporters had begun aggressively questioning officials about their refusal to allow unmonitored U.N. access to Manning (after all, even the Bush administration allowed unmonitored visits by human rights organizations to accused top Al Qaeda Terrorists held at Guantanamo).

Combine all that with the compelled "resignation" of State Department spokesman P.J. Crowley for his public denunciation of Manning's treatment -- and the forced defense by President Obama of this treatment when he was asked about it in a Press Conference by ABC News' Jake Tapper -- and it's obvious that this has exploded into a serious political and international scandal for the Obama administration. Add on to all that the fact that Manning's counsel was preparing to file a habeas corpus petition after brig officials just ruled that they would indefinitely continue Manning's oppressive treatment against the advice of the brig's psychiatric experts, and it's not difficult to see why this transfer was politically necessary.

How Manning will be treated in Ft. Leavenworth remains to be seen, and it's impossible to know the psychological injuries that have already been inflicted on him by 10 months of inhumane detention. NBC News' Jim Miklaszewski claims that "he'll be placed in a new medium-security facility," and will "have some freedom of movement in an open day room, have contact and take meals with fellow prisoners, shower when he wants and have access to books and TV" and "have three hours a day of recreation time." If that happens, that will be a positive development, but what's particularly interesting about Miklaszewski's report is how extensively some military and government officials acknowledge wrongdoing (anonymously, of course, lest they meet Crowley's fate):

Manning was held in maximum security at the Marine Corps brig Quantico, Va., for more than eight months where he spent 23 hours a day and ate all his meals in an isolated cell, was permitted no contact with other prisoners, and was forced to wear chains and leg irons any time he was moved. He also was often forced to strip naked at night and stand nude in his cell for early morning inspection.

The Marines claim they took his clothes to prevent him from injuring himself. Military and Pentagon officials insist the action was punishment for what the Marines considered disrespect from Manning. Such tactics for disciplinary reasons are against military regulations. . . . U.S. military officials, who spoke to NBC News on condition of anonymity, deny Manning was tortured, but one said "the Marines blew it" in terms of how they treated him.

For multiple reasons, the treatment of Manning has been a profound stain on the Obama administration. It isn't merely that the treatment is inherently inhumane, although that's true. It isn't merely that oppressive detention conditions are such a glaring betrayal of Obama's repeated signature vow to end detainee abuse, though that's also true. And it isn't merely that Manning has never been convicted of anything, rendering this obvious punishment (masquerading as protective detention) offensive on multiple Constitutional and ethical levels (not to mention a violation of the UCMJ), though that, too, is true. What makes it most odious are the purposes that likely drove it: a desire to break Manning in order to extract incriminating statements to be used against WikiLeaks and, worst of all, a thuggishly threatening message to future would-be whistleblowers about the unconstrained punishment they'd face if they, too, exposed government deceit, wrongdoing and illegality.

But there is one positive aspect of all of this worth highlighting: namely, the mechanisms used to catapult this story into such prominence. Had this been 10 or even 5 years ago, I'm convinced that Bradley Manning's oppressive detention conditions would never have received any substantial attention and he'd wither away indefinitely in Quantico. Major media outlets would evince little interest in the conditions of an accused Army leaker. Republicans have long made clear their support for detainee abuse, and given that it's being carried out by a Democratic President, very few officials in the President's party would care either. It's long been the case that the only stories capable of generating any real media interest are ones raised by the leadership of one of the two parties, and Bradley Manning's detention conditions is of interest to neither.

But that landscape has changed, one could say fundamentally. The story of Manning's inhumane detention conditions was first reported here in this space on December 15, when I wrote the following in the first paragraph:

Bradley Manning, the 22-year-old U.S. Army Private accused of leaking classified documents to WikiLeaks, has never been convicted of that crime, nor of any other crime. Despite that, he has been detained at the U.S. Marine brig in Quantico, Virginia for five months -- and for two months before that in a military jail in Kuwait -- under conditions that constitute cruel and inhumane treatment and, by the standards of many nations, even torture. Interviews with several people directly familiar with the conditions of Manning's detention, ultimately including a Quantico brig official (Lt. Brian Villiard) who confirmed much of what they conveyed, establishes that the accused leaker is subjected to detention conditions likely to create long-term psychological injuries.

From there, blogs that barely existed even five years ago -- such as FDL -- coordinated a highly effective activism campaign to publicize and protest these conditions. Blog readers complained en masse to the U.N. and Amnesty International, which led to a formal investigation by the former and a formal condemnation and protest campaign from the latter. A few isolated media figures and politicians -- who regularly read blogs -- picked up the cause, with MSNBC's Dylan Ratigan providing ample coverage and Dennis Kucinich demanding official access to Manning and loudly complaining when it was denied (along with constant coverage from The Guardian). Rather than rely on the mediation of establishment journalists and editors, Manning's counsel largely confined his public commentary to his own newly-created blog, where he was able to control the content, avoid distorting editing practices, and be heard in full.

Substantial Internet-organized protests took place outside of the brig and elsewhere around the country -- aided by the vocal support of the classic heroic whistle-blower, Daniel Ellsberg, who was arrested protesting Manning's conditions -- bringing further attention to Manning's plight. Blog-reading and blog-writing law professors organized an eloquent but harsh condemnation of Manning's detention supported by 250 of the nation's preeminent scholars.  And the ultimate tipping point for the story -- Crowley's condemnation -- came not when he was asked about Manning at the daily State Department briefing he gave for establishment reporters, but rather at a small group of Internet activists and social media writers when he was confronted with an aggressive question about "Manning's torture" from a Ph.D student at MIT.

But perhaps most significant is how the scandal finally seeped into full-scale establishment media focus. Even five years ago, most establishment journalists took their cues exclusively from a small handful of homogenized outlets (such as the Drudge Report), but now many of them (the smartest and most resourceful ones) use a much more extensive and diversified roster of sources, such as blogs, Twitter, and independent political commentators. That caused one of the leading media practitioners of this new method (Jake Tapper) to ask President Obama about Crowley's denunciation of Manning at a nationally televised Press Conference, elevating the story to the presidential level, leading to Crowley's resignation (and commendable ongoing condemnation of Manning's treatment), and ultimately to the forced transfer of Manning out of Quantico.

The point here is not to take any victory lap; none is warranted given Manning's ongoing detention under still-unknown conditions as well as the injuries he's unquestionably suffered already (his counsel says that, despite the transfer, he "nonetheless intends to pursue redress at the appropriate time for the flagrant violations of [Manning's] constitutional rights by the Quantico confinement facility"). But this episode should be a potent antidote to defeatism, as it provides a template for how issues that would be otherwise ignored can be amplified by independent voices creatively using the democratizing and organizing power of the Internet, and meaningful activism achieved.

I'll be on MSNBC this morning, at 11:40 a.m., discussing the opressive impact of the Defense of Marriage Act on binational same-sex couples, as highlighted by the Out Magazine profile I noted yesterday.