Could the Happy Meal become extinct? 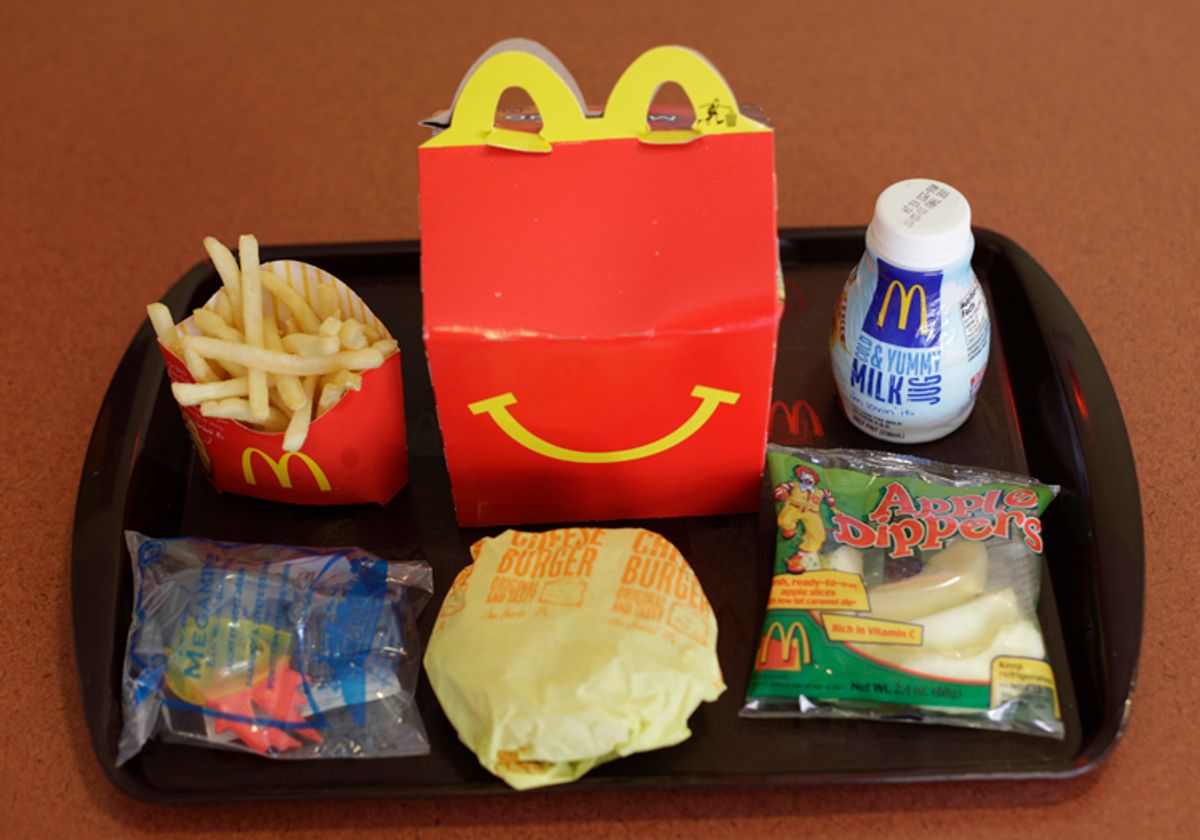 Shown is a Happy Meal at a McDonald's restaurant in San Francisco, Monday, Nov. 8, 2010. In the left foreground is a character toy included with the meal from the movie Megamind. It is a happy moment for people who see the Happy Meal as anything but. San Francisco is poised to become the first major American city to require fast-food restaurants to sell meals that meet set nutritional guidelines or not include a toy with them. (AP Photo/Eric Risberg) (Eric Risberg)
--

Could one of the largest toy distributors in the world be run out of business by a California mom? In a lawsuit that McDonald's filed to have dismissed this week, mother of two Monet Parham has charged that the chain's Happy Meals violate California consumer protection laws, and looked to stop them from containing those kid-enticing toys. Think it's crazy that Zoobles and Batman figures couldn't ever go the way of Joe Camel? Think again -- San Francisco banned Happy Meals with toys last year, prohibiting them in meals that exceed certain levels of fat, calories and sodium. And New York is now readying for a similar proposal. Mayor McCheese could not be reached for comment.

Plenty of parents are familiar with the challenges that Parham, who is represented by the Center for Science in the Public Interest, faces on a regular basis. She told the L.A. Times last year that though she tries to limit her children's consumption of McDonald's to once a month, the kids -- then 2 and 6 -- were at a fever pitch of acquisitive toy lust when McDonald's rolled out its "Shrek" series last summer. "Needless to say," she said, "my answer was no. And as usual, pouting ensued and a little bit of a disagreement between us. This doesn't stop with one request. It's truly a litany of requests." Pouting and incessant demands from little kids? That's not just that Fiona action figure's fault.

McDonald's certainly has a valid point in its claim that Parham "was not misled by any advertising, nor did she rely on any information from McDonald's," and even in its assertion that the suit could open up a huge can of legal worms for anyone else who markets to children. The financial stakes for McDonald's are huge, which is no doubt why, in the wake of the San Francisco toy ban, Arizona and Florida both moved quickly to enact a ban on, uh, bans of incentives like toys, coupons and even crayons. Can't interrupt the precious free enterprise system.

One might argue that she who has never dug around for the prize in a box of Cracker Jack should cast the first stone, and the bottom line is that parents do exercise ultimate veto power. As Peggy Orenstein points out eloquently in "Cinderella Ate My Daughter," it's not kindergartners whose dollars are underwriting junk culture – it's Mom and Dad. Most of us who are trying to raise our kids in a healthy, less consumer-obsessed manner have had to suck up a lot of tears and tantrums along the way, along with occasional bouts of caving. But let's face it, McDonald's, like every other company like Burger King and Taco Bell that packs a tantalizing treat next to a nutritionally vacant meal, is making major bank on feeding cheap crap to your kids -- and insidiously getting your kids to demand you do it. A cheeseburger, fries and low-fat chocolate milk Happy Meal packs an angioplasty-courting 700 calories and 1,060 milligrams of sodium. There ought to be a law.

The practice of luring families to make suspect choices based on convenience, the promise of a new plastic animal, youthful whining and parental guilt is so deeply embedded in our culture, so much a part of childhood, that the idea it could ever change seems almost unfathomable. Yet it may one day be regarded as cavalier and irresponsible as marketing cartoon camels to sell cigarettes. Fortunately, law or no law, consumers always have the option of voting with their wallets -- and the tantrums seem a small price to pay if you don't fancy supporting a business you believe doesn't have your children's interest at heart. But while parental authority is vital, laws protecting children from predatory practices aren't such a bad idea either. Freedom of choice and responsible regulation can coexist just fine. And with childhood obesity continuing to skyrocket, the fight over what's so happy about heart disease and Type II diabetes is just beginning.