The 8 most awkward, cringe-inducing attempts at comedy from Tim Pawlenty and Mitt Romney 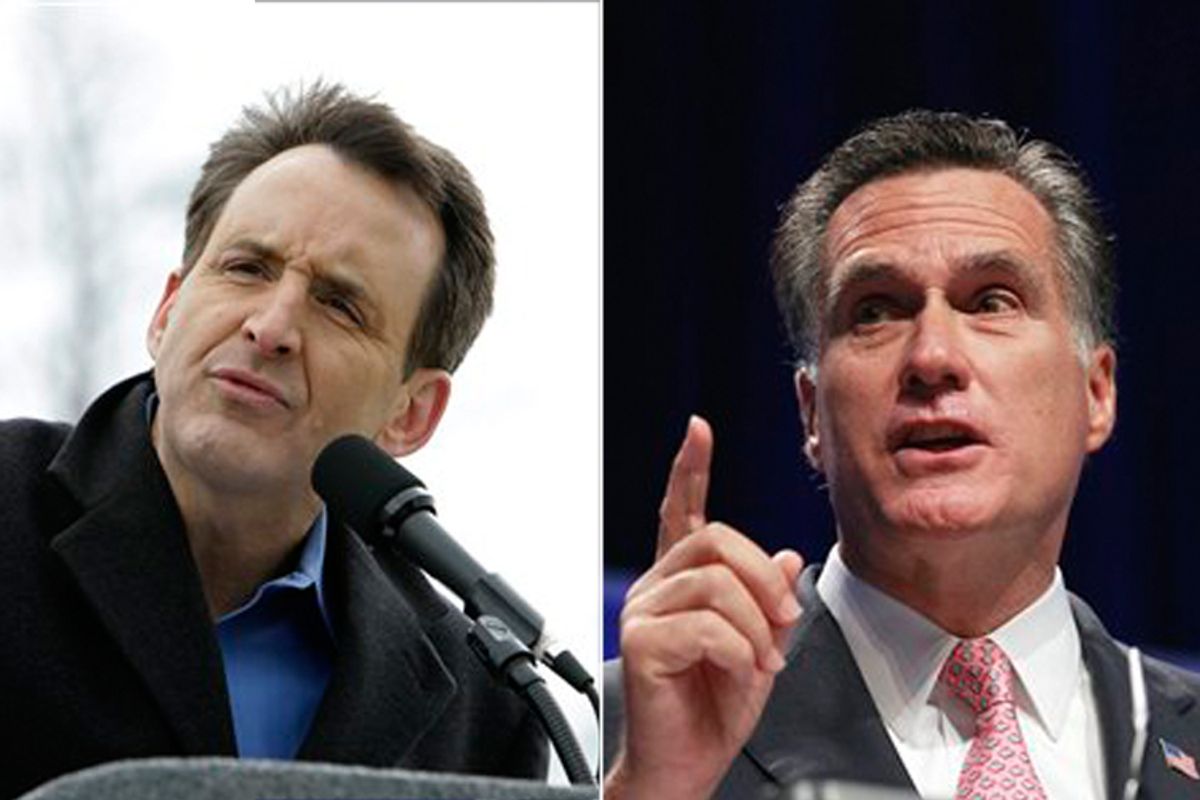 The worst part of any presidential campaign is actually listening to the candidates. They drone on, endlessly, repeating the same talking points in the same stump speeches, for months. Many of them are very poor public speakers. Most of them, actually. And then, there are their jokes.

Not all of the potential presidential candidates tell bad jokes. I don't think Ron Paul tells any jokes (the rEVOLution is nothing to laugh at!), thank god. Mike Huckabee is actually charming and funny, with a natural sense of timing, as you can see in this clip from a 2004 Republican Governors Association meeting, in which he does a passable God-themed Bob Newhart telephone routine. (But sometimes his ad-libs are a bit questionable! And other times the p.c, police can't handle some harmless gun violence-themed campaign humor.)

Here is Tim Pawlenty telling a funny joke about America hitting Barack Obama's car with golf clubs, or something:

More recently, Pawlenty attempted to tell a series of "topical" jokes about the Lady Gaga and the Justin Bieber that the kids are so into these days:

When Pawlenty is off-script is when his wit truly shines. Just watch him attempt "banter" on Fox & Friends:

Yes, "tubing in the polls." Very funny. Makes a lot of sense, as a joke.

Tim Pawlenty also likes to talk about his "red-hot smoking wife." Unfortunately, while she may be hot, she also refuses to have sex with him:

That is a very good joke and not at all just an incredibly weird thing for a presidential candidate to say.

Speaking of normal human behavior, pander-bot Mitt Romney has sampled what you Earth creatures call "humor" as well. He is not very good at it. But, admirably, he tries very hard. He has told so, so many jokes. This is a joke about Mitt Romney trying to win a sheep, I think. I don't actually get it:

Here is Mitt Romney telling like three jokes. He starts with one right from his "jokes for public speaking" book and then spends like three minutes setting up a very lukewarm baseball joke. (And then he tells one of those popular jokes about how his wife would rather have sex with someone else. Republicans: Their hot wives are not attracted to them, am I right?)

Romney has even tried some non-wife-related self-deprecating humor:

Of course, the only genuinely funny thing Mitt Romney has ever said/done was this: