The industry spent $146.5 million on federal lobbying. Is it any wonder Congress adopted no new laws? 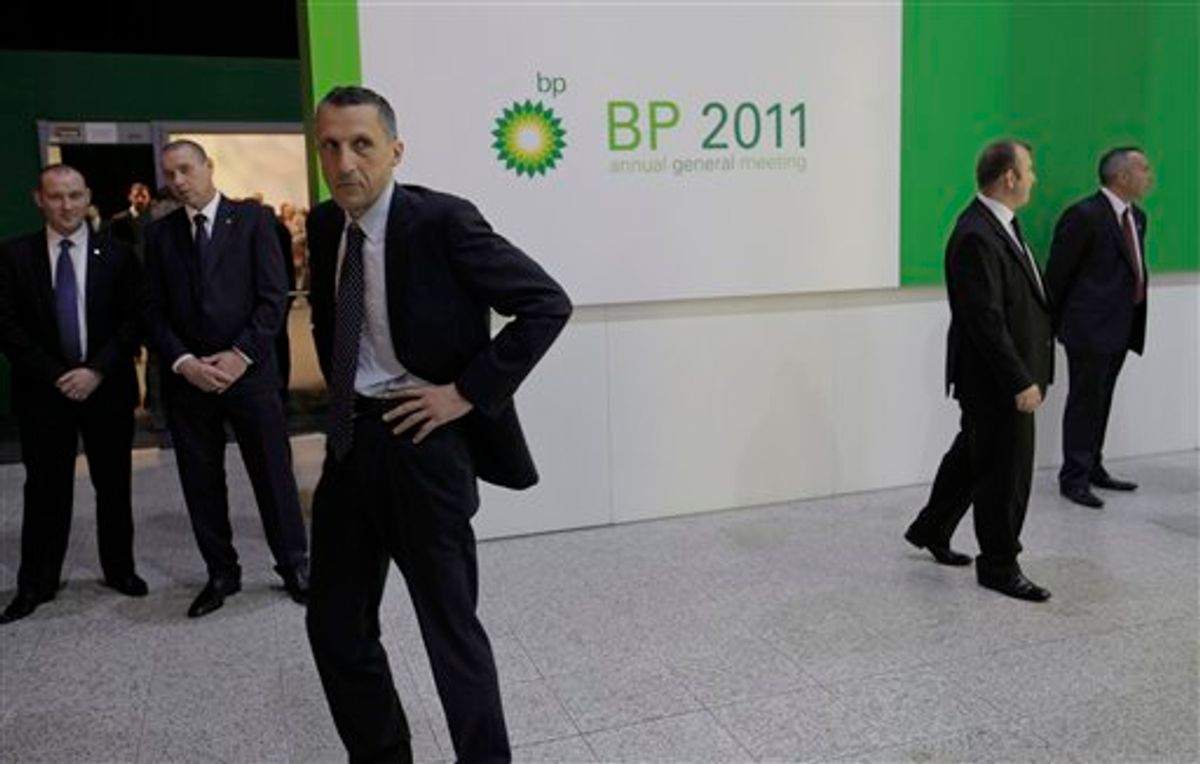 Security personnel guard the entrance to the conference center where BP held its annual general meeting of its shareholders, in London, Thursday, April 14, 2011. BP's annual shareholder meeting got off to a rowdy start on Thursday as crowds of protesters watched over by police held noisy demonstrations outside the venue.(AP Photo/Lefteris Pitarakis) (AP)
--

On the one-year anniversary of the explosion at BP’s Macondo well, media outlets have spilled a fair amount of ink noting that not one law has been adopted by Congress on oil and gas drilling. A cursory look at the ever-forceful efforts of the oil and gas industry lobby makes this totally unsurprising.

Marcus Barum writes in the Huffington Post, that "despite introducing more than 150 bills to improve the safety and oversight of offshore drilling and holding more than 60 hearings to discuss the spill's causes and consequences with regulators, oil company officials, grieving relatives and Gulf-area fishermen," no bills have been adopted, and only two made it to the Senate.

"The oil industry has a veritable army at its disposal. They spend tens upon tens upon tens of millions on federal lobbying and campaign efforts," David Levinthal of the Center for Responsive Politics told Salon.

Although the 2009 lobbying figure ($175 million) was greater than the amount spent the year of the Deepwater Horizon explosion, Levinthal said, "Make no mistake, 2010 was still a big year for oil and gas industry lobbying."

"If oil and gas lobbying wasn't at the degree it is, we might see a very different situation today in terms of legislation," Levinthal said.

Not only is lobbying expenditure vast, but the lobby size (representing every big company from BP to ExxonMobil to ConocoPhillips) is greater even than the size of Congress itself. "Seven hundred and eighty-eight lobbyists represented the various entities in the industry in 2010, and 500 of them had previously worked for the federal government in some capacity at some time," Levinthal said.

This is a considerable wall of lobbyists for any legislation to work its way through.