Huckabee trashes Glenn Beck for calling him a progressive 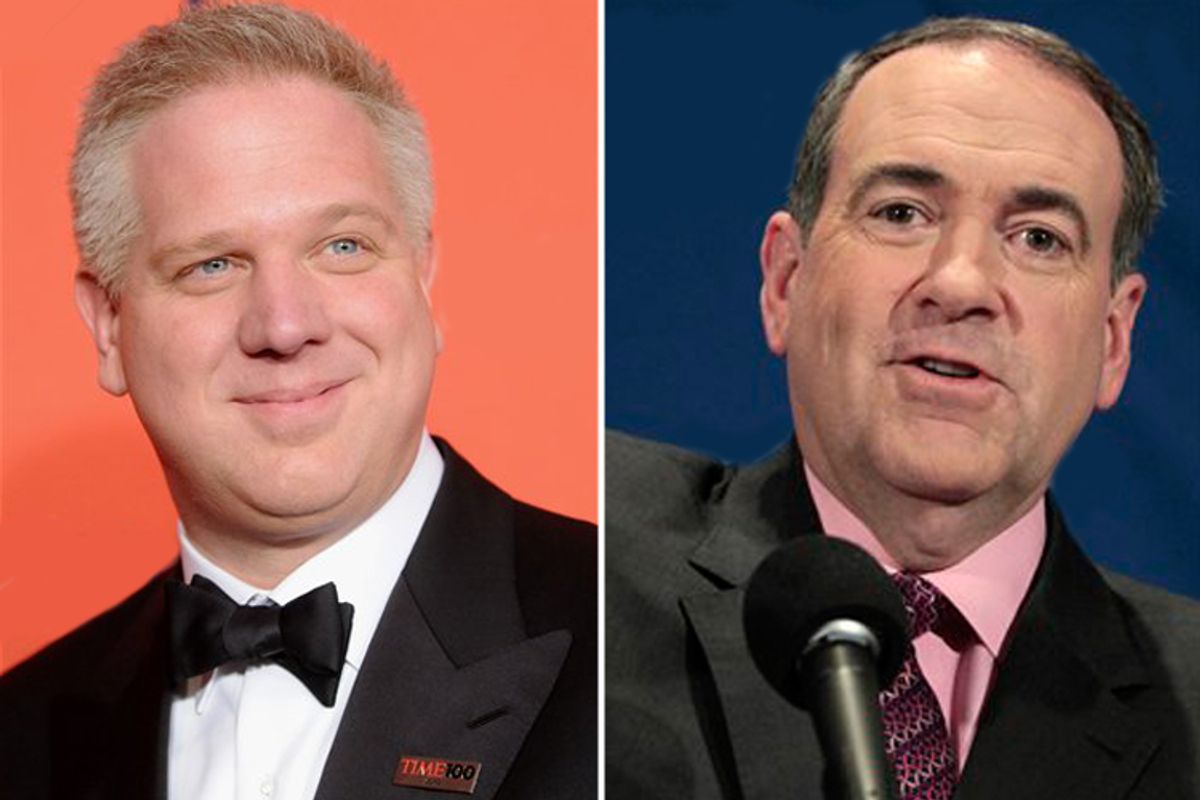 Huckabee's crime? He supports Michelle Obama's anti-obesity initiative, because modern-day culture-warrior right-wingers do actually think encouraging healthy behavior for children is an infringement on liberty. And because of that suppot, Huckabee is clearly a left-wing Nazi Progressive -- "like John McCain" -- who conspired with McCain to ... sabotage the Romney campaign, in 2008. (???)

Beck and Huckabee are actually both in the same business -- TV and related marketing ventures -- and, for now at least, hustle on the same channel. Huckabee is a Fox talk show host, (the fact that he seems to enjoy being a Fox talk show host may yet save us from his presidency) and Beck is soon leaving his daily hour-long history lecture and therapy session.

So Huckabee responded to Beck with a post on his PAC's website. And it is a very entertaining response. It does not really pull any punches:

This week Glenn Beck has taken to his radio show to attack me as a Progressive, which he has said is the same as a “cancer” and a “Nazi.” What did I do that apparently caused him to link me to a fatal disease and a form of government that murdered millions of innocent Jews? I had the audacity—not of hope—but the audacity to give respect to the efforts of First Lady Michelle Obama’s Let’s Move campaign to address childhood obesity. I’m no fan of her husband’s policies for sure, but I have appreciated her efforts that Beck misrepresented—either out of ignorance or out of a deliberate attempt to distort them to create yet another “boogey man” hiding in the closet that he and only he can see. The First Lady’s approach is about personal responsibility—not the government literally taking candy from a baby’s mouth. He seems to fancy himself a prophet of sorts for his linking so many people and events together to describe a massive global conspiracy for pretty much everything. Sadly, he seems equally inept at recognizing the obvious fact that children are increasingly obese and that we now see clinical evidence of diseases in children that as recent as 20 years ago were found only in adults, such as Type 2 diabetes. The costs to our nation are staggering in increase health care expenses, but it even effects national security with now 75% of young men between the ages of 17 and 24 are unfit for military service primarily due to obesity! His ridiculous claim that John McCain and I collaborated and conspired in the 2008 campaign is especially laughable. Is he not aware that McCain and I were competitors---not cohorts? Beck needs to stick to conspiracies that can’t be so easily de-bunked by facts. Why Beck has decided to aim his overloaded guns on me is beyond me. But he ought to clean his gun and point it more carefully lest it blow up in his face like it did this time.

I think Huck wrote this himself, in a hurry (it's clearly unedited), which is pretty funny, and probably not the sort of thing a man running for president would be allowed to do.