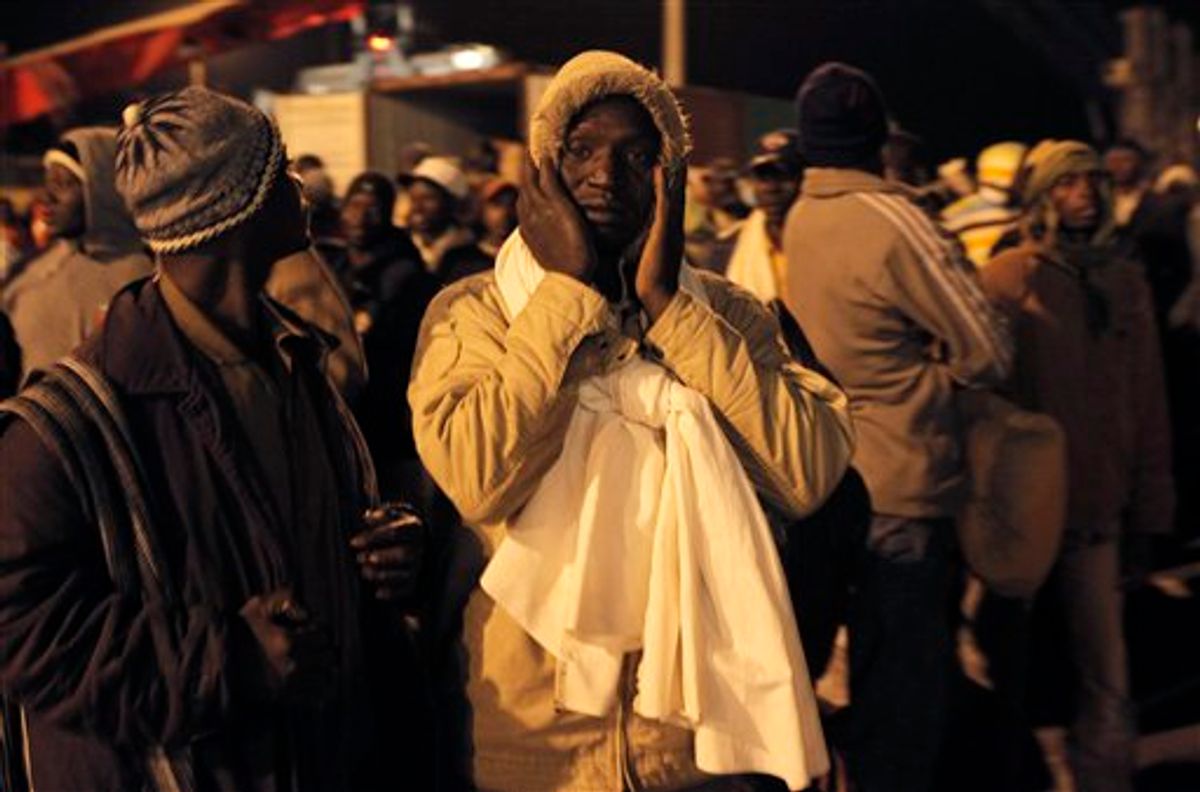 A stranded foreign refugee reacts after being informed that his name is not on the passengers list as a ship evacuating wounded Libyans and refugees fleeing conflict zone is scheduled to leave the port of Misrata, Libya Wednesday, April 20, 2011. Inside the besieged city of Misrata, spent rockets protrude from the pavement of a parking lot, unarmed teenagers prepare plastic crates of Molotov cocktails, and fighters at roadblocks sit inside empty shipping containers outfitted with furniture, carpets and generator-powered TVs and watch Al-Jazeera reports of their war with Moammar Gadhafi. (AP Photo/Nasser Nasser) (AP)
--

A Libyan rebel leader said Thursday that opposition forces have control of a post on the Tunisian border near a former rebel-held town, which could open a new channel for anti-government forces in Moammar Gadhafi's bastion in western Libya.

In the rebel stronghold of Benghazi in eastern Libya, meanwhile, relief workers and medical teams awaited the arrival of a passenger ferry carrying about 1,000 people -- mostly Libyan civilians and workers from Asia and Africa -- out of the besieged city of Misrata, the main rebel holdout in Gadhafi's territory.

Also aboard the vessel were the bodies of an Oscar-nominated documentary maker from Britain and an American photographer who were killed covering clashes Wednesday. A day earlier, the ferry arrived in Misrata, delivering food and medical supplies to the beleaguered population.

The reported capture of the border crossing followed three days of intense fighting outside the desert town of Nalut, about 140 miles (240 kilometers) southwest of the capital Tripoli, said a rebel leader, Shaban Abu Sitta. The area was in hands of anti-government forces last month before Libyan troops moved in.

Holding the Dhuheiba border crossing could open important supply routes for anti-Gadhafi forces and give the rebels another foothold in western Libya. The claim could not be independently verified. Moammar Gadhafi's forces have sharply restricted the movement of journalists in the areas they control in western Libya.

On the Ionian Spirit ferry -- part of a maritime lifeline to Misrata -- Libyan civilians and migrants workers packed the decks, hallways and every other available space. In the ship's Panorama Bar, evacuees tossed mattresses onto the wooden dance floor. Women slipped behind a curtain to change.

The injured were brought to the lower level of the ship, where an 11-member medical team set up a makeshift intensive care unit.

Jeremy Haslam, a coordinator from the Geneva-based International Organization for Migration, said the boat has more than 1,000 evacuees including 239 Libyan civilians and 586 migrants from Niger and others from Africa and Asia.

He said some Libyans tried to flee Misrata aboard a tug boat, but were turned away because the vessel was overcrowded. Some managed to get aboard the ferry.

"We are carrying more than we are supposed to but it's better than letting these people leave on a tugboat," said Haslam.

The number of people seeking to flee Misrata has surged as Libyan forces expand their shelling to areas once considered relatively safe havens from attacks.

"Our neighborhood became a war zone so we had to get out," said Faiza Stayta, who made it aboard the ferry with her husband and two children. "All the firing is random. You hear a rocket and how have no idea if it will come down on your house."

The vessel carried the bodies of Chris Hondros, a New York-based photographer for Getty Images, and British-born Tim Hetherington, co-director of the 2010 Afghanistan war documentary "Restrepo" that was nominated for an Academy Award. The film was co-directed by Sebastian Junger, author of "The Perfect Storm."

They were killed Wednesday in an attack that also injured two other photographers. A statement from Hetherington's family said he was killed by a rocket-propelled grenade. The ship also held the body of a Ukrainian doctor killed Wednesday from an artillery blast, said Haslam of the IOM.

The group is planning to send another ship to Misrata carrying 500 tons of food and medical supplies. The IOM said it has evacuated more than 3,100 people from Misrata.

Hubbard reported from aboard the Ionian Spirit.