With "Water for Elephants," the actor tries to leave "Twilight" behind. Too bad he can't stop glowering. 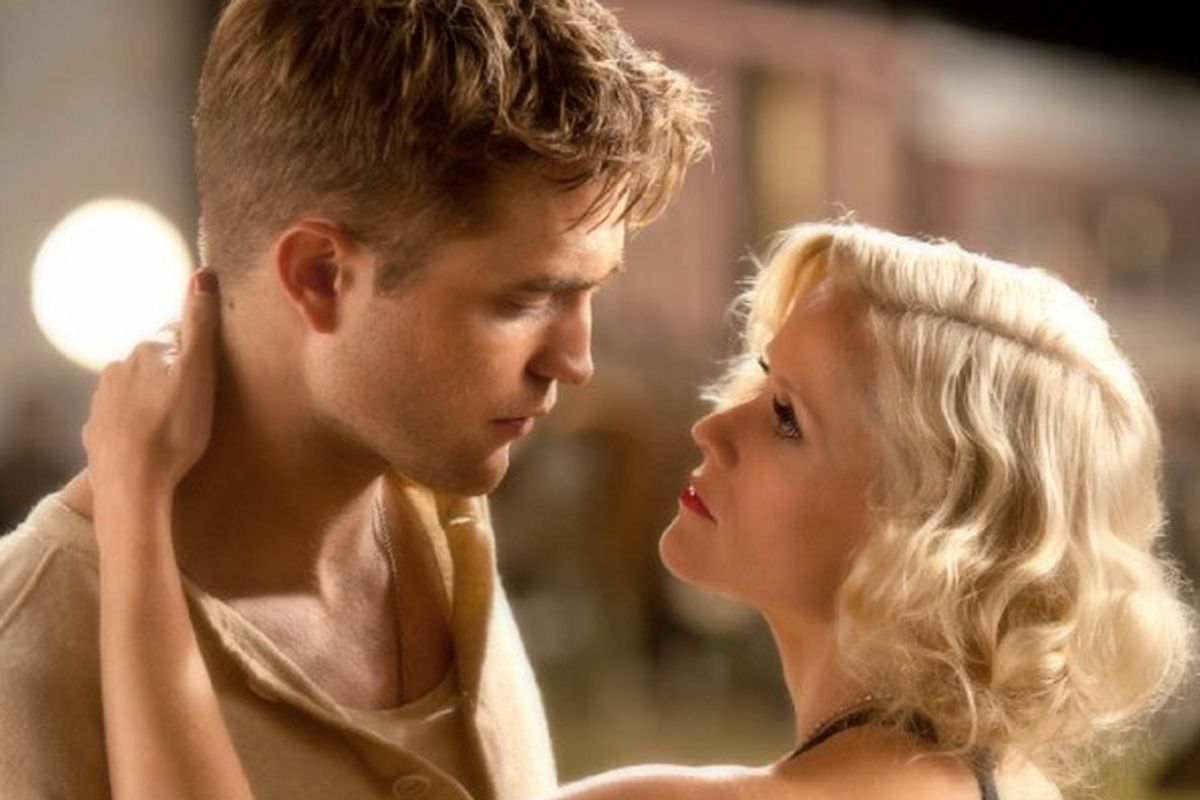 Robert Pattinson and Reese Witherspoon in "Water for Elephants"
--

Robert Pattinson has a lot riding on the new romantic drama "Water for Elephants," which opens Friday. Namely, can the young actor, who has made his name in the "Twilight" sagas, transition from broody teen heartthrob to broody adult actor?

The 25-year-old British actor faces a career conundrum that many other young, frenzy-inciting men have faced in the past: Can you make the ladies still love you even when they're past adolescence? Can you prove your marquee value in fare that has grown-up -- and dude -- appeal? Johnny Depp did it. Will Smith did it. Even Justin Timberlake did it. And they did it following much the same path Pattinson now does: by choosing projects that took them just far enough outside of their comfort zone that the work seemed somehow new, all while keeping their loyal fan bases reassured. But there's one big difference: the charm factor.

Pattinson's been testing the waters of career expansion for some time, in smaller films like "Little Ashes," where he played Salvador Dalí, and "How to Be," a comedy in which he played a Gus so gloomy Edward Cullen would beg to lighten up. Now, as Jacob, the narrator of "Water for Elephants," Pattinson cuts yet another bleak figure.

In the midst of the Depression and on the cusp of receiving his veterinary degree, Jacob's parents are killed, leaving the destitute Jacob to forge an unlikely new life working with animals at a broken-down traveling circus. Jacob shuffles along the rails. Jacob worships Marlena, the beautiful star attraction married to the boss, from afar. Jacob pounds his fists. Jacob has the sads. Often. He spends approximately 80 percent of the movie in full hooded-eyes mode. You know how they say to find one thing and do one thing well? Well, Pattinson's thing is glowering.

It doesn't help matters that the movie itself is so painfully mediocre. (A colleague's highest praise consisted of the observation that "It looks very expensive.") The circus people are colorful and fun-loving, except the ones who are unstable and violent. And while Reese Witherspoon wears gorgeous costumes, she reserves the bulk of her tender chemistry for her other costar, Rosie the elephant. There is not a moment of authentic-looking heat between the two human leads, a deficiency that at least wasn't an issue in the admittedly guilty pleasure of "Twilight." But the problem isn't just miscasting or the cheesiness of the material. It's Pattinson's increasingly predictable, dour persona.

As it happens, just hours after I attended the "Water for Elephants" screening, I was sitting in a theater watching Pattinson's old "Goblet of Fire" costar, Daniel Radcliffe, on Broadway in "How to Succeed in Business Without Really Trying." Radcliffe, adorable and slight of frame, has spent considerably less of his professional life smoldering than Pattinson has, even if he does share impeccable cred from the "supernatural BS id messing up my adolescence" school of acting. And, having seen his performance in "Equus" in 2008, I can attest that Radcliffe scores just fine as the dark, messed-up guy who can do sex scenes. But imagine if the roles were reversed; would Pattinson be game enough to attempt to be a song-and-dance man? Would he ever go on television and breathlessly sing the Periodic Table? Pattinson may have the male model good looks and the serious new movie, but it's Radcliffe, bravely flailing around in a bow tie, who seems the more evolved performer.

An actor can have a fine ride as a leading man without ever being funny (hello, Russell Crowe!). But a smile can kill in ways a vampire bite never will. Even Leonardo DiCaprio, who had to claw his way out of the teen heartthrob ghetto himself, and still sticks mostly to playing damaged goods, proved with his rakish turn in "Catch Me If You Can" he can seduce without being grim. And men like George Clooney and Brad Pitt, more than 20 years into their careers and still giving handsome lessons for a living, regularly infuse a lightness and humor into their work that makes them irresistible. James Franco, who can pout with the prettiest of them, is a full-fledged weirdo. Mark Wahlberg has gone from shirtless heartthrob to Oscar-nominated serious actor -- as well as scene-stealing Will Ferrell costar. And Robert Downey Jr.? Two words: Tropic. Thunder.

So what's going to happen to Pattinson, who these days seems well on his way to becoming the most tiresome leading man since Kevin Costner? Sure, maybe if you're trying desperately to control your Mormon vampire urges all the time, you don't have much to giggle about. But star quality -- and sex appeal -- contain a healthy dose of fun. The question for Pattinson isn't whether he can sulk his way into adult credibility. It's whether he, like a truly great leading man, can show us he's got any boyish appeal to spare.