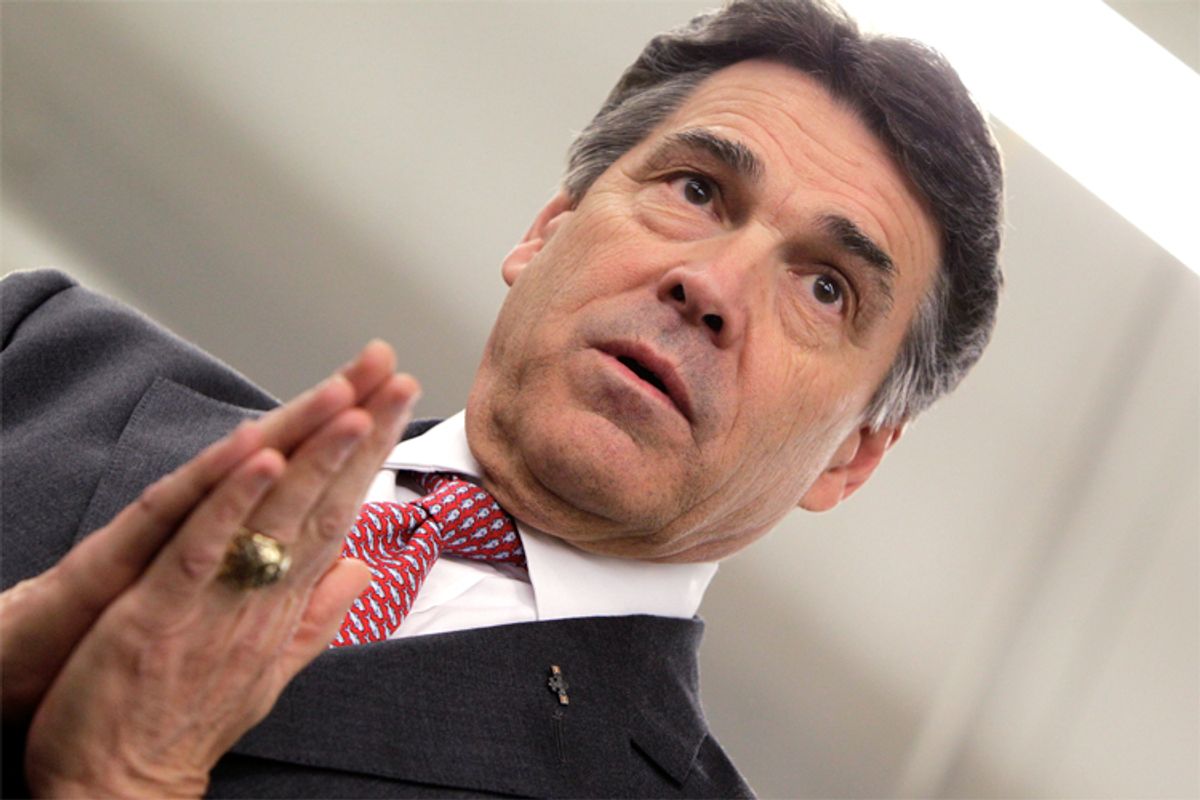 After months of a historically unprecedented drought, devastating wildfires are raging across more than a million acres of the state of Texas.

Republican Gov. Rick Perry's response? He's officially declaring the next three days as "Days of Prayer for Rain in the State of Texas."

WHEREAS, throughout our history, both as a state and as individuals, Texans have been strengthened, assured and lifted up through prayer; it seems right and fitting that the people of Texas should join together in prayer to humbly seek an end to this devastating drought and these dangerous wildfires;

NOW, THEREFORE, I, RICK PERRY, Governor of Texas, under the authority vested in me by the Constitution and Statutes of the State of Texas, do hereby proclaim the three-day period from Friday, April 22, 2011, to Sunday, April 24, 2011, as Days of Prayer for Rain in the State of Texas. I urge Texans of all faiths and traditions to offer prayers on that day for the healing of our land, the rebuilding of our communities and the restoration of our normal and robust way of life.

Notwithstanding the disclaimer that one should never directly connect the dots between any single weather event and larger patterns of climate change, it seems like it is at least worth mentioning that the Dust Bowl conditions currently asserting themselves in Texas, Oklahoma and elsewhere in the Southwestern United States are exactly the kind of climatic catastrophe that the United States Geological Service has predicted is likely to occur as temperatures continue to rise.

Which bring us to an ironic crossroads, particularly insofar as God might be concerned. As befits the national headquarters of the energy industry, Texas has long been a flag bearer for climate skepticism, from the halls of Congress to the pages of public school textbooks. And just across the border in Oklahoma we have Sen. James Inhofe, perhaps the single most dedicated critic of climate science in the entire U. S. Congress. It's almost too classic -- let's ignore all the science that might help prepare us to confront the challenges of the future, and then, when disaster hits, we'll just do a rain dance! It's not like we're, uh, civilized or anything.

So I ask the good citizens of Texas to consider whether, as they bow their heads in prayer, they might not have it all backward. God isn't going to alleviate their misery. On the contrary, God is punishing them for their flagrant disregard of the human impact on his (or her) beauteous creation!

Doesn't that make at least as much sense as the idea that Hurricane Katrina was God's punishment for legalized abortion? Clearly, in Texas, God is mad about something.