No matter how many times Republicans claim cutting taxes leads to increased revenues, it's still not true 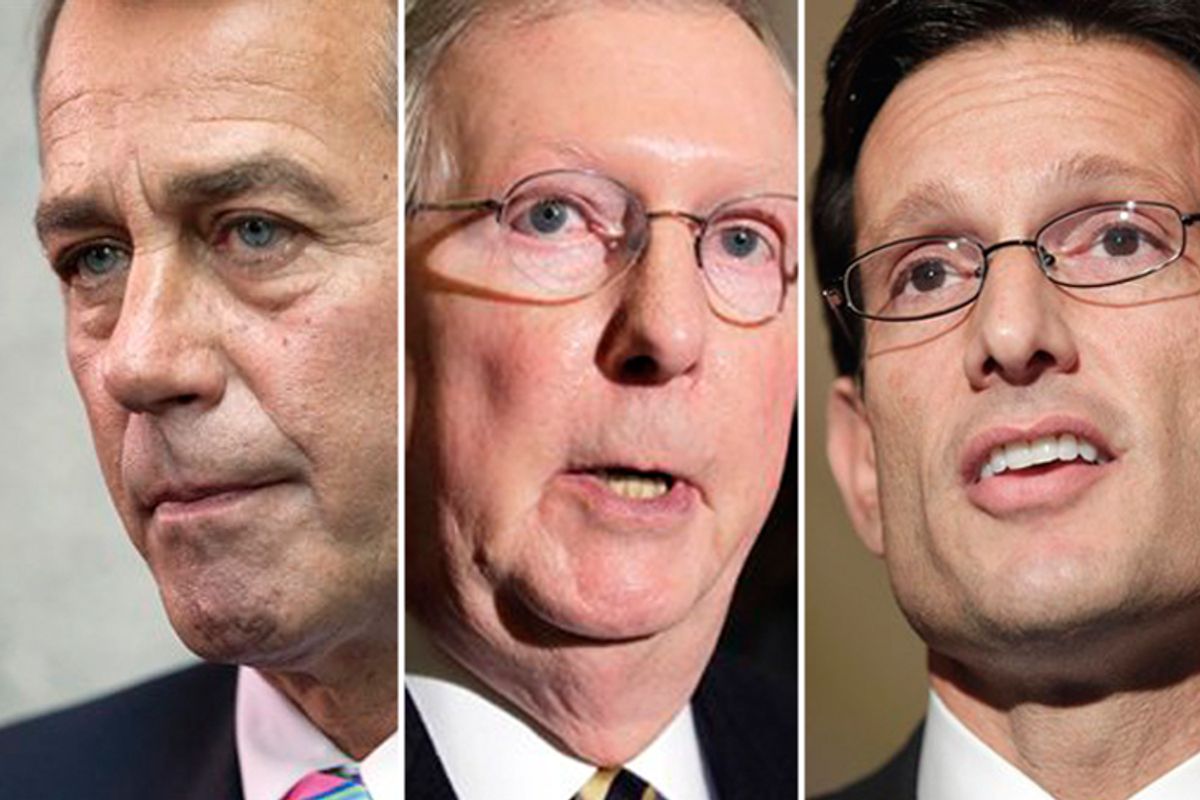 Republicans are nothing if not consistent. Despite all evidence to the contrary, they stick to the script. There's no better proof of this than their adherence to that classic fundamental pillar of supply-side economics: the theory that cutting taxes raises revenues.

"In the '80s, federal revenues went up," said Walsh. "We didn't cut spending. Revenues went up in the '80s. Every time we've cut taxes, revenues have gone up. The economy has grown."

Walsh may be a freshman in Congress, but he's got the party line down pat. Here's Senate Minority Leader Mitch McConnell saying in July that the Bush tax cuts "increased revenue, because of the vibrancy of these tax cuts in the economy. " Here's Speaker of the House John Boehner saying last June that " over the last 30 years... lower marginal tax rates have led to a growing economy, more employment and more people paying taxes," he said.

If you look at the raw numbers of federal tax revenue over the last 40 years, you will notice a striking phenomenon -- the numbers almost always go up, except in the case of deep recessions. This is basically a function of population growth, and it happens whether taxes are cut, or raised.

But the raw totals don't tell you much, because of inflation. In 2006, Time business columnist Justin Fox adjusted the raw federal tax income revenue totals for inflation, and discovered an interesting thing. Revenue fell in the first few years after both Reagan and Bush's tax cuts, before growth resumed. In 2008, Paul Krugman adjusted for both inflation and population growth, to try to figure out the per-capita tax revenue increase for each decade since Reagan, and found something even more enlightening. Real revenues per capita rose 19 percent from 1980-1988. From 1992-2000, real revenues per capita rose 41 percent -- after tax hikes by both George H. W. Bush and Bill Clinton! And the numbers for George W. Bush? Pure disaster.

Of course, George Bush's term ended in economic Armageddon, which always plays hell with statistics. The rise and fall of the business cycle needs to be taken into account when comparatively judging revenue increases or decreases. But the consensus view of most of the economists who have attempted to sort this out is that in general, tax cuts do not pay for themselves by increasing revenue -- unless you are moving down from an extremely high tax bracket.

This is not a liberal/conservative partisan divide issue. Greg Mankiw, who served as chair of George Bush's Council of Economic Advisers, has flatly declared that the claim that broad-based tax cuts will raise tax revenue is not "credible." (An early edition of his economics textbook called the advisers who told Reagan otherwise "charlatans and cranks.") Under the direction of Douglas Holtz-Eakin, who later become a senior economic adviser to John McCain during the 2008 election campaign, the Congressional Budget Office studied the effects of a ten percent tax cut and came to a similar conclusion in 2005:

The budgetary impact of the economic changes was estimated to offset between 1 percent and 22 percent of the revenue loss from the tax cut over the first five years and add as much as 5 percent to that loss or offset as much as 32 percent of it over the second five years.

Best scenario -- a 10 percent tax cut would recoup around a 1/4 of the revenue lost.

Tax cuts are not a mechanism for generating revenue -- they're a weapon Republicans are using to cripple government.