Beck site: Huckabee does literally want the government to take candy from babies 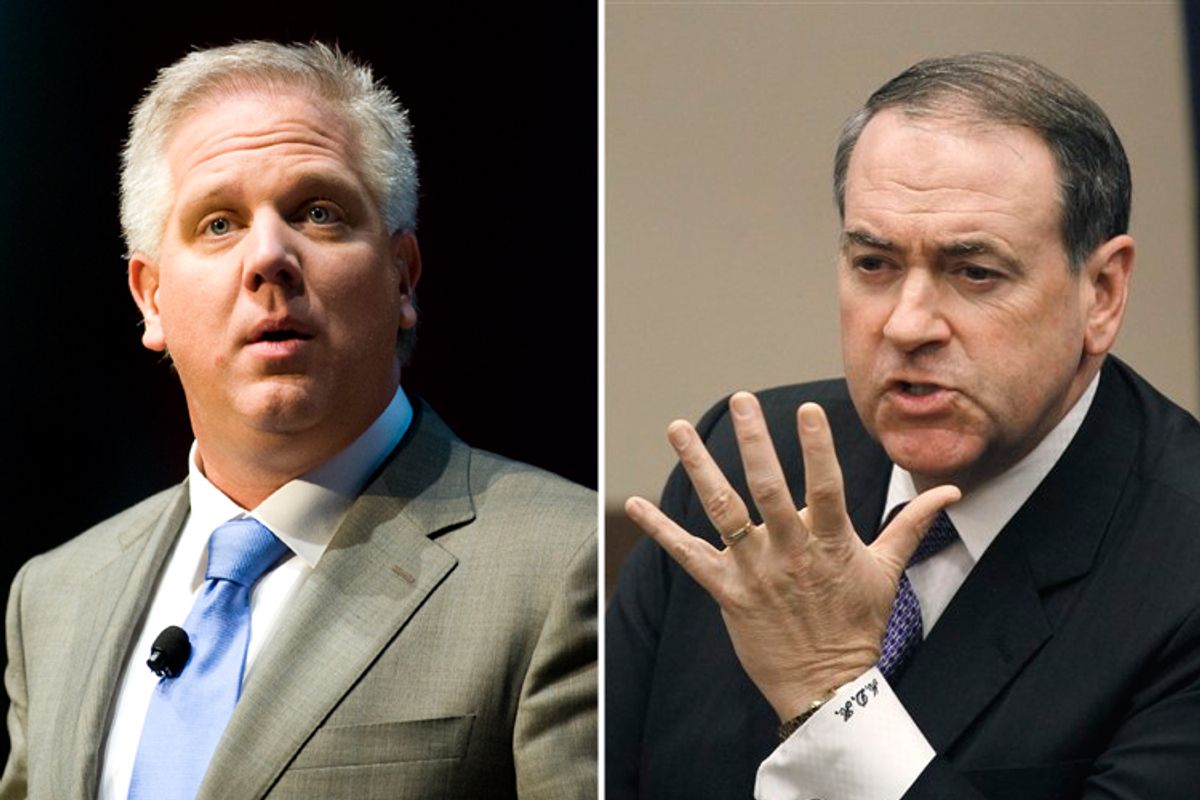 Huck struck back with an entertaining, unedited blog post calling Beck a conspiracy theorist looking for "boogey men" that "he and only he can see." "The First Lady's approach is about personal responsibility," Huckabee wrote, "not the government literally taking candy from a baby's mouth."

On the Blaze, Beck's news website, Kevin Balfe, Beck's primary ghostwriter, has responded today by calling Huckabee a liar. Because, he argues, Michelle Obama and Mike Huckabee do want to literally take candy from babies' mouths:

Michelle Obama is heading up an effort to combat childhood obesity. One of the first major initiatives of this campaign was the "Healthy, Hunger Free Kids Act of 2010." Here is what Huckabee said about it at the time: "By passing a bill that addresses the nutritional quality of school lunches, an important step is being taken to give children choices that will make them healthier and more productive."

Ok, great, so he likes the law…but what does that law actually do? Well, according to USA Today: "it gives the USDA the authority to set nutritional standards for all foods regularly sold in schools during the school day, including vending machines…"

To translate, the FEDERAL GOVERNMENT will have DIRECT CONTROL over whether or not certain foods–say a Milky Way bar–can be put into a vending machine at a public school.

With me so far?

Ok, so now for the big reveal…the Huckabee Lie. In his public statement attacking Glenn, here’s what he claims:

“I’m no fan of [Michelle Obama's] husband’s policies for sure, but I have appreciated her efforts that Beck misrepresented—either out of ignorance or out of a deliberate attempt to distort them to create yet another ‘boogey man’ hiding in the closet that he and only he can see. The First Lady’s approach is about personal responsibility—not the government literally taking candy from a baby’s mouth.”

Actually, Governor, no. I know you‘re so immune to political spin that you probably don’t even recognize it anymore, but THAT’S EXACTLY WHAT THIS ACT THAT YOU SUPPORT DOES.

I know the definition of the word "literally" has drifted a bit since Joe Biden took office, but unless this bill calls for jackbooted USDA thugs to storm into public schools and rip Milky Ways directly from the mouths of ... babies who are in school for some reason, then no, this act does not actually take candy from babies.

There is, in fact, absolutely nothing in this bill stopping any public school student from bringing an entire crate of delicious candy bars to school and eating each and every one of them during recess. Our freedom to begin the process of eating ourselves to death as early as possible is still safe!

While Balfe characterizes the bill, and Obama's campaign in general, as "federal intervention in local issues like school lunch nutrition," the USDA already "intervenes" in school lunches (the National School Lunch act is more than 60 years old) and sets nutritional standards for government-subsidized meals. (Of course, demanding healthier school lunches without giving schools a lot more money to spend on food is pretty unrealistic but on the other hand LIBERTY DON'T TREAD ON ME FOUNDERS FREEDOM etc. etc.)