Beware the "middle ground" of the Great Budget Debate

The center of America isn't halfway between the two parties. It's overwhelmingly on the side of the Democrats 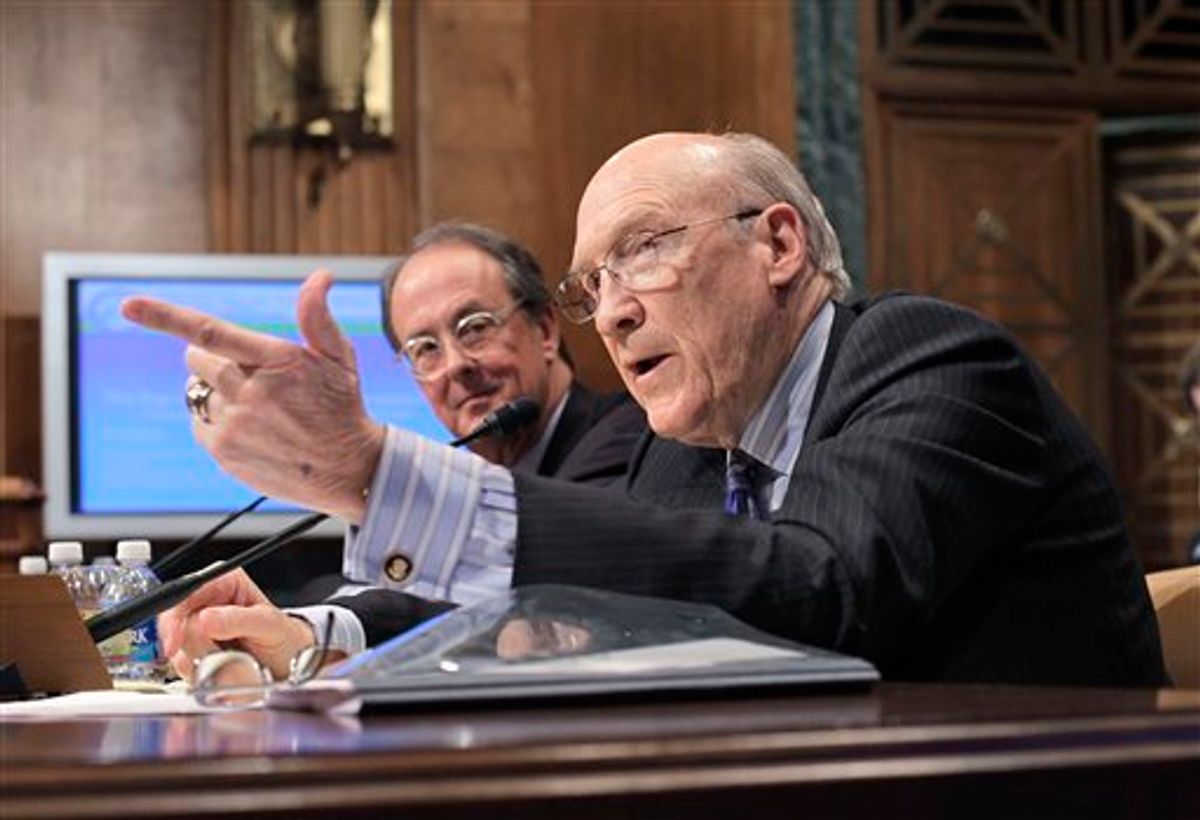 FILE - In this March 8, 2011 file photo, National Commission on Fiscal Responsibility and Reform, Co-Chairmen Alan Simpson, right, and Erskine Bowles, testify on Capitol Hill in Washington. Dont look for President Barack Obama to endorse a Medicare voucher plan or turning Medicaid over to the states when he unveils his approach to controlling the governments health care costs on Wednesday. But less government money for providers and more costs shifted to beneficiaries will still be in the plan. The president is expected to draw from proposals issued by his debt commission and from the work of a small group of senators of both parties trying to devise a strategy that will force Congress to deal with the cost of health benefits. (AP Photo/J. Scott Applewhite, File) (AP)
--

How debates are framed is critical because the "center" or "middle ground" is supposedly halfway between the two extremes.

We continue to hear that the Great Budget Debate has two sides: The President and the Democrats want to cut the budget deficit mainly by increasing taxes on the rich and reducing military spending, but not by privatizing Medicare. On the other side are Paul Ryan, Republicans, and the right, who want cut the deficit by privatizing Medicare and slicing programs that benefit poorer Americans, while lowering taxes on the rich.

By this logic, the center lies just between.

According to the most recent Washington Post-ABC poll, 78 percent of Americans oppose cutting spending on Medicare as a way to reduce the debt, and 72 percent support raising taxes on the rich -- including 68 percent of Independents and 54 percent of Republicans.

In other words, the center of America isn't near halfway between the two sides. It's overwhelmingly on the side of the President and the Democrats.

I'd wager if Americans also knew two-thirds of Ryan's budget cuts come from programs serving lower and moderate-income Americans and over 70 percent of the savings fund tax cuts for the rich -- meaning it's really just a giant transfer from the less advantaged to the super advantaged without much deficit reduction at all -- far more would be against it.

And if people knew that the Ryan plan would channel hundreds of billions of their Medicare dollars into the pockets of private for-profit heath insurers, almost everyone would be against it.

Which is why I get worried when I hear about so-called "bipartisan" groups on Capitol Hill seeking a grand compromise, such as the Senate's so-called "Gang of Six."

Senator Dick Durbin, Democrat of Illinois, a member of that Gang, says they're near agreement on a plan that will chart a "middle ground" between the House Republican budget and the plan outlined last week by the President.

In my view, even the President doesn't go nearly far enough in the direction most Americans would approve. All he wants to do, essentially, is end the Bush tax windfalls for the wealthy -- which were designed to be ended in 2010 in any event -- and close a few loopholes.

But why shouldn't we go back to the tax rates we had thirty years ago, which required the rich to pay much higher shares of their incomes? One of the great scandals of our age is how concentrated income and wealth have become. The top 1 percent now gets twice the share of national income it took home thirty years ago.

If the super rich paid taxes at the same rates they did three decades ago, they'd contribute $350 billion more per year than they are now -- amounting to trillions more over the next decade. That's enough to ensure every young American is healthy and well-educated and that the nation's infrastructure is up to world-class standards.

Nor does the President's proposal go nearly far enough in cutting military spending, which is not only out of control but completely unrelated to our nation's defense needs -- fancy weapons systems designed for an age of conventional warfare; hundreds of billions of dollars for the Navy and Air Force, when most of the action is with the Army, Marines, and Special Forces; and billions more for programs no one can justify and few can understand.

If Americans understood how much they're paying for defense and how little they're getting, they'd demand a defense budget at least 25 percent smaller than it is today.

Finally, the President's proposed budget doesn't deal with the scandal of the nation's schools in poor and middle-class communities -- schools whose teachers are paid under $50,000 a year, whose classrooms are crammed, that can't afford textbooks or science labs, that have abandoned after-school programs and courses like history and art. Most school budgets depend mainly on local property taxes that continue to drop in lower-income communities. The federal government should come to their rescue.

To think of the "center" as roughly halfway between the President's and Paul Ryan's proposals is to ignore what Americans need and want. For our political representatives to find a "middle ground" between the two would be a travesty.