Mitch Daniels is a "blank slate" on "foreign policy," thanks to award 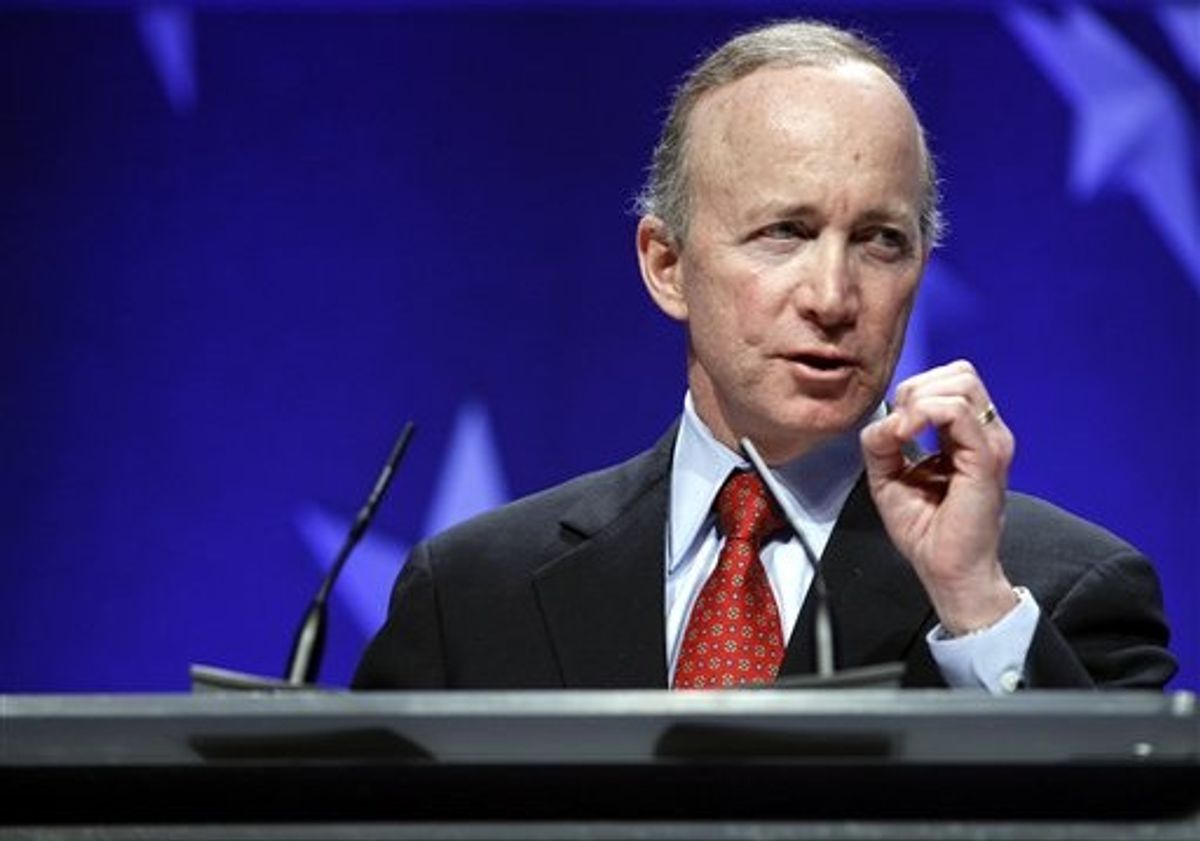 Earlier this week, I wrote about Mitch Daniels, the fantasy 2012 candidate of respectable Republicans, receiving an award from an Arab group, thus publicizing his own Arab heritage. I was a bit snide about all of this, because the Republican party has lately defined itself in part as the party opposed to the severely exaggerated domestic Muslim threat, and that opposition involves a generalized paranoia about, well, Arabs.

Some very nice Mitch Daniels fans emailed me to say that I was wrong, and that Republicans would not care about Daniels' background once they examined his record. (Of course the other problem with Mitch Daniels as a presidential candidate is that he is the sort of person who is only interesting if you care about "records.")

Commentary answers my point directly today. His heritage is totally not a big deal!

Nobody, especially not neoconservatives who have been loudly championing the cause of freedom in the Arab world, has anything against Daniels’s heritage. Nor, despite the fervent efforts of some to promote the myth that there has been a post 9-11 backlash against Muslims in this country, do many other Americans care about his origins.

Commentary's Jonathan Tobin even says that Daniels "seems like the perfect candidate" on "economic issues." So, problem solved!

But... Tobin still has some issues with Governor Daniels. It's not his Arab heritage -- it's that he is "something of a blank slate" on foreign policy. Tobin's not insinuating anything about him, he's just saying "blank slate." On "foreign policy."

See, the problem is not that Daniels himself is of Arab heritage. The problem is that he pals around with other Arabs:

Thus the news that Daniels is accepting an award from the Arab American Institute (AAI) is more than a little curious. The AAI is a left-leaning organization founded by onetime Democratic Party activist James Zogby. Although it is far more respectable than terrorist front groups like the Council on American Islamic Relations (CAIR), it has also been among the most consistent voices downplaying the threat from Islamist terror and opposing American efforts to fight back against Islamist enemies of freedom. And needless to say, like Zogby, it is no friend to the State of Israel.

Of course, Tobin eventually notes that despite his claim that Daniels is a "blank slate," Daniels has actually already received an award from the Anti-Defamation League. In other words, even though Daniels is a known ally of Israel and friend of the Jewish State, it is still suspicious that he is willing to be honored by a liberal Arab organization. A liberal Arab group with the wrong position on "foreign policy" (Israel), no less.

"Perhaps the group is unaware that Daniels is outspoken in his defense of the Jewish State," Tobin writes. Perhaps the first half of Tobin's post is similarly unaware of that fact!

I can't understand at all why any liberals would ever suggest that conservatives treat American Arabs and Muslims as guilty until proven patriotic.