A U.S. drone attack kills 23 in Pakistan, while Obama sends more on the way to Libya 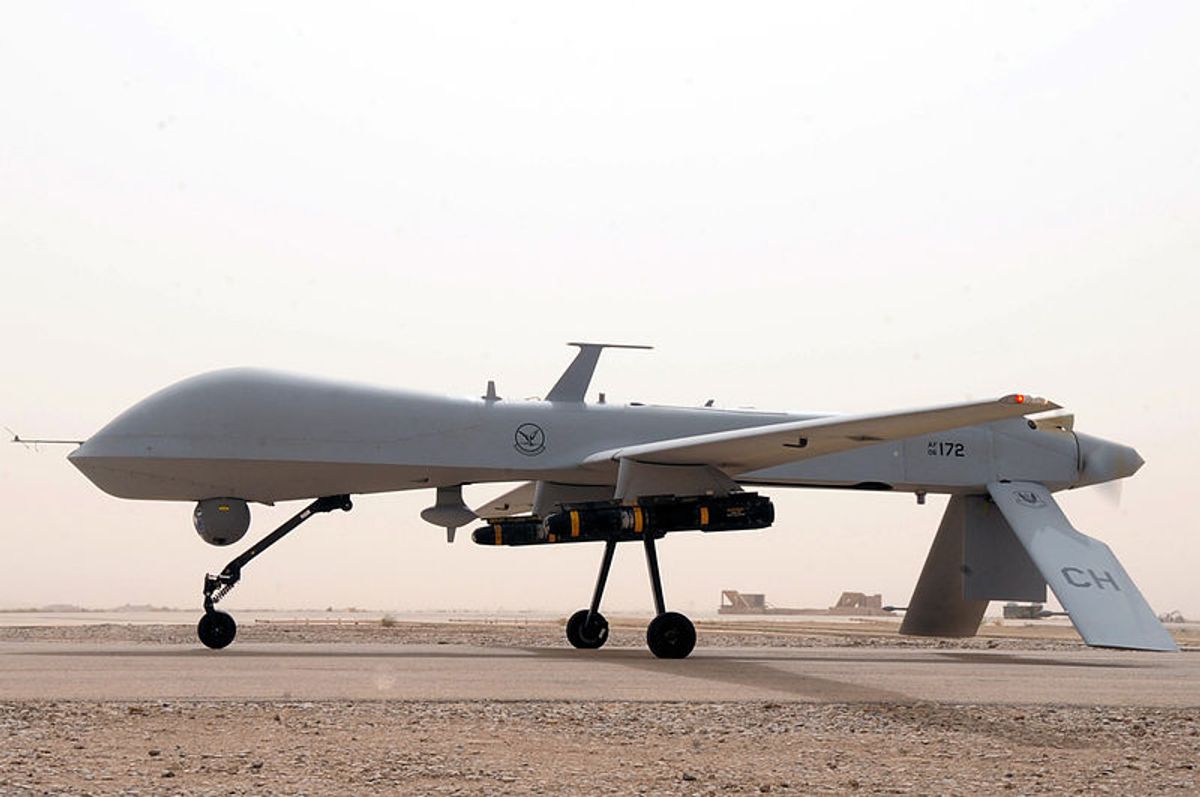 A U.S. drone attack in Pakistan killed 23 people this morning, and this is how The New York Times described that event in its headline and first paragraph:

When I saw that, I was going to ask how the NYT could possibly know that the people whose lives the U.S. just ended were "militants," but then I read further in the article and it said this:  "A government official in North Waziristan told Pakistani reporters that five children and four women were among the 23 who were killed."  So at least 9 of the 23 people we killed -- at least -- were presumably not "militants" at all, but rather innocent civilians (contrast how the NYT characterizes Libya’s attacks in its headlines: "Qaddafi Troops Fire Cluster Bombs Into Civilian Areas").

Can someone who defends these drone attacks please identify the purpose?  Is the idea that we're going to keep dropping them until we kill all the "militants" in that area?  We've been killing people in that area at a rapid clip for many, many years now, and we don't seem to be much closer to extinguishing them.  How many more do we have to kill before the eradication is complete?

Beyond that, isn't it painfully obvious that however many “militants” we're killing, we're creating more and more all the time?  How many family members, friends, neighbors and villagers of the "five children and four women" we just killed are now consumed with new levels of anti-American hatred?  How many Pakistani adolescents who hear about these latest killings are now filled with an eagerness to become "militants"?

The NYT article dryly noted: "Friday’s attack could further fuel antidrone sentiment among the Pakistani public"; really, it could?  It's likely to fuel far more than mere "antidrone sentiment"; it's certain to fuel more anti-American hatred: the primary driver of anti-American Terrorism. Isn't that how you would react if a foreign country were sending flying robots over your town and continuously wiping out the lives of innocent women, children and men who are your fellow citizens? What conceivable rational purpose does this endless slaughter serve? Isn't it obvious that the stated goal of all of this – to reduce the threat of Terrorism – is subverted rather than promoted by these actions?

Regarding the announcement yesterday that the 2009 Nobel Peace Prize winner was now deploying these same flying death robots to Libya, both The Washington Post's David Ignatius and The Atlantic's James Fallows make the case against that decision. In particular, Ignatius writes that "surely it's likely that the goal was to kill Libyan leader Moammar Gaddafi or other members of his inner circle."

I don't know if that is actually the purpose, though if Ignatius is good at anything , it's faithfully conveying what military and intelligence officials tell him. If that is the goal, doesn't that rather directly contradict Obama's vow when explaining the reasons for our involvement in the war (after it started): "broadening our military mission to include regime change would be a mistake." It already seemed clear from the joint Op-Ed by Obama and the leaders of France and Britain -- in which they pledged to continue "operations" until Gadaffi was gone -- that this vow had been abandoned. But if we're sending drones to target Libyan regime leaders for death, doesn’t it make it indisputably clear that the assurances Obama gave when involving the U.S. in this war have now been violated. And does that matter?

Finally, when the OLC released its rationale for why the President was permitted to involve the U.S in Libya without Congressional approval, its central claim was that -- due the very limited nature of our involvement and the short duration -- this does not "constitute[] a 'war' within the meaning of the Declaration of War Clause" (Adam Serwer has more on this reasoning). Now that our involvement has broadened to include drone attacks weeks into this conflict, with no end in sight, can we agree that the U.S. is now fighting a "war" and that this therefore requires Congressional approval?

A new NYT/CBS poll today finds that only 39% approve of Obama's handling of Libya, while 45% disapprove (see p. 17). That's what happens when a President starts a new war without any pretense of democratic debate, let alone citizenry consent through the Congress.